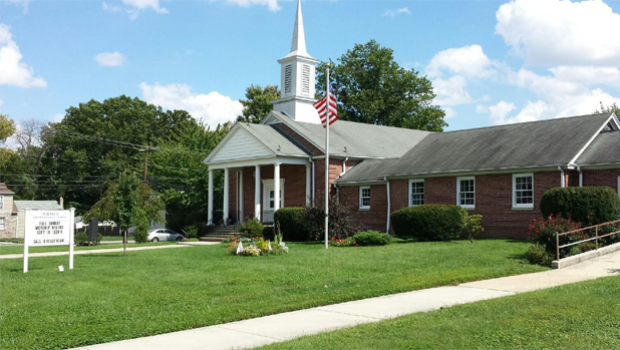 In the late 1800’s, southeastern Delaware County was composed mostly of farms. One of the main farmers was Richard Holmes. Mr. and Mrs. Holmes had three daughters and two of them, Mary and Margaret were members of the Media Presbyterian Church. These sisters were concerned that there was no Sunday School for the residents of their community. With the help of their pastor, the Rev. Dr. David Tully, and the Presbytery of Chester, the Rev. Dr. McKinney, pastor of the Chambers Church in Rutledge, was directed to investigate the need.

So it was, in God’s Providence, on Sunday, October 17, 1897, at a meeting in the Holmes sisters’ home attended by 23 residents, and under the direction of Pastor McKinney, the Holmes Presbyterian Sabbath School was organized. At first meeting, in homes (and in a tent in the summer months), the attendance increased. A Board of Trustees was formed and a lot was purchased and on November 18, 1905, ground was broken for a chapel. A half-basement-ground floor building was constructed and the first formal worship was celebrated a year later on November 16, 1906. It was a day remembered as a quartet from the huge Chester Third Presbyterian Church sang and many clergy from neighboring Presbyterian churches brought greetings.

After Pastor Innis left in 1915, the Church had no installed pastor until 1926. With the arrival of the Rev. Dr. James Earl Jackman as Pastor, the Church moved to a new, larger frame building on the Mac Dade Turnpike. It was the home of the Church for the next 28 years. It was a time of great struggle—especially through the Depression years. There were a few, brief pastorates. From time-to-time, it received Presbytery mission funds to sustain its life. Nevertheless, it was a center of community life. The stage of the Social Hall was often used for plays and musicals. It sponsored the historic Boy Scout Troop #355 which was chartered in 1933.

The larger community developed significantly during the World War II years both with industry and housing. In 1948, the young Rev. E. Bradford Davis was called as Pastor. During his tenure as Pastor—the post-war years--the community and neighboring areas experienced the great suburban housing expansion. Many young families moved into Holmes (Ridley Township) and Secane (Upper Darby Township) and the membership of the Holmes Church began to grow and grow.

The old frame church building could no longer accommodate the Holmes Church family. So, after careful planning, a new building was constructed and on February 7, 1954, the Holmes Church family followed a band, with horns blaring and flags waving, and marched down Holmes Road to its new and present home. By God’s grace, the Church continued to grow and flourish.

Reflecting the rapid growth of the community, Holmes Church was awash with children. Under the leadership of the new pastor, the Rev. Gilbert J. Ward, the Church built a Christian Education building and dedicated it on February 17, 1963. The Church continued to grow in the mid-60’s reaching its peak membership of nearly 600. Filling an educational void in the community, the Church began the first and popular preschool program in the area housed in our new educational facility.

The Rev. Dr. J. William Carpenter was called as the eighth Pastor of Holmes Church in the fall of 1969. During his long pastorate, many events have been celebrated and changes occurred. Filling a community need, the Church established a very successful Holmes Leisure Club for senior citizens in 1972. In 1975, it established its noted Memorial Hand Bell Choir. From time-to-time, the Church has hosted four Holmes Community Days on its campus. Through its long successful Youth Ministry, it also now hosts a community floor hockey league for youth and parents. For more than 50 years, our Church women have hosted an annual Women’s Ecumenical Tea attended by women from some 25 community churches. For more than 50 years, we have hosted an important annual Vacation Bible School for our church and community children. We are pleased to sponsor our historic Boy Scout Troop, a Cub Scout and a Girl Scout Troop. We are grateful to be able to host an Alcohol Anonymous support group and a Heroin Anonymous support group for our community.

During our 110 year history, the Holmes Church has seen incredible cultural and community changes, but its call to witness and share the Gospel with our community remains the same. Like the larger Church, Holmes Church has seen many changes as we have tried to adapt to the ever changing world around us but continue to present the unchanging message of salvation through our Savior and Lord Jesus Christ. As we move into our unknown future, we do so in faith that God will graciously continue to use us in this community for its welfare and for his honor and praise.