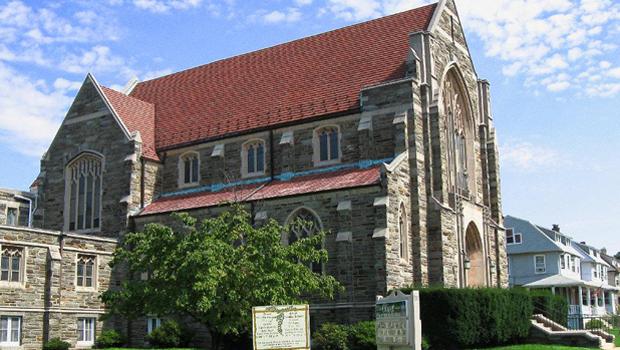 When the Presbytery of Chester received a petition from a group of people in Moore, Pennsylvania, as the town was known at that time, to be organized as a church, it delegated the responsibility to its Outlook Committee.

The first worship service of Olivet Presbyterian Church was held on October 27, 1889 in Galloway Hall. It was located on the southwest corner of 10th and Lincoln Avenues, in Prospect Park, Pennsylvania.  The actual organization of the ecclesiastical body was accomplished February 24, 1890 by a committee of Chester Presbytery.  Olivet considers the October 27, 1889 date our anniversary date.  In October of 2014, we celebrated our 125th anniversary. Although the rail station is still called Moore, the community is now the Borough of Prospect Park.

The original Chapel and Sabbath School building, often referred to as “the little church in the field” was erected in 1904-05 under the pastorate of the Reverend Ervrit S. Boice.  With the growth of the congregation and community, the need for larger and improved facilities for our Church and Sabbath School was discussed and a “Building Fund” was begun in 1919.  The sanctuary included a two manual pipe organ with 1,427 pipes.  Music continues to be an important part of us praising God with our voices. The first preaching service in the new building was held on December 4, 1927.  It was dedicated on March 4, 1928.  Continued growth led to the original Chapel and Sabbath School Building being razed and construction began on the new Christian Education Building in 1963 which was completed in 1964.

Presently Olivet seeks to serve our community with love, and encouragement followed by action. We accomplish this goal by identifying and then meeting the needs in our community.  Firmly established programs such as hosting Vacation Bible School (which began in 1920) and Youth Ministry still continue today.  In more recent years, additional programs have begun to meet the ever changing and growing needs of our community.

In September of 2009 the “Beacon of Hope” outreach program opened at Olivet.  The program was the result of a Girl Scout Gold Award and senior-student high school project which was organized by a young member of Olivet.  “Beacon of Hope” offers new and gently used clothing for sale to adults and children of all ages, at a nominal cost.  We have reached out to people affected by fire or other hardship and provided clothing free of charge. The profits from the Beacon of Hope are used to support our youth programs, local food pantry and many other church programs.

A continuing ministry of our Deaconate is the Taylor Hospital program.  Twice a month, free bag lunches are given to individuals waiting in the family rooms for their loved ones.  It is a ministry that has been well received since it began. In additional to our Taylor Hospital program, we also provide gift cards to the Interboro School District guidance counselors to help support the families of children in our schools who are struggling.

Recently, Olivet has teamed with Family Promise of Delaware County.  Family Promise is a program that offers food and shelter to families in need.  Twice a year Olivet hosts families in the church for one week.  We provide a place to sleep, food and activities in an effort to ease their struggles.