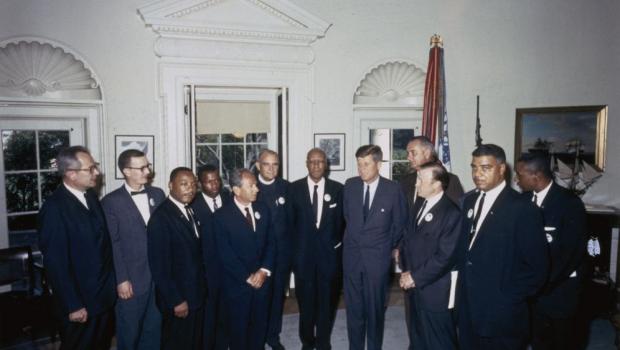 In commemoration of the 50th year since President John F. Kennedy's death, we'd like to share images and two audio recordings from PHS's collections: Eugene Carson Blake's statement on the assassination, and the memorial service for the president from the 6th General Assembly of the National Council of the Churches of Christ in the U.S.A.

Blake and Kennedy met in 1961, shortly after the President's inauguration. At the time, Blake was heading a delegation from the United Presbyterian Church in the U.S.A., and each man was moving through his personal transition from passive disapprobation of segregation to active resistance to it. They met again following the March on Washington in August 1963, Blake moving to the rear during the photo op, placing other men in the spotlight.

Blake and Kennedy met again that September to continue their discussion of civil rights. Blake invited Kennedy to speak at the upcoming triennial general assembly of the National Council of Churches of Christ, scheduled for December in Philadelphia. The agenda was to deal mainly with the organizational structure of the NCC, but the president was assassinated November 22 in Dallas, and the scheduled keynote became a eulogy, delivered by Blake. In Blake's first public statement following the events in Dallas, he reminds us of the threats made against Kennedy -- by everyone from radicals in the John Birch Society and the White Citizens' Councils to ordinary folks in the Dallas Junior League -- and holds that these people share collective responsibility for his murder:

Those who have been making irresponsible attacks upon him and his policies are as much responsible for his death as the one who pulled the trigger.

On December 3, 1963, the ten thousand people gathered at Philadelphia’s Convention Hall heard Blake pray that a “monstrous wrong be transformed into a great right,” and offer the audience the solace of Matthew, “Blessed are they that mourn [...].”