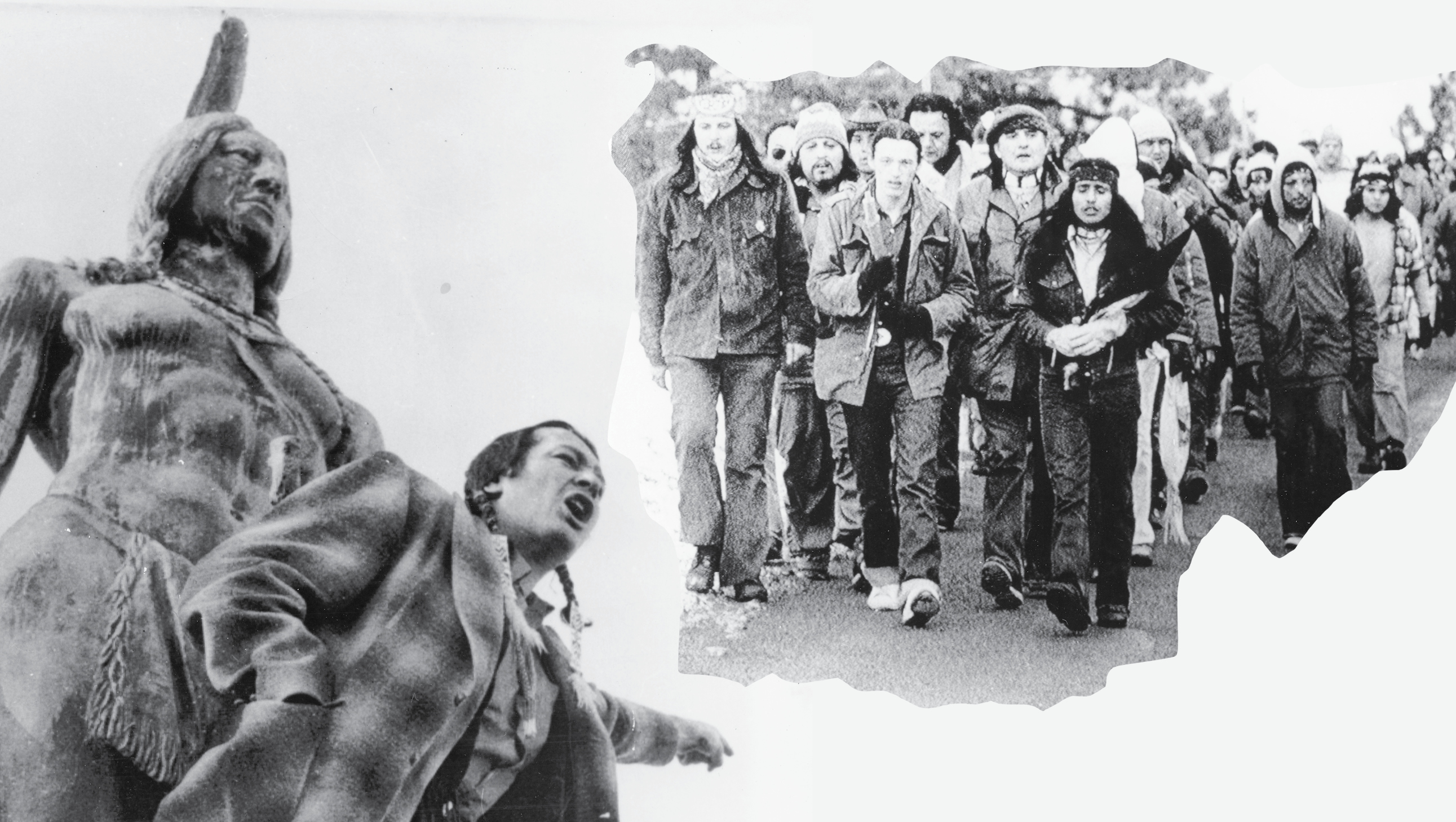 In 2019, with grant support from the National Endowment for the Humanities, PHS digitized nearly 500 images from the RNS photograph collection all of which are now viewable in Pearl. The photographs chosen for the project spanned various years, topic, faiths, and geographical locations, but all supported the Religious News Service’s mission to document twentieth century religious and ethical issues for a wider audience.

Thanksgiving is a holiday enjoyed and celebrated by many across the nation. Every year, we gather with our family and friends to break bread and give thanks for our blessings. How you celebrate the holiday may vary: gobbling up some turkey, watching football on the couch, or volunteering at food kitchens.

Yet for Indigenous Peoples of this land, Thanksgiving may not feel like a cozy day of gratitude. This Thanksgiving, we’re sharing stories from our Religious News Service photograph collection which encapsulate moments when Native Americans raised their voices for equal treatment, the rightful return of their lands, and to be viewed as human rather than “other.” 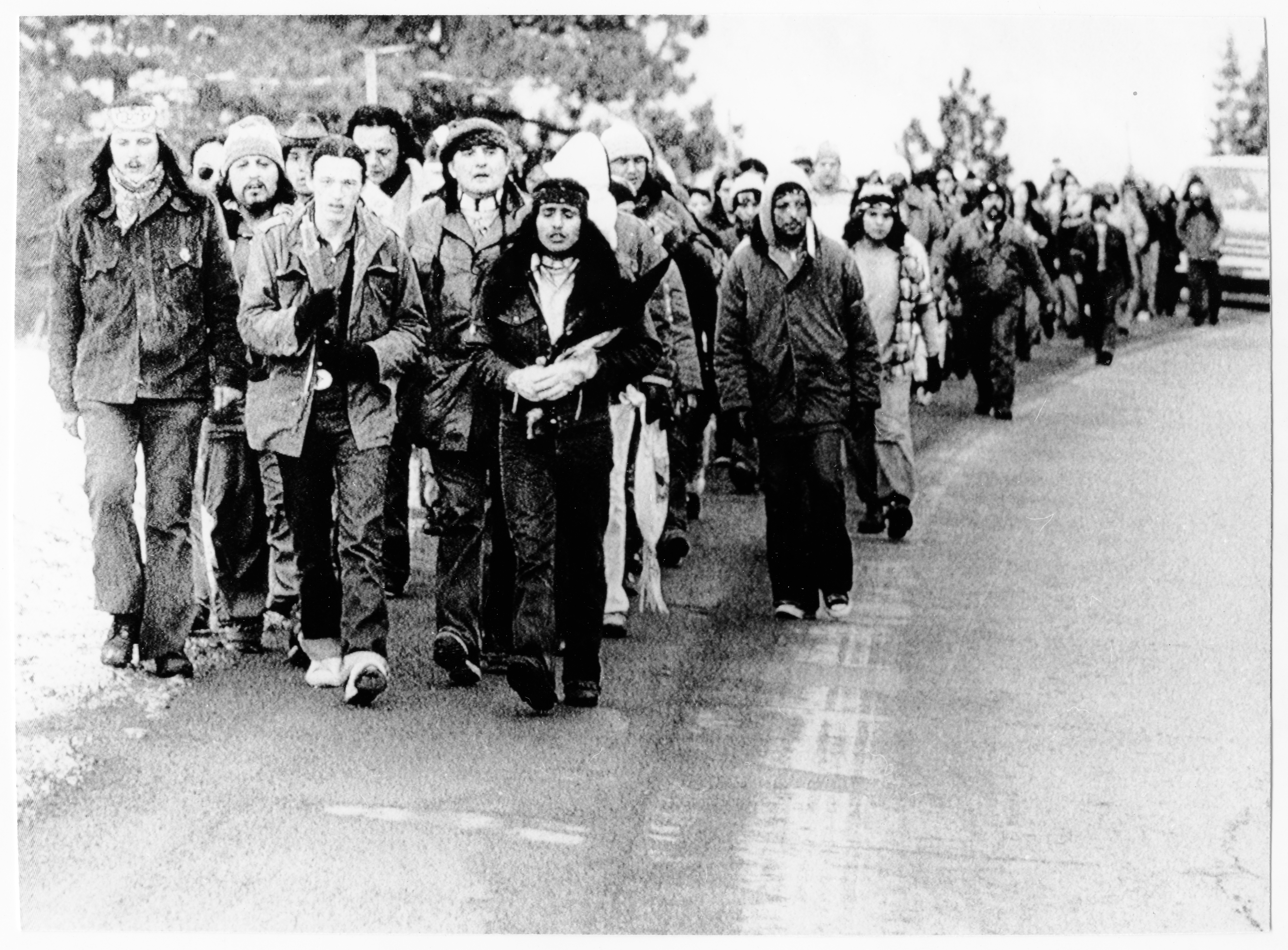 A group of Indian protestors during the first leg of their "long walk" from Sacramento to Washington to dramatize opposition to "anti-Indian" legislation in Congress. Reno, 1978. [Pearl ID: islandora:293400]

In February of 1978, over two thousand protestors gathered in California marched across the country to Washington, D.C. The 2,800-mile trek was designed to draw attention to poor conditions for Native Americans, including lack of job opportunities and housing. Even more critically, Congress was set to vote on 11 pieces of legislation that would put Native rights in jeopardy. The proposed bills would limit rights to tribal self-government, hunting and fishing, and crucial federal welfare programs.

Organized by Dennis Banks, one of the co-founders of the American Indian Movement, the demonstrators made their way to the Capitol to protest the impending legislation. While most of them travelled via bus, car, or train, some protestors decided to march on foot for five months straight in everything from freezing snow to blisteringly high temperatures. The “Longest Walk”, as it came to be known, was heavily covered in the media and garnered support from high profile figures such as Marlon Brando, Muhammad Ali, and Jane Fonda.

In July, the protestors gathered at their destination. For two weeks, they held rallies and demonstrations in Washington, D.C., culminating in the presentation of a manifesto that laid out their rights and demands. The manifesto was eventually introduced to Congress by California Representative Ronald Dellums. At the end of the two-week period, the protestors were able to return home with a victory under their belts: Congress did not pass any of the 11 harmful bills into law. However, the fight for Native American rights has not seen substantial progress since the Longest Walk concluded that summer. 50 years later, history repeated itself—in 2008 a new generation of activists organized the Longest Walk 2. 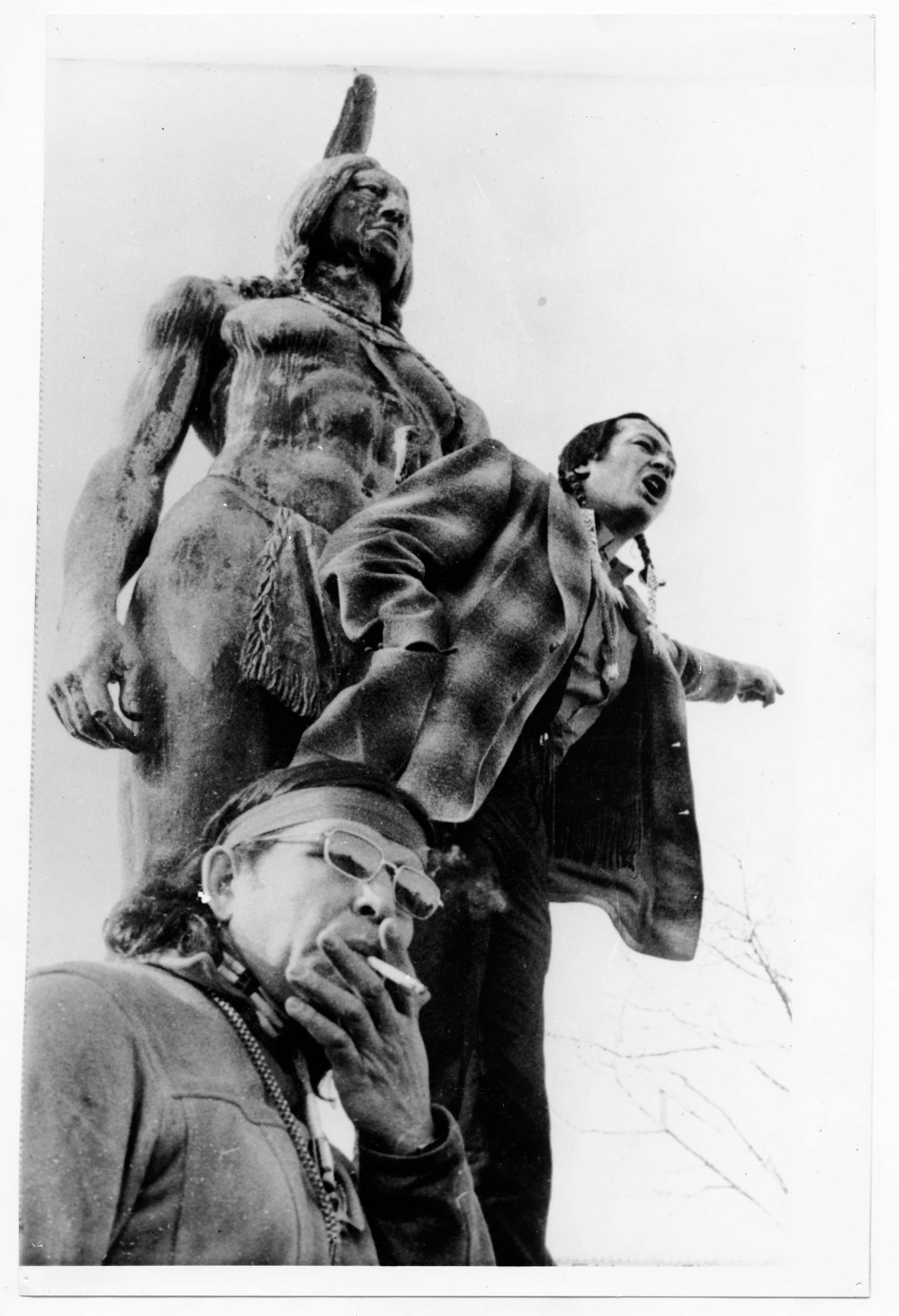 An Indian addresses a crowd from the statue of Massosoit during a Thanksgiving Day demonstration in Plymouth, Mass. Members of some 25 tribes gathered who are attempting to make Thanksgiving Day a day of national mourning for the American Indian. 1970. [Pearl ID: islandora:293414]

On Thanksgiving Day in 1970, a demonstration gathered at the statue of Massasoit near Plymouth Rock, Massachusetts. Massasoit, the Wampanoags sachem, is credited with greeting the Pilgrims at the site in 1620 and being a part of what is known in American history as the “first Thanksgiving.” However, the group assembled at the statue in 1970 were not there to celebrate the holiday, but to mark the first of a new tradition: the National Day of Mourning.

To commemorate the 350th anniversary of the Pilgrims arriving at Plymouth Rock, the Commonwealth of Massachusetts tasked Frank “Wamsutta” James, the leader of the Wampanoag Tribe of Gay Head, with delivering a celebratory speech. However, the speech that James wrote did not match the Commonwealth’s intended cheerful tone. They vetoed it and provided him with a new government-approved script, which depicted the relationship between Pilgrims and Native Americans as harmonious and mutually beneficial. James refused to deliver the new speech because it did not reflect the reality of Native Americans losing their lands, their religion, and their customs when the English came across the Atlantic. As the United American Indians of New England framed it, “He refused to speak false words in praise of the white man for bringing civilization to us poor heathens.”

The silencing of Frank “Wamsutta” James inspired him to instead take his original speech to the statue of Massasoit on Cole's Hill for a counter-event to the Commonwealth’s Thanksgiving festivities. The rally had a goal beyond drawing attention to the grim realities of the holiday’s 17th century origins. The protest called out the very real mistreatments of Native Americans of today, including political prisoner Leonard Peltier.

Every year since 1970, the United American Indians of New England have held the National Day of Mourning in lieu of Thanksgiving. In 2020, during the COVID-19 pandemic, the UAINE streamed the demonstration online for the first time, with thousands of people joining the livestream. 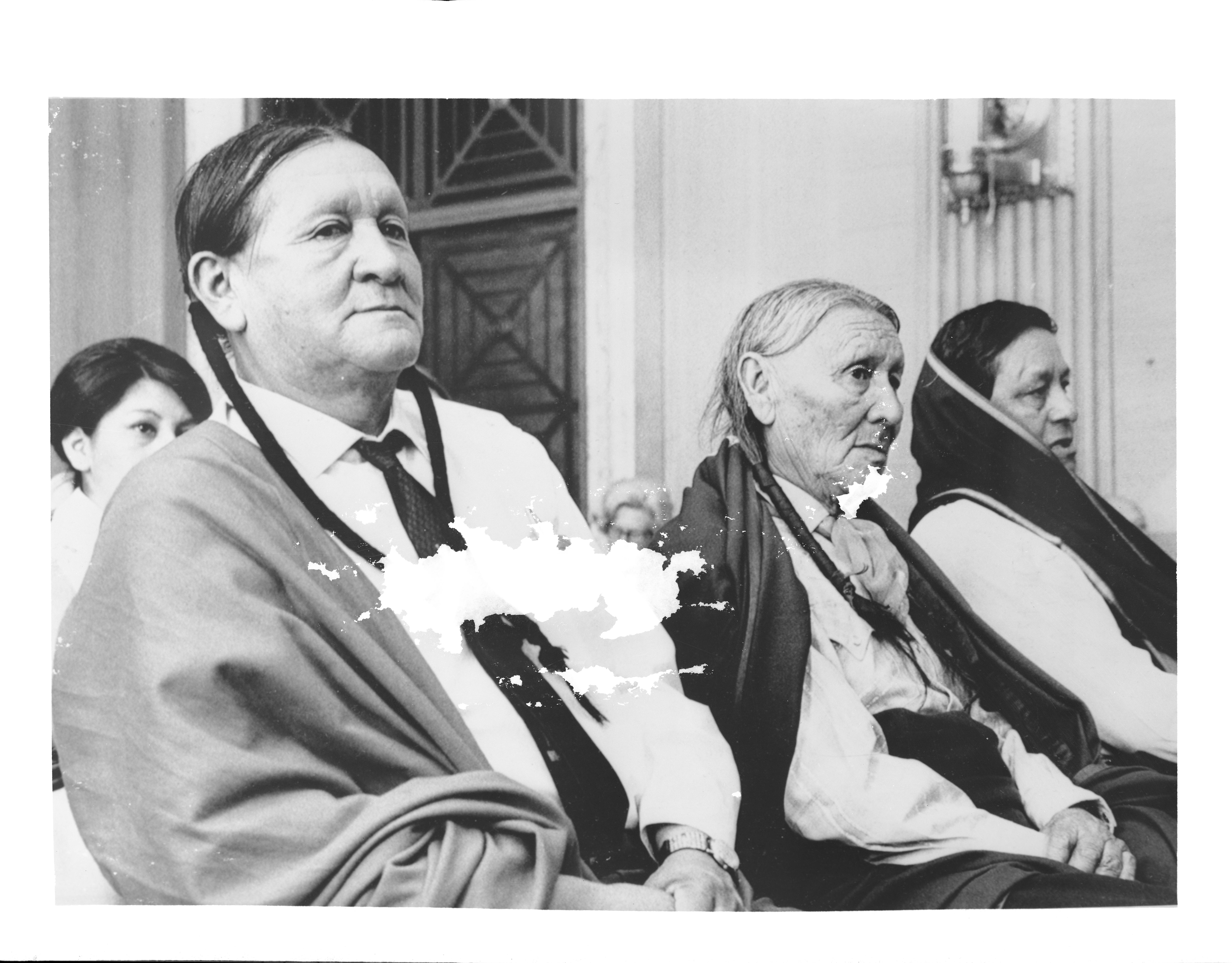 In 1968, representatives of the Taos Pueblo nation, Severino Martinez and Paul J, Bernal, appeared before a Senate subcommittee on Indian Affairs with a big goal–the return of 48,000 acres of land. The land in northern New Mexico, known as Blue Lake, was not just any land--it was sacred land of the Taos Pueblo people. The federal government had stolen the land in 1906 and gave it to the National Forest Preserve.

Prior to this Senate testimony, the House of Representatives had already passed a bill in favor of returning Blue Lake to the Taos Pueblo nation. However, the battle towards this moment was not an easy one. The 1906 decision to steal the land was immediately greeted with pushback from the Office of Indian Affairs. Blue Lake was a lifeline for the Taos Pueblo people, providing food and water access. It also served as a sacred site for the nation and used for religious and spiritual practices.

The fight over Blue Lake dragged on for decades. The Taos Pueblo people were adamant that they did not want financial compensation for the land (which was proposed a few times over the years.) Instead, their goal was simple: the rightful return of their land.

In December 1970, President Richard Nixon signed the HR471 bill, which transferred legal ownership of the lake and the surrounding mountain area back to the Taos Pueblo nation. Blue Lake became restricted to outside visitors so that the Taos Pueblo nation could use and care for their sacred land in privacy.

The monumental decision was a victory for the Taos Pueblo nation. Its impact helped other Indigenous peoples, including the Yakima and the Zuni, to reclaim their sacred sites. In addition, the bill further led to the passage of the Indian Self-Determination Act and aided in the passing of the American Indian Religious Freedom Act.

Today, Blue Lake remains under the protection of the Taos Pueblo people.

The Presbyterian Historical Society would like to acknowledge the original inhabitants of the land on which our building sits: the Lenapehoking (Lenni-Lenape).