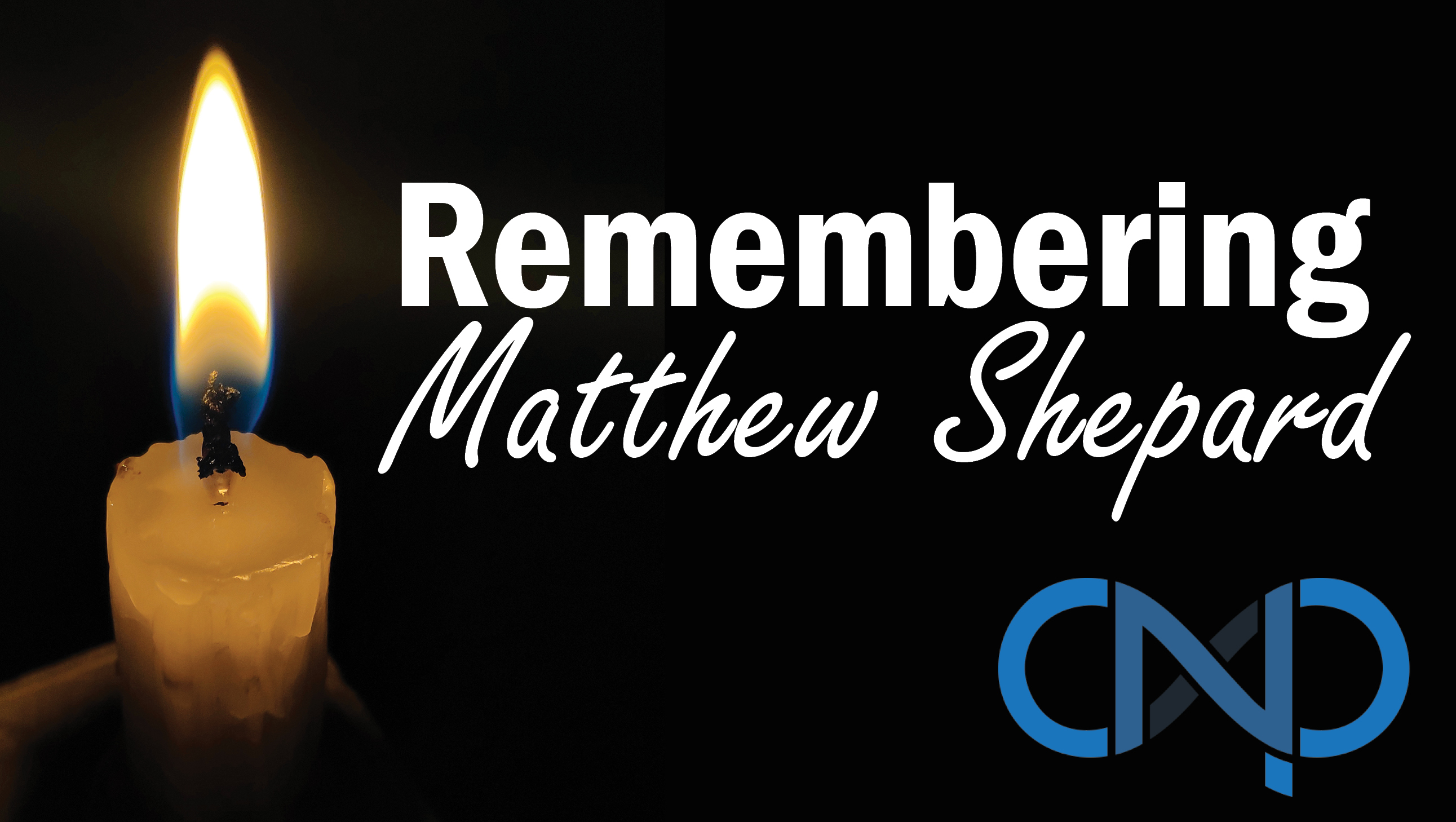 This story contains content that may be distressing to readers including accounts of violence and the actions of hate groups against the LGBTQIA+ community.

“We are particularly saddened that some have used the language of religion to insult his family with suggestions that his life was somehow less valuable. The Lord we worship and proclaim made no mention at all of sexual orientation, and welcomes, calls, and redeems all people.”

These were the words of John Buchanan and Bob Bohl, the co-moderators of the Covenant Network of Presbyterians, in a statement they released in late October of 1998 in response to the brutal murder of Matthew Shepard.

Shepard was a freshman at the University of Wyoming, 21-years-young and studying political science, when he was murdered. He was an openly gay man, and already a leader on his campus, though he was only a first-year student. The night he was attacked, Shepard had spent the afternoon meeting with friends to plan their campus’s LGBT awareness week. Later that night, he was lured out of a bar by two strangers who feigned queerness in order to gain his trust. The two strangers were Russell Henderson and Aaron McKinney. They were the same age as Shepard.

Henderson and McKinney beat Shepard, took his wallet, and kidnapped him. A mile or so from the bar where they met him, the two men tied Shepard to a rough log fence and continued to berate and beat him. After beating Shepard within an inch of his life, the two grabbed his shoes and left him there, tied up to a fence in the middle of the Wyoming countryside. He was found 18 hours later with four skull fractures and other injuries. He never regained consciousness. Shepard passed away five days after he was attacked.

The murder of Matthew Shepard sparked both outrage and heartbreak across the United States. Candlelit vigils were held, President Bill Clinton condemned his murderers, and the two co-moderators of the Covenant Network of Presbyterians—an organization that was fighting for full inclusivity within the Presbyterian Church, including the allowance of LGBT Presbyterians to become ordained ministers—denounced the homophobic claims that Shepard’s life was less valuable in the eyes of the Lord because he was gay.

The October statement from Covenant Network co-moderators Bohl and Buchanan.

Four days prior to the publication of the Covenant Network’s statement, the congregation of the anti-gay, homophobic Westboro Baptist Church picketed Matthew Shepard’s funeral service. Buchanan and Bohl were directly responding to the behavior and beliefs of this group, who spewed “hatred cloaked as religion.” In the press release, they express immense sadness and disappointment with those who “have used the language of religion to insult his family with suggestions that his life was somehow less valuable.”

They express gratitude to the Presbyterian Church for its most recent General Assembly, at which the church leaders authorized “the development of educational programs to teach the danger of hate groups, including those that cloak racist, anti-Semitic, and anti-gay doctrine falsely in a perversion of Christian language.”

The two co-moderators conclude their statement by recommitting themselves “to the extraordinary hospitality made incarnate in Jesus,” who invites everyone into his household, “including our homosexual brothers and sisters.” 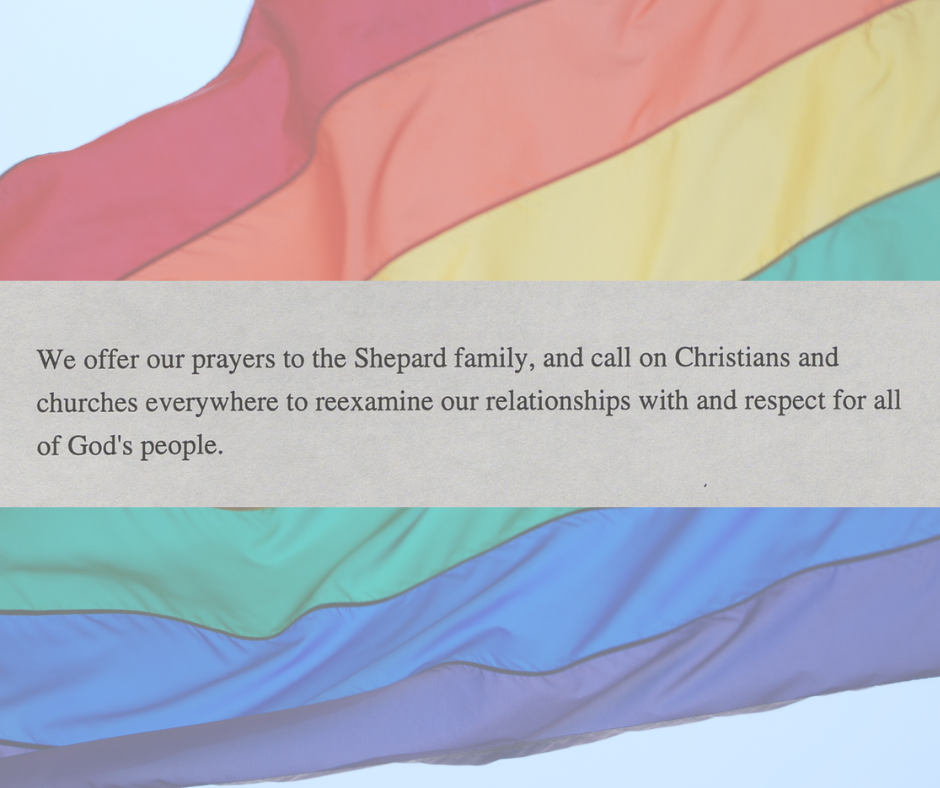 An excerpt from page 2 of the October 1998 Covenant Network of Presbyterians press release.

The murderers of Matthew Shepard are both serving two consecutive life terms in prison. When one of the two men pleaded guilty at his trial in April of 1999, the Westboro Baptist Church group returned to picket outside of the courthouse. However, a heart wrenching and memorable counter-protest took flight to prevent the homophobic churchgoers from detracting from the mourners. The moment—recreated in various forms, one of which is linked below—involved a group of people dressed in white, with angel wings made from PVC piping that extended high above their shoulders, blocking the views of the Westboro protestors. This counter-protest has been nicknamed the “Angel Action,” and has been replicated since Shepard’s murder—namely, in 2016, when the Westboro church attempted to disrupt the funerals of those murdered in the fatal mass shooting at Pulse nightclub in Orlando, Florida.

The October 1998 press release is titled “Church Leaders Denounce Hatred Cloaked as Religion.” It’s been 24 years since Matthew Shepard was brutally murdered by two men, who committed what is now recognized as a hate-crime. Unfortunately, those 20 years have borne witness to even more attacks on members of the LGBTQIA+ community. The Covenant Network has continued to denounce these attacks and hold space for the LGBTQIA+ community within the Presbyterian Church, while simultaneously working to create a safer community within the church for their marginalized brothers and sisters.