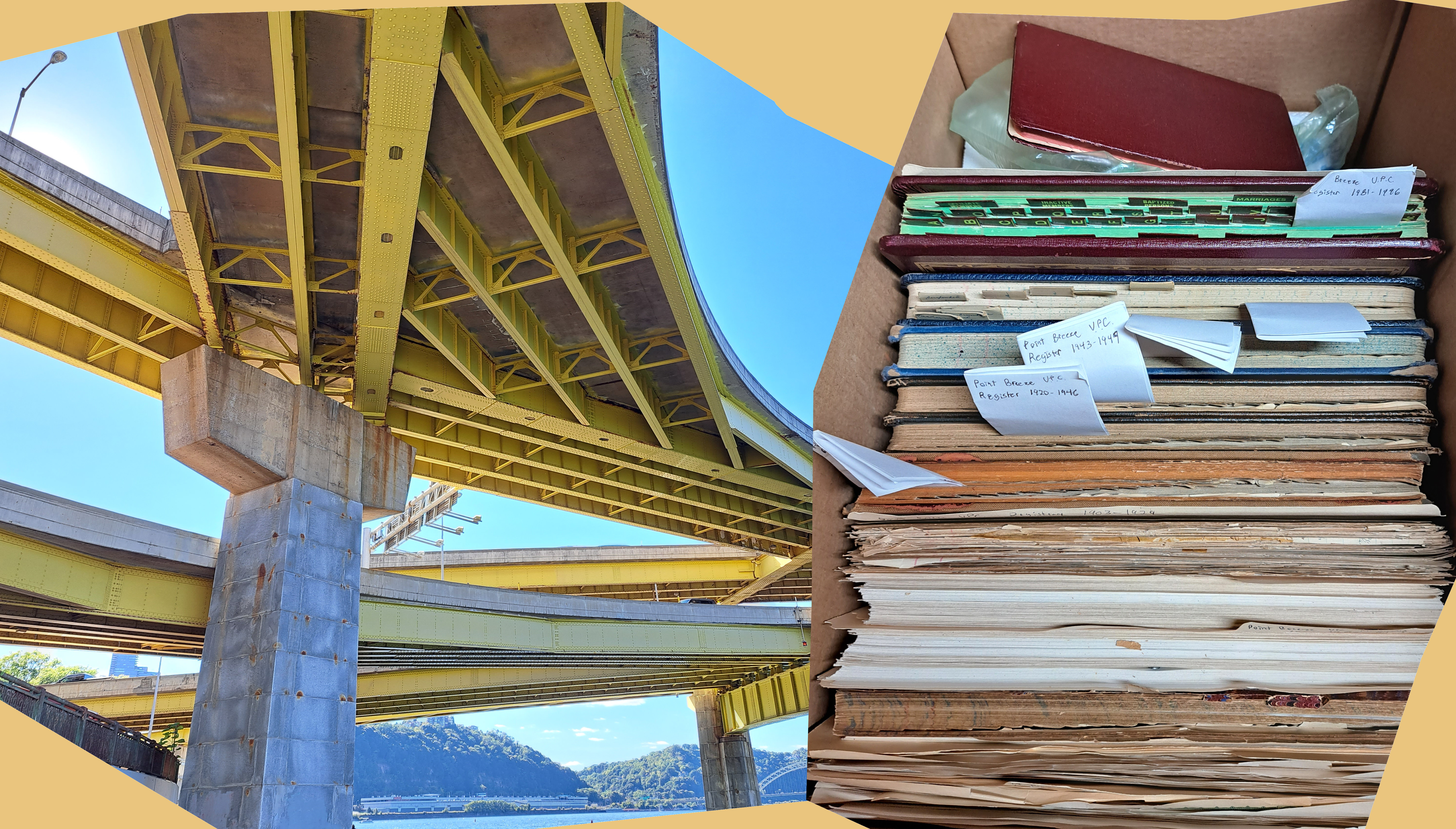 Bridges and records from Pittsburgh

For the first time in more than two years, I went on a five day barnstorming tour of two presbyteries, starting with New Castle on the Delmarva peninsula and landing in Pittsburgh. Our immense thanks go out to the people of those two presbyteries for the invitations to speak, and for their warmth and hospitality. 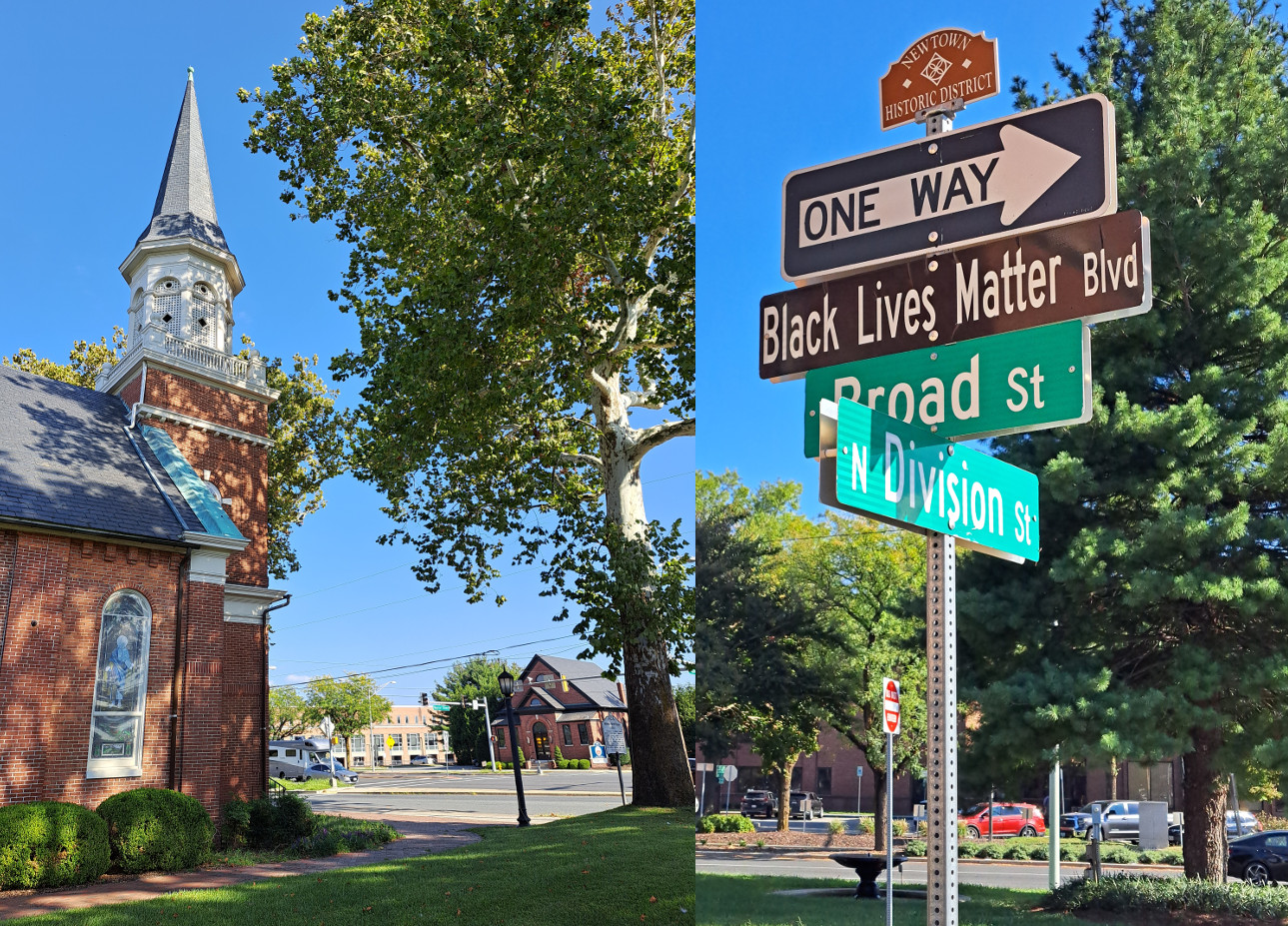 On September 20, I drove to Salisbury, Maryland, for a hybrid in-person/online meeting of New Castle Presbytery, gathered at Wicomico Presbyterian Church, one of the four congregations organized by Francis Makemie in 1683. Wicomico is now part of a downtown historic district full of churches, including a PC(USA) neighbor, Korean Presbyterian Church, just on the other side of the old graveyard.

I'd been asked to give a tour of the presbytery's history, beginning with Makemie and the early churches. We talked about Makemie's vast plantation in Accomack County, Virginia--he would wind up as the second-largest landholder in the county--his life as a merchant running a sloop from the slave economy of Virginia to the slave economy of Barbados, and the four enslaved people he and his wife inherited.

We also learned about the 18th century's struggles for religious freedom, and the contests among Presbyterians over ordered ministry and public morality. Minutes of judicatory bodies are helpful here--they tell us in dry, procedural terms what kinds of behavior constituted an offense before the community of believers. In PHS's stacks, we hold the first volume of New Castle's minutes, which includes an August 1723 passage reprimanding a minister for bathing in a creek on the Sabbath. 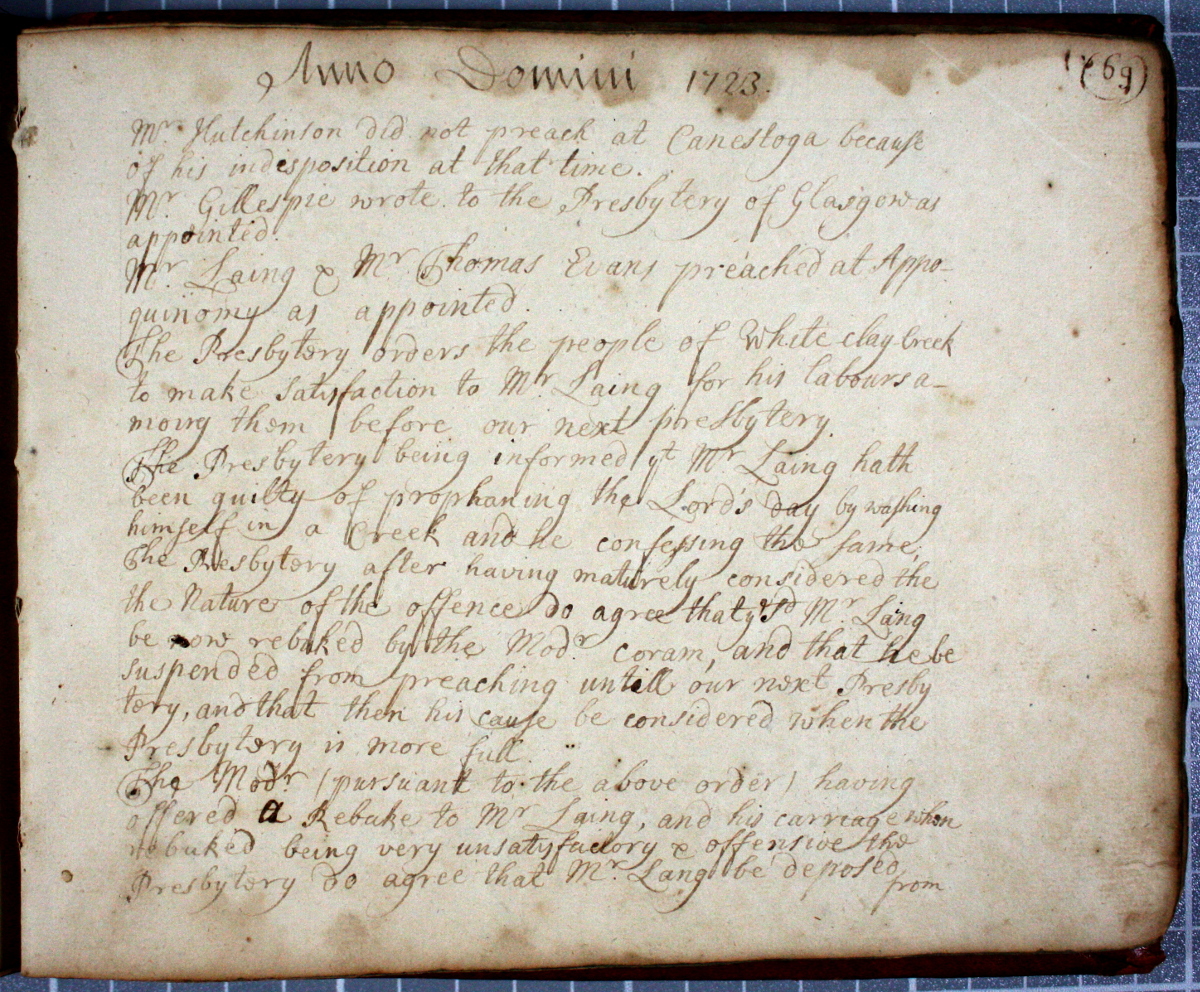 For all that some of these activities sound alien, what strikes me about Presbyterian history here is that the present is continuous with the past--we haven't made some great rupture with it. The body of people that governed its ordered ministry by refusing membership to men trained in Log College is also the body that denied ordination and marriage to out gays and lesbians. The body that replied coldly to abolitionist appeals from the red-hot Presbytery of Chillicothe in the 1840s is the same body that now carefully deliberates on the necessity of abolishing prisons in the 2020s.

Thanks to the faithful labor of former General Assembly co-moderator Cindy Kohlmann, you can watch the whole presentation here.

The next day, I was off across Maryland and Pennsylvania, bound for Pittsburgh. My first stop was the Pittsburgh Presbytery offices on the north shore of the Allegheny, where I helped prep some records of the Presbytery and some of its historic churches for shipment to PHS, including this hand-retouched photo from St. Andrew's United Presbyterian Church (Sewickley, Pa.). 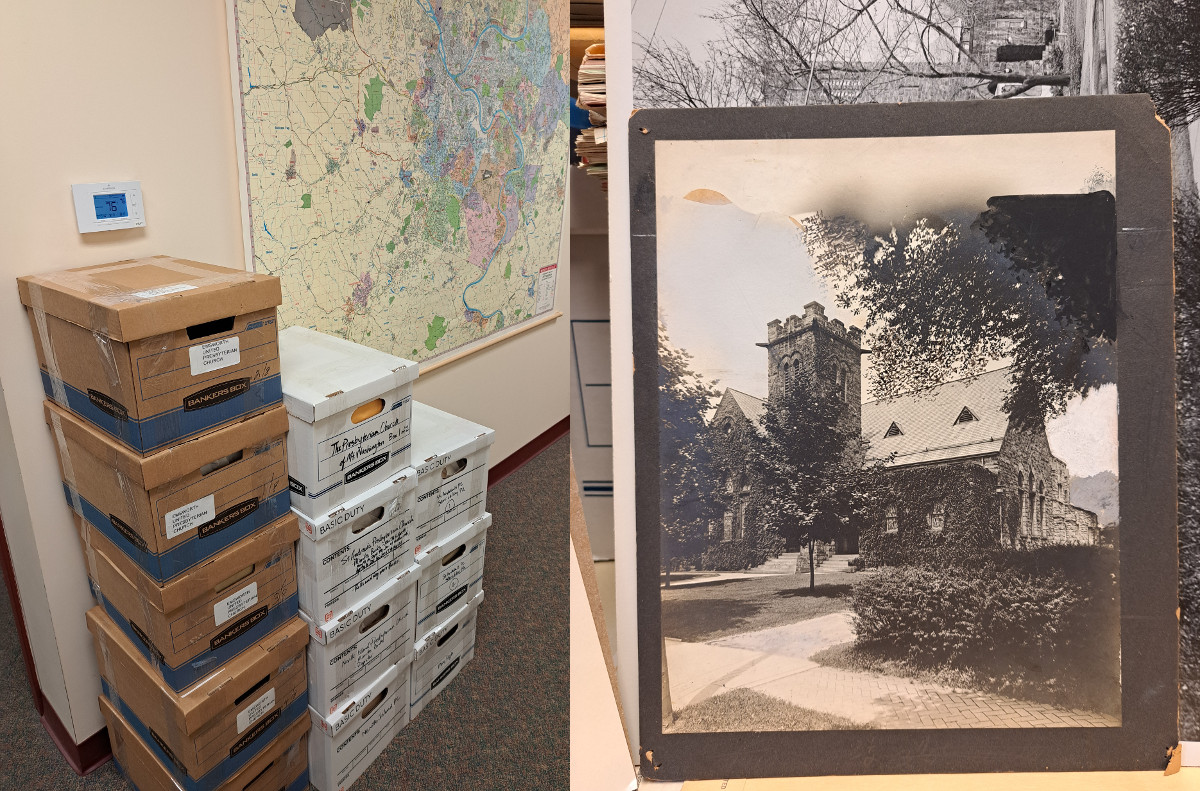 On September 22, I joined the presbytery meeting at Crestfield Camp and Conference Center in Slippery Rock. I was on the docket for eight minutes or so, delivering news about the Katie Geneva Cannon digital archive and other recent projects. I told the 100 attendees that even if they didn't already know it, our work is done in common--more than half the attendees raised their hands when asked if they were stewards of original primary source documents. 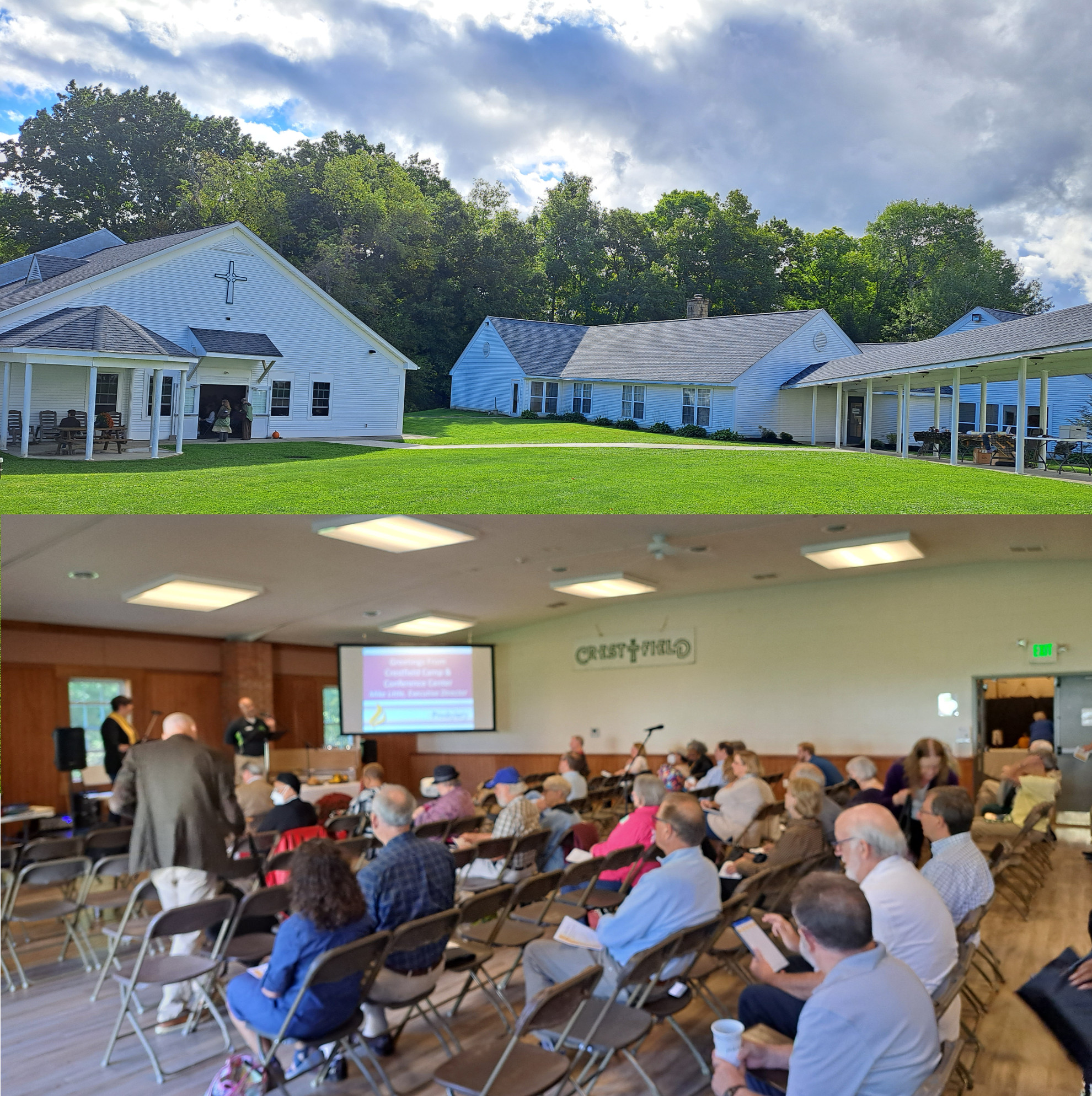 Finally, on Friday I visited Eastminster Presbyterian Church in Pittsburgh, to prep more records for shipping to PHS. Carefully selected by their archivist, Perry Recker, Eastminster's records cover multiple predecessor churches. Talking with Perry and other folks, I learned a lot about the social geography of the Pittsburgh churches--from the titanic cathedrals like East Liberty, built with Mellon family money, jokingly referred to as his "Mellon's fire escape," to the still large churches like Eastminster, built for the middle management class of firms like Alcoa, Westinghouse, and Pittsburgh Paint.

Rounding out the visit, I met Alfreda Richardson, who passed along the personal records of Kermit Overton. Overton was a Presbyterian minister, a Marine, an urban-industrial chaplain to migrant communities in Newark and to workers in Port Harcourt, Nigeria, and an avid photographer, as seen here in action at a General Assembly in the 1980s. 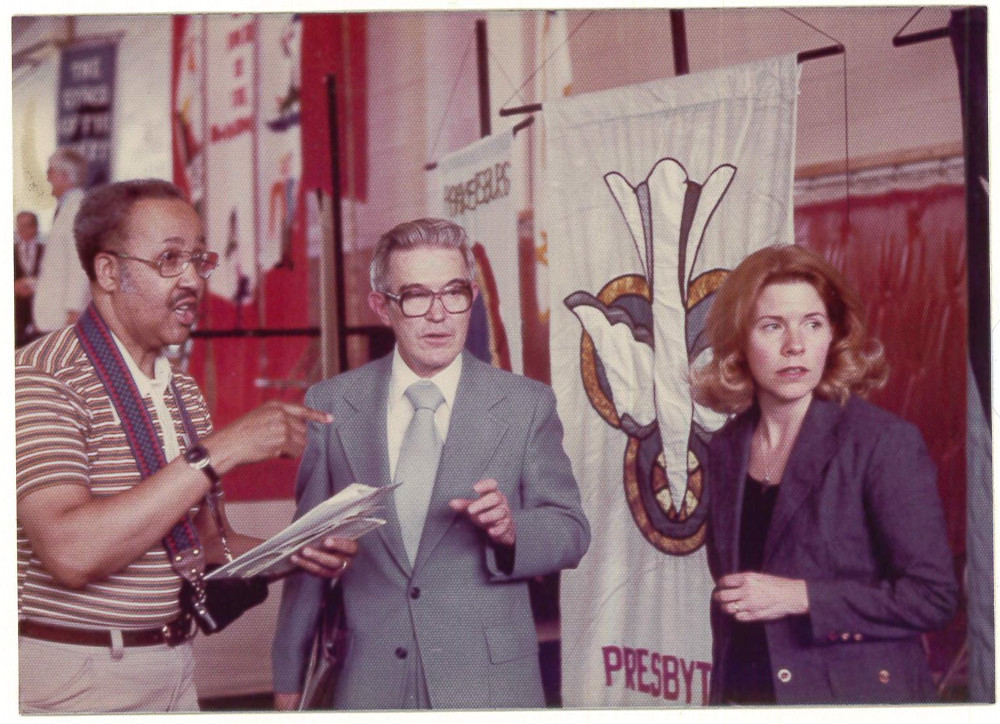 PHS is really pleased to have been able to serve our constituents in two historic hotbeds of the Presbyterian tradition, and we look forward to seeing more of you!