Marianne Moore: Of Gardens and Toads 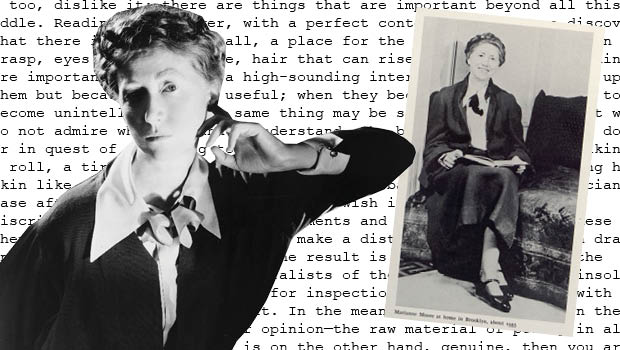 Image on right: Portrait of Moore, frontispiece from Marianne Moore: The Poet’s Advance. Title of photo, “Marianne Moore at home in Brooklyn, about 1935.”

An American modernist poet and life-long Presbyterian, Marianne Moore (1887-1972) was considered by many critics to be the nation’s greatest living poet in the mid-twentieth century. Moore's most famous poem is perhaps the one entitled Poetry, in which she hopes for poets who can produce "imaginary gardens with real toads in them." Poetry begins with the following stanza:

“I too, dislike it: there are things that are important beyond all this fiddle. Reading it, however, with a perfect contempt for it, one discovers that there is in it after all, a place for the genuine.”

Born in Kirkwood, Missouri, in 1887, Moore was raised in the manse of the First Presbyterian Church in Kirkwood, Missouri, where her maternal grandfather, Rev. Dr. John R. Warner (1827-1894), served as pastor from 1870 to 1894. Following her grandfather’s death, Moore and her mother and brother moved to Carlisle, Pennsylvania, where she graduated from high school. The family attended the Second Presbyterian Church in Carlisle. Her brother, Rev. John Warner Moore, became a Navy chaplain. 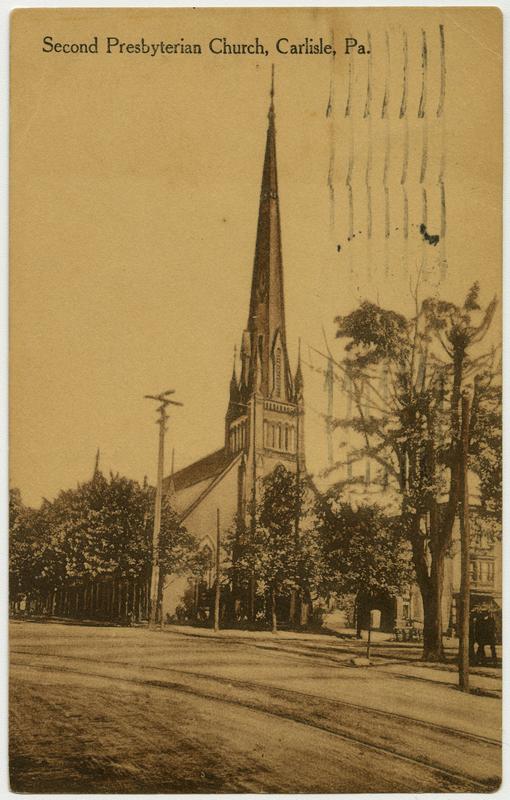 Moore entered Bryn Mawr College in 1905, where she majored in history, economics, and political science, earning her bachelor’s degree in 1909. At Bryn Mawr, Moore started writing short stories and poems for the campus literary magazine and decided to become a writer. She also became involved in the movement for women’s suffrage. Moore and her mother were members of the “Woman Suffrage Party of Pennsylvania.” There is speculation that Moore participated in the women's suffrage parade of 1913 in Washington, D.C., held the day before Woodrow Wilson 's presidential inauguration.

After graduation, she taught business subjects at the Carlisle Indian Industrial School from 1911 to 1914 while working to establish herself as a poet and writer. Founded in 1879 by Lieutenant Richard Henry Pratt, the Carlisle Indian Industrial School was one of the early federally funded off-reservation Indian boarding schools run by the Department of Interior, Bureau of Indian Affairs. The end goal of the American Indian boarding school system was forced cultural assimilation through practices that included banning Native languages and spiritual practices. Some private boarding schools were sponsored by religious denominations, including the Presbyterian church.

From 1879 until 1918, more than 10,000 Native American children from 140 tribes attended Carlisle. The policies of the United States government and practices of Carlisle and similar schools have since been roundly condemned, but the harm inflicted by these schools on Native American communities is ongoing and has yet to be fully reconciled. Find out how the legacy and struggle of Carlisle Indian Industrial School students is being honored through the Carlisle Indian School Project. 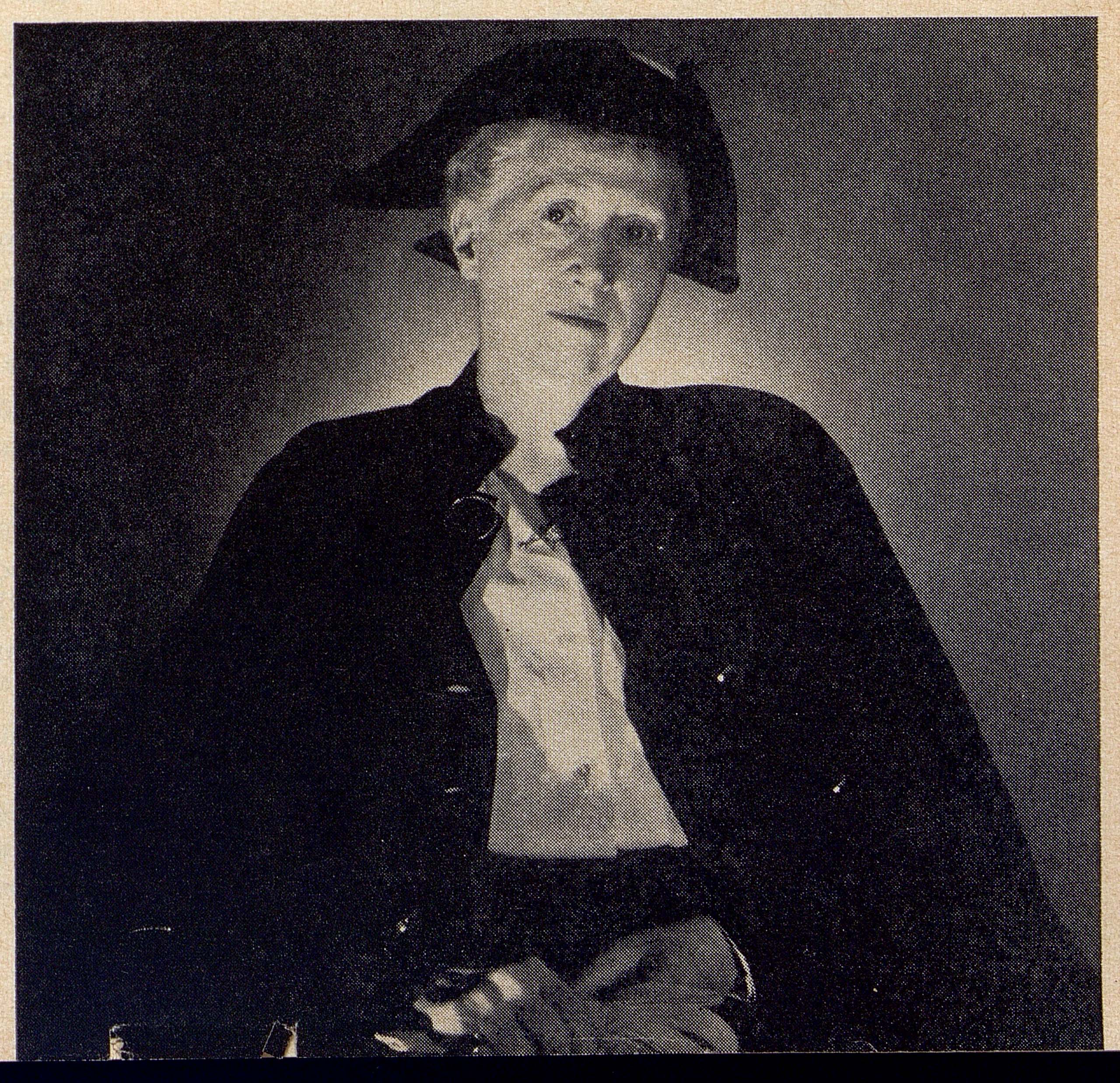 Picture of Moore from Presbyterian Life in which she wears her signature outfit.

In addition to poetry, Moore wrote a significant number of prose pieces, including reviews and essays. She was an avid baseball fan and wrote the liner notes for Muhammed Ali’s record, I Am the Greatest! The Marianne Moore Collection is housed at The Rosenbach in Philadelphia. The webpage for her collection includes a wonderful image of her attending a baseball game. Moore was highly regarded as a poet during her lifetime and even became somewhat of a celebrity, famous for her tricorn hat and cape.

Moore is featured in a Presbyterian Life article titled, “Who is a Presbyterian Woman?” wearing her signature outfit. The article, which appears in the June 15, 1958, issue, states that Moore has observed that her writing springs from “an instinctive wish to share what has done me good to look at or to know. It is an expression of gratitude.”

Moore’s Collected Poems (1951) won both the Pulitzer Prize in poetry and the National Book Award, and in 1953 she was awarded the Bollingen Prize. 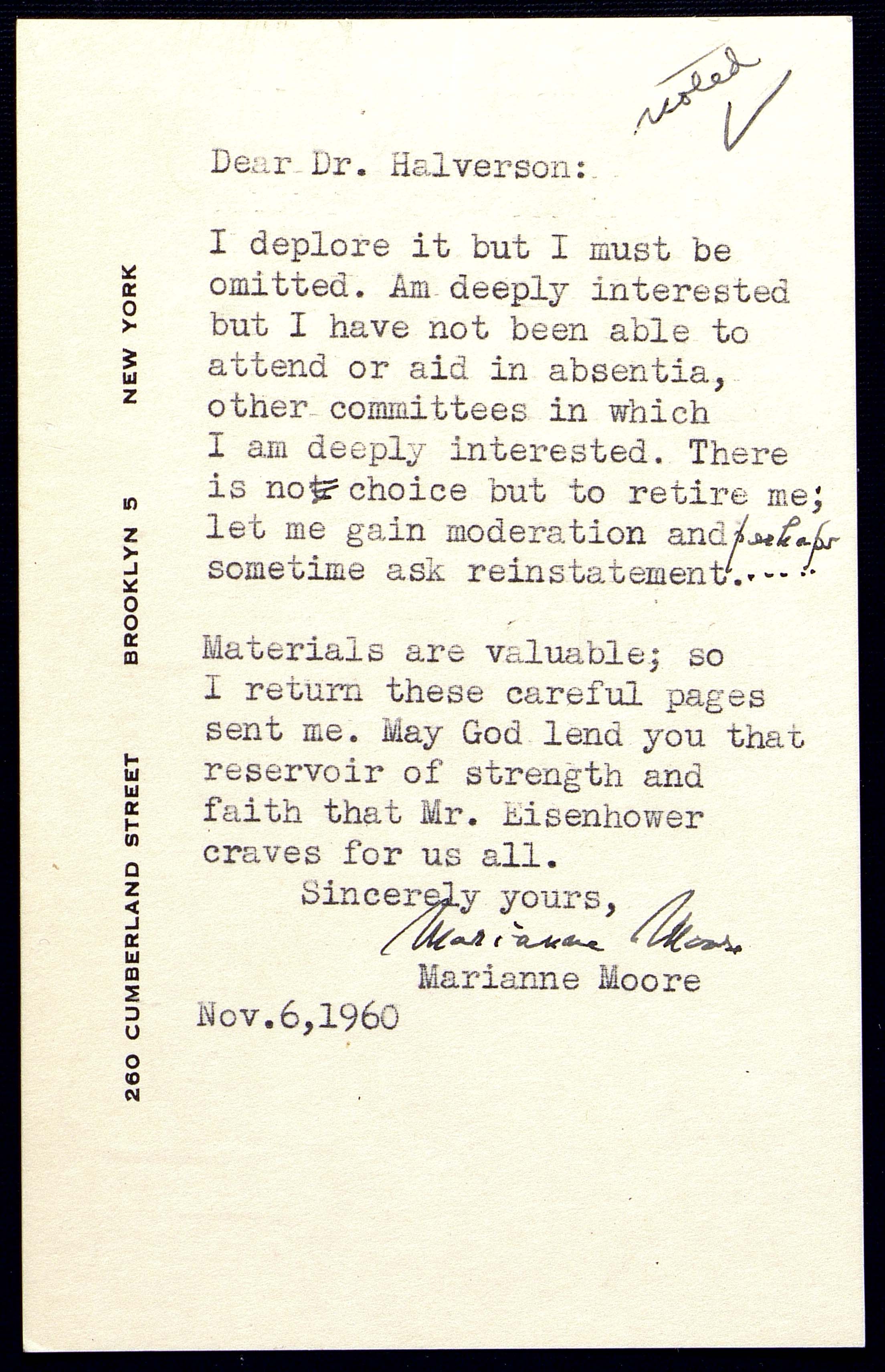 Moore was asked to serve on a literature committee of the National Council of the Churches of Christ by Marvin Halverson, who was the executive director of the Department of Worship and the Arts in the Division of Christian Life and Mission. The Department sought the involvement of prominent cultural leaders in its work. We hold a postcard in our collections with Moore’s regrets at not being able to participate in the committee work.

In 1935, Moore and her mother joined the Lafayette Avenue Presbyterian Church in Brooklyn, New York, where she remained a member until her death on February 5, 1972.