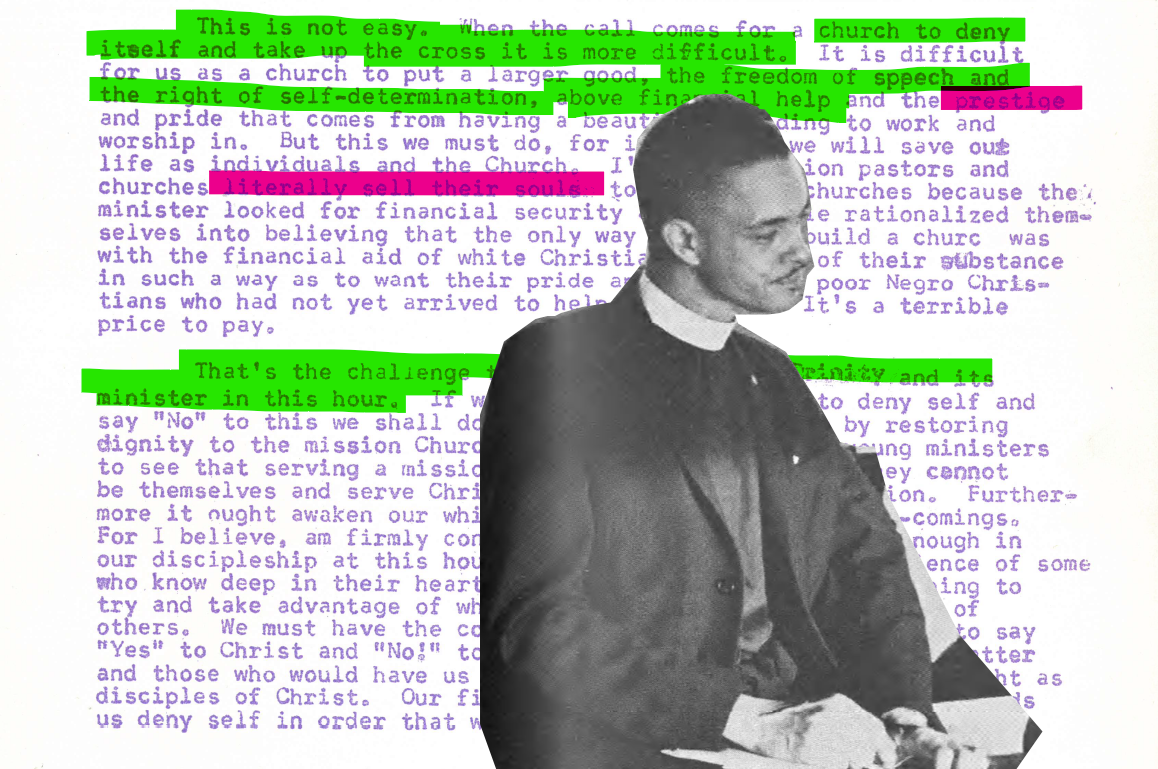 In November of 1956 the young pastor Joseph Metz Rollins delivered a sermon called "Faithful to Christ's Command." The Southern church (the PCUS denomination) that paid most of his salary had moved to rescind support, calling his congregation "nothing but a headquarters for integration." Metz, already working nights as a hospital orderly, was threatened with poverty. He asked his church to take up the cross with him.

His sermon would be reprinted in the Catawba Synod Argus, in sections, and later as an appendix in All-Black Governing Bodies. The third section was never reprinted. It turns out to be contained in full in records of the PCUS Department of Negro Work, held at PHS.

In 1952 Alex Batchelor of the PCUS Board of Church Extension met the Negro Work Committee of First Presbyterian Church, Tallahassee, Florida, and promised a grant from the Board to the church to seed a Black church. A committee drawn from local white churches would take responsibility for fundraising thereafter. The Tallahassee committee raised funds in 1953 and 1954 and organized Trinity Presbyterian Church, with 32 members, chiefly as a community church and student center for Florida A&M. The church called Metz Rollins, child of Carver Memorial Presbyterian Church (Newport News, Va.), ordained by the PCUSA Presbytery of Southern Virginia, as its minister. By 1955 Trinity still held worship in Metz's living room.

In 1955 the Negro Work Committee (NWC) of the Tallahassee Area Churches set a budget for Trinity of $3,228 and began work with a local Presbyterian architect, who drew plans for a $40,000 to $50,000 church building. 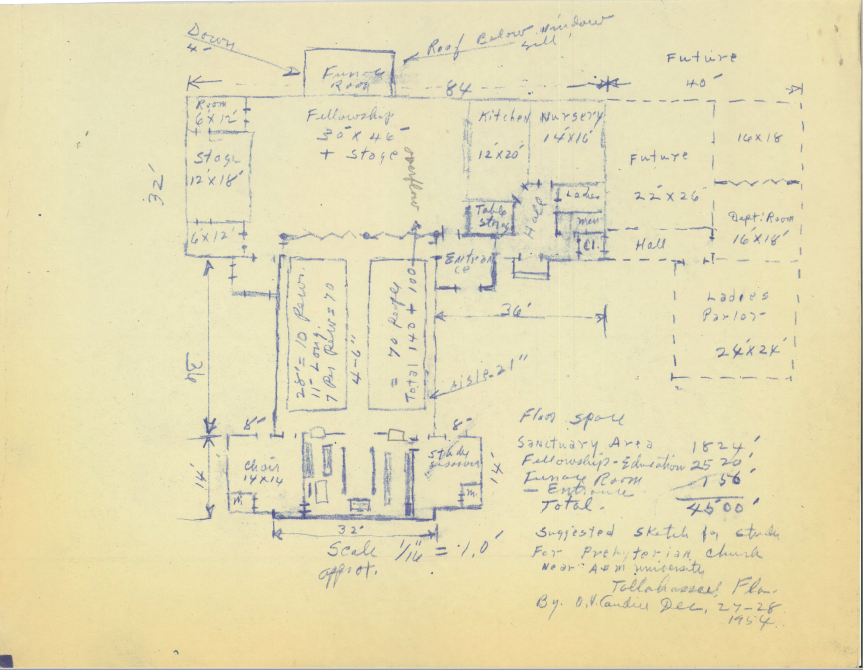 Ministers in the PCUS Presbytery of Florida were enthusiastic about the idea of church growth, so long as that growth adhered to segregation. Dr. Donald Swicord was a PCUS missionary to Korea who had been advocating for church plants in Tallahassee, by his estimation, from 1945 onward. He writes to Angus Laird of the NWC in June 1955, "one Negro College Campus Presbyterian Church could by no means meet the needs of the Negro population of Tallahassee. I repeat we need other Negro Presbyterian churches in Tallahassee if we are to attempt to reach the unchurched Negroes of the area."

Laird replies with a summary of the Southern church's so-called Negro work that is rich with euphemism and myth-making:

"It is my understanding that for a long time after the War Between the States we did not have separate white and Negro churches. The Negro members, however, preferred their own churches, and finally, about 1876, permission was given by our General Assembly to establish separate Negro churches; however, we insisted upon our usual high educational standards for the Negro ministry and we did not have ministers meeting our standards."

Military Reconstruction indeed mandated integration in civil society, and Black attendance at white churches was the norm both before and after the Civil War. The authors of All-Black Governing Bodies, pace Laird, write that there were not separate Black Presbyterian churches in the South prior to 1876, with one exception, Zion Presbyterian Church in Charleston, S.C. Far from simply "preferring their own churches," it was the PCUS refusal to ordain African Americans to the ministry of word and sacrament, and the revanche of racism post-Reconstruction that drove Black Southern Presbyterians into the new churches being started by the PCUSA: "Southerners expected Blacks to return to their former relationship and be prepared to submit to a status of inferiority in order to worship with their former masters." Segregation would be official practice in the PCUS until the General Assembly amended its Directory For The Worship And Work Of The Church in 1964.

Until June 1956, all that stood in the way of Tallahassee Presbyterians supporting Trinity were minor adjustments to the building specifications. At the end of June, Angus Laird writes PCUS staff in Atlanta practically sputtering. He complains about the slow growth of Trinity and its failure to be self-sustaining, encloses a newspaper article, and closes this way: "It would be difficult enough to raise the money without the development of the situation referred to in the news story [image below], and it would be impossible to do anything now." 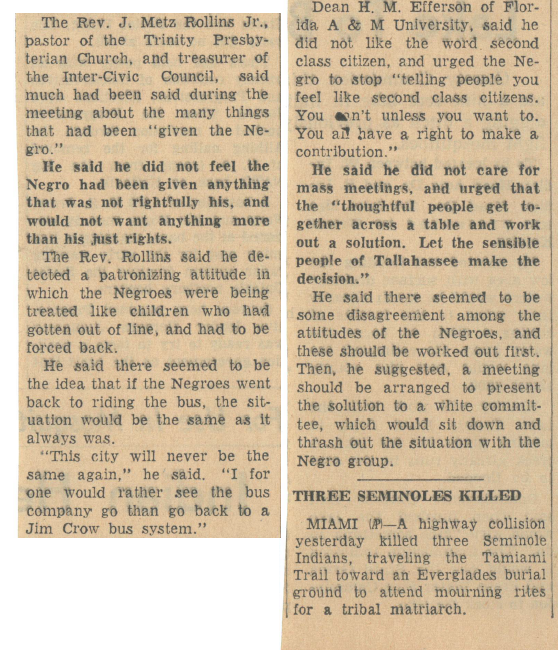 Excerpt from the 26 June 1956 Tallahassee Democrat.

Laird was referring to the beginning of Tallahassee's bus boycott. In May of 1956 two A&M students boarded a bus in the whites-only section and refused to move. They were arrested, charged with inciting a riot, and released. That night a cross was burned in their front yard. This escalation of violence led Black Tallahasseans to form the Inter-Civic Council on May 29th. Metz Rollins was its treasurer.

After a month long boycott, the owner of the city bus company moved to end bus service altogether. A June 26th "inter-racial conference" met to try to avert this outcome -- white Tallahasseans were as dependent on the bus lines running as Black Tallahasseans were. The boycotters were opposed, not just by white extremists and white moderates, but by senior administrators at the historically Black college, including H. M. Efferson who scolded the boycotters for calling themselves "second-class citizens."

[They asked] 'What is it you people want?' and I said, 'I want the same damn thing that you all have.'

Rollins, for his part, denounced both the "patronizing attitude in which the Negroes were being treated like children who had gotten out of line, and had to be forced back," and the moderate desire to return to the status quo ante. "This city will never be the same again," he said. "I for one would rather see the bus company go than go back to a Jim Crow bus system."

In July, Angus Laird began to check in on Trinity's finances, insinuating that Rollins had failed to carefully steward church funds. Ernest Fears, writing on behalf of church leadership, furnished a financial report and a vote of confidence in his minister: "There may be need for some change in the over-all leadership of the total organization here, but certainly not in the leadership of Trinity Presbyterian Church proper. I feel that the above church has explicit faith in its present leadership and in no wise anticipates a change." 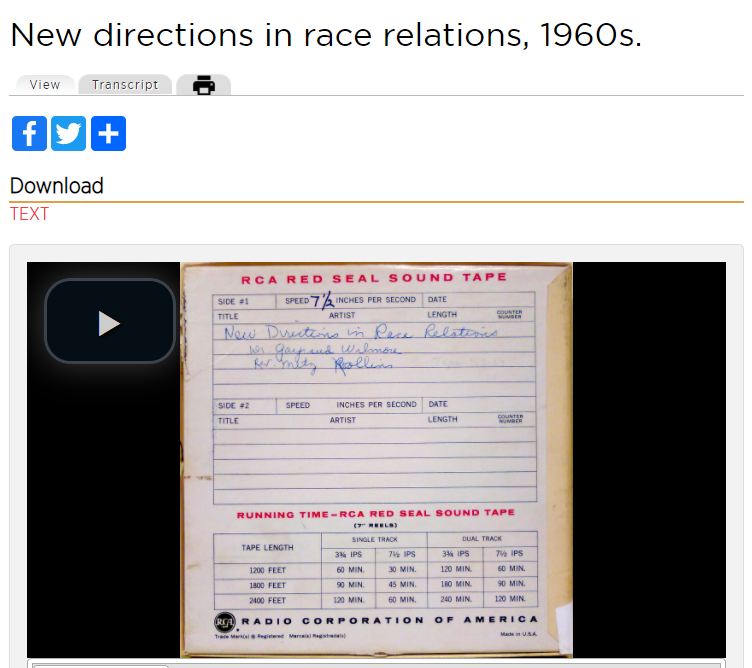 Correspondence between First Tallahassee and PCUS offices in Atlanta does reveal some sympathy for Trinity. Davis Thomas writes in October that Trinity's people impressed him as "a determined group of people, intent on having a Church, and standing solidly behind their pastor." Thomas relates that Trinity simply cannot endure "sponsorship by a group which wants to dominate the Church. Sponsorship to them means guidance, instruction, co-operation, and help. Unfortunately, sponsorship seems to mean some degree of actual control to some of the white members of our area committee and, particularly, to the Home Mission Committee of our Presbytery."

The Home Mission Committee of Florida Presbytery had, as a protest against his organizing, cut off their salary support for Rollins. Thomas takes Trinity's and Rollins's case before the committee, which said again that they "would not be interested in supporting the Church so long as Metz Rollins was a member of the NAACP." 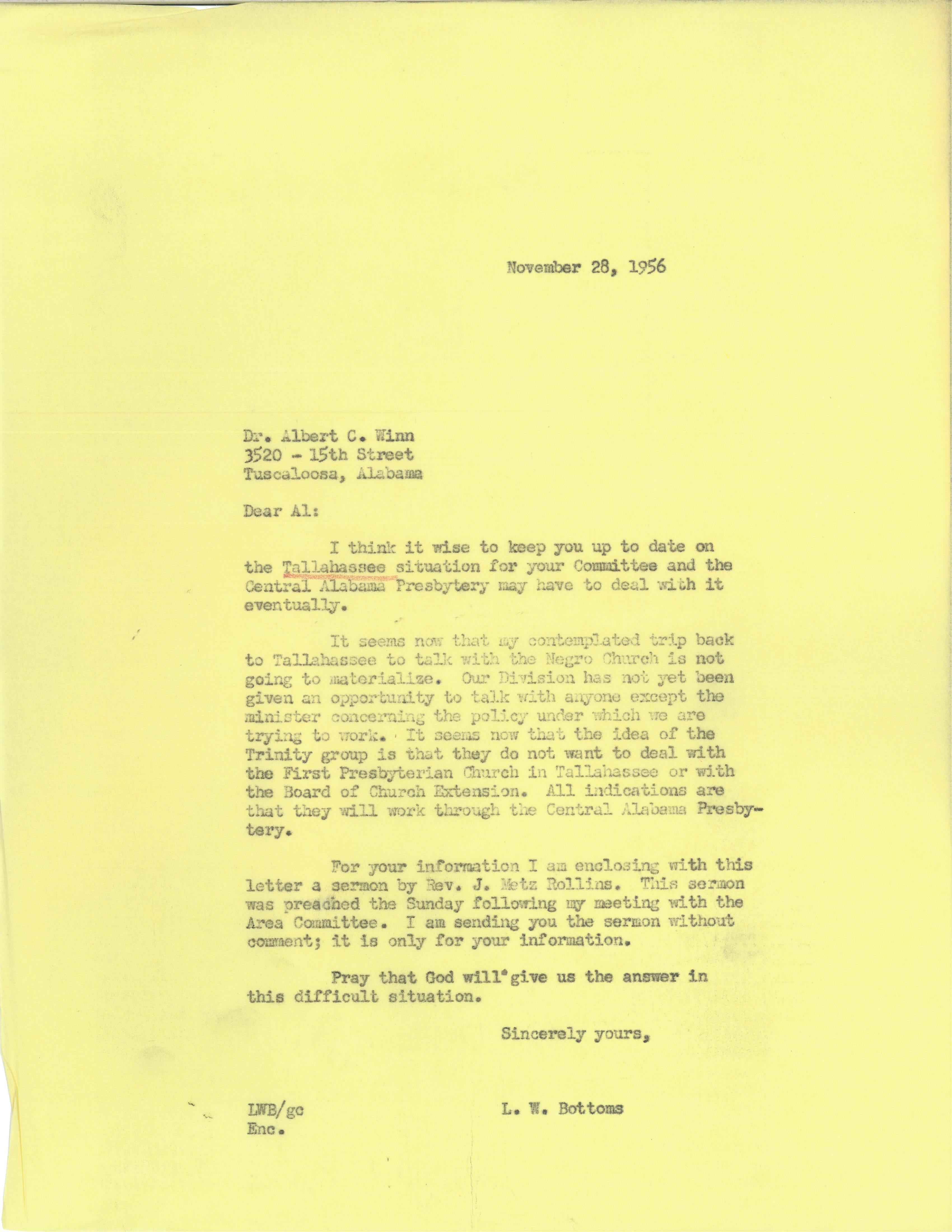 Lawrence Bottoms, future moderator of the PCUS General Assembly, then staff of the Board of Church Extension, was dispatched to Tallahassee in November to try to heal the rift. Trinity leadership refused to meet with him: "It seems now that the idea of the Trinity group is that they do not want to deal with the First Presbyterian Church in Tallahassee or with the Board of Church Extension. All indications are that they will work through the Central Alabama Presbytery."

Further pacification efforts were taken up in February 1957 by Albert Winn of the Presbytery of Central Alabama, who advised Trinity to re-establish contact with Atlanta, try to mend relations with First Tallahassee, and "get in line with [Florida] Presbytery as soon as possible." By the same token, Winn advised the angrier members of First Tallahassee that their calls for discipline against Rollins were moot: "In discussing the difficulties which they felt had been introduced into the situation by Mr. Rollins' participation in the bus protest, a clear understanding was reached that Mr. Rollins is a member of the Central Alabama Presbytery and is answerable to that body for any questions which might be raised concerning his conduct as a minister. We felt that this was an important principle to be established; that he has the same rights to his convictions as any other Presbyterian minister."

By May 1957, seeing no evident way forward, Trinity moved to dissolve its relationship with the PCUS and move to join the PCUSA. Lawrence Bottoms, for his part, was actively assuaging the white church. During a meeting with Don Swicord and Davis Thomas to reflect on the situation at Trinity and think of paths forward, Bottoms is reported to have said that in the future Black ministers should "be received into white presbyteries rather than for them to hold their membership in a negro presbytery," the kind of arrangement that would guarantee white domination of dissident ministers like Metz. 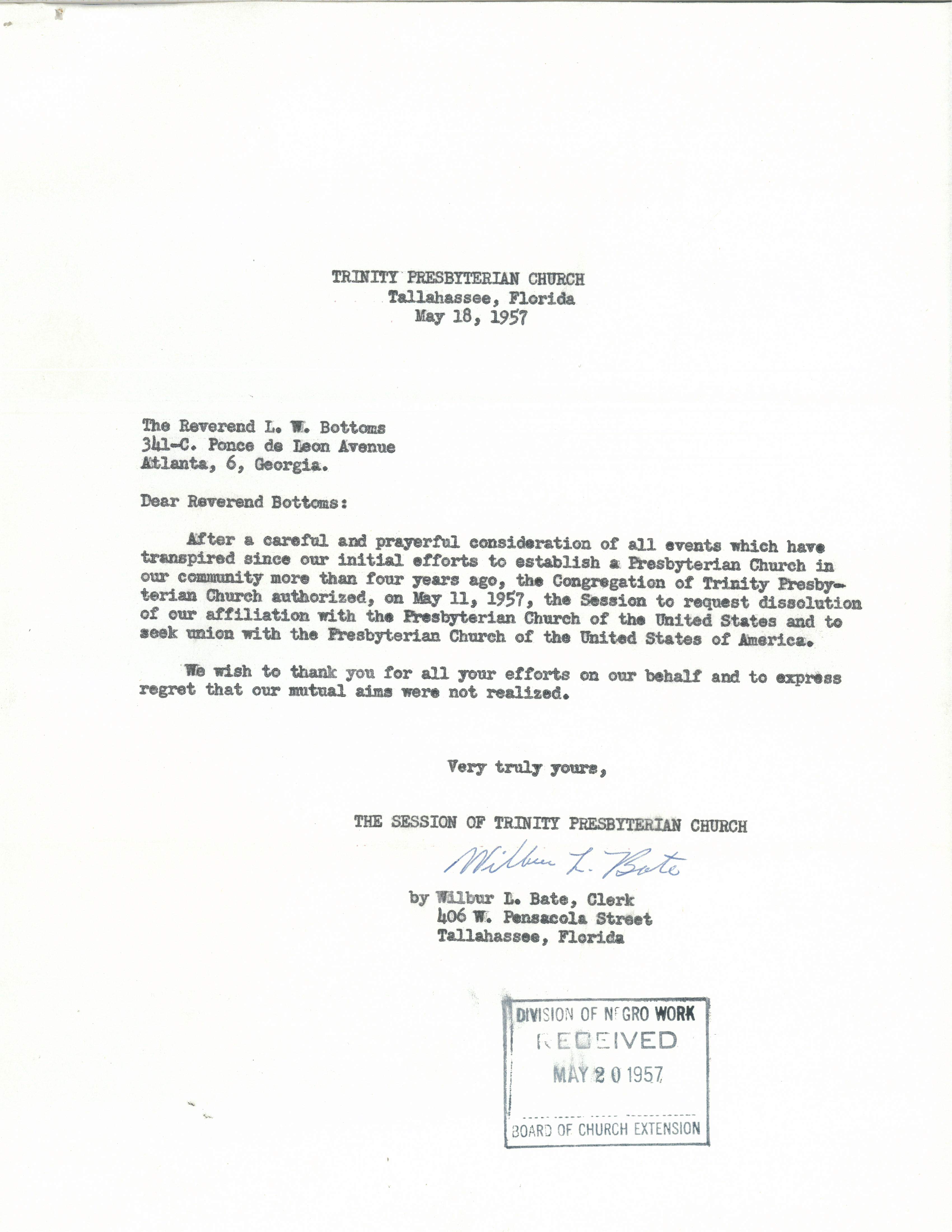 At the same meeting, Bottoms related that the "policy of the Board of Church Extension was "to consider desegregation not essential." Presbyterian evangelization of African Americans would proceed within segregated society.

First Tallahassee would make some final donations to the Department of Negro Work, the PCUS would pay First Tallahassee back what it spent to hire the architect for Trinity, and the issue would no longer take up the energy of the ecclesial bureaucracy. 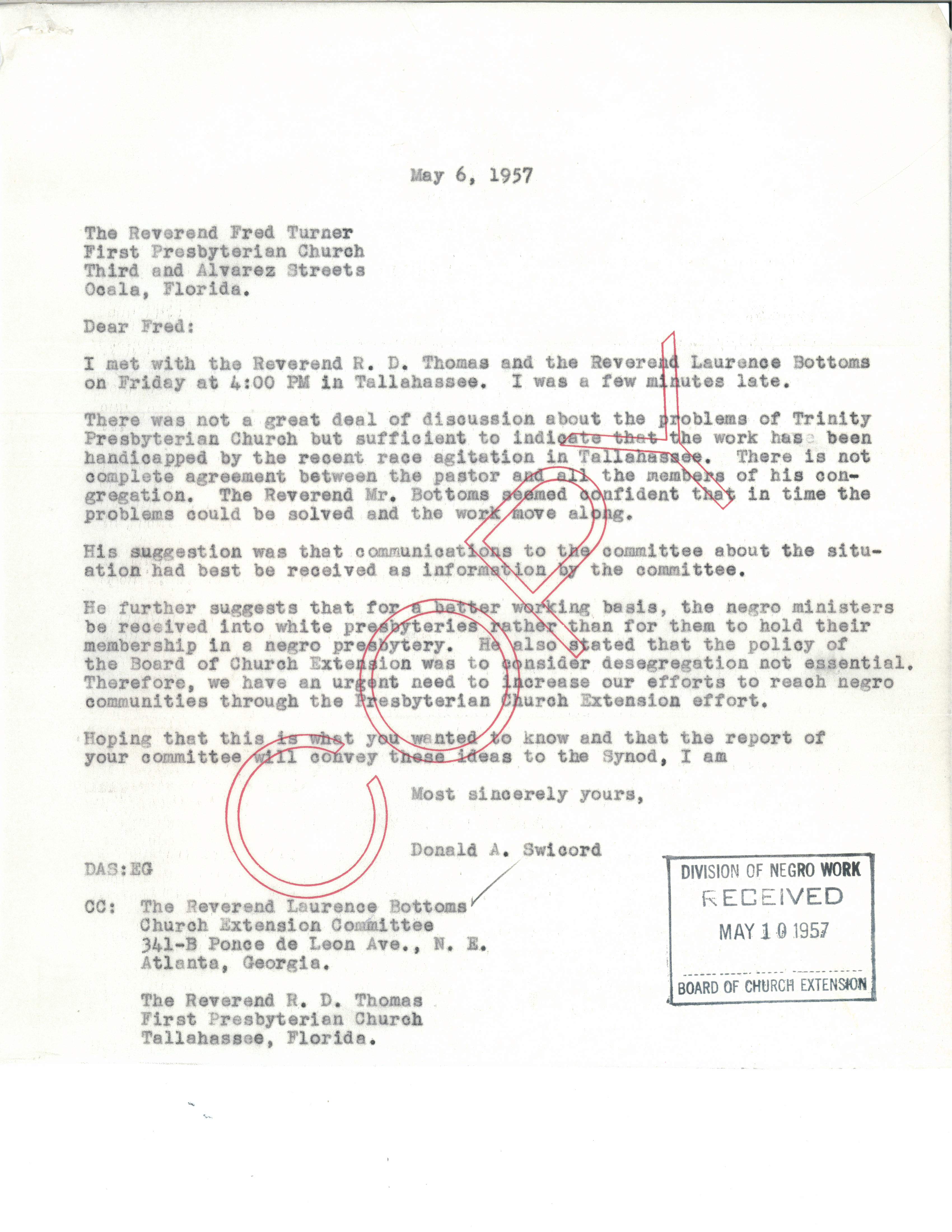 Rollins would be called by the UPCUSA in 1958 to serve a biracial church in Nashville -- later he would say "the salary was six thousand dollars and I thought I was in glory." He would go on to organize the National Committee of Black Churchmen in New York and finally to serve St. Augustine Presbyterian Church in the Bronx. In 25 years at St. Augustine, Rollins would be involved in opposition to the American War in Vietnam, advocate for prisoners in Attica, and run for the school board in White Plains. In a 2007 HistoryMakers interview, he sounds the same themes in White Plains as animated him in Tallahassee:

"You know, they interviewed me and they said, you know, again, the inevitable question, 'What is it you people want?' and I said, 'I want the same damn thing that you all have.'"

Metz was honorably retired by the Presbytery of New York City in 2005. He died in 2009.