That All May Freely Serve: Abolishing the "Other" 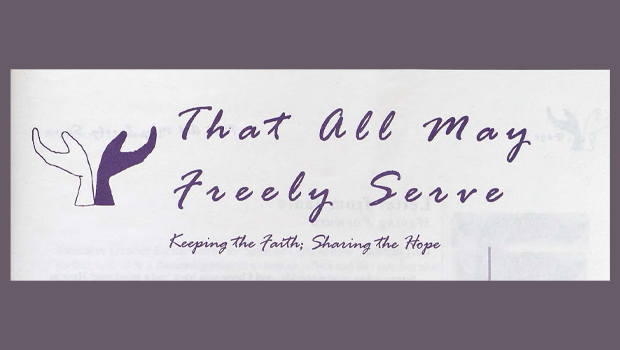 As October, LGBTQ+ history month whizzes by, discussing the relationship between members of the LGBTQIA+ community and the Presbyterian church is imperative. Though the road has been rocky, there are significant organizations within the church who have fought for LGBTQIA+ rights. An amazing example of one of these organizations was That All May Freely Serve (TAMFS). This organization founded in 1992, advocated for an inclusive and welcoming Church and for lesbian, gay, bisexual, and transgender candidates in the Presbyterian Church (USA) to pursue and achieve their ordination. The organization described their mission to "resist and transform structures and systems of injustice by being present and engaged--pastorally and as advocates--during these times of transition in the Presbyterian Church (USA).”

Within the queer community, there’s an air of exclusion and tension from organized religion. There’s a significant amount of legislature and “social rules” against queer people that can be traced back to organized religion. This unfortunately, has created a distinct but unspoken exclusion and othering of the LGBTQIA+ community. Therefore, as one can see in recent news, this has contributed to incredible violence and discrimination against queer people. 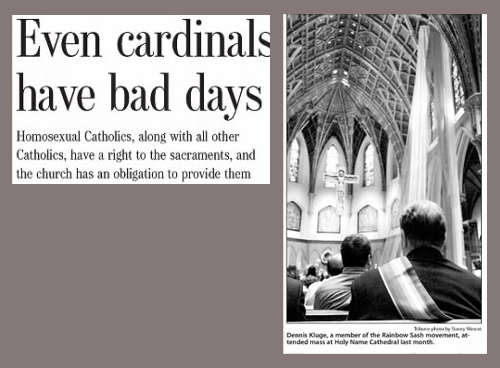 "Even cardinals have bad days," Eugene Cullen Kennedy, from the Chicago Tribune, June 13, 2004. Click here to read the full article.

Othering is a term used within the LGBTQIA+ community that references the exclusion of queer people from discussions, education, history, and religious circles. Othering is extremely detrimental to the culture of the organization or group it occurs in. For example, in their September 2004 newsletter, the Chicago chapter of TAMFS (TAMFS-C) responded to an article in the Chicago Tribune reporting on an egregious case of othering. TAMFS stepped in when a young man was denied communion at Holy Name Cathedral because he was wearing a rainbow sash. The article, "Even cardinals have bad days," discussed that “Cardinal Francis George convinced the priests at Holy Name Cathedral to deny the Eucharist…to homosexuals wearing rainbow sashes.” (Kennedy) The Cardinal considered it a protection of the sanctity of Eucharist. However, this ensured discrimination towards the gay patrons at Holy Name Cathedral.

TAMFS’ response was described in their notice, “When a Ribbon is More than a Ribbon,” which tells of TAMFS-Chicago's organized production and distribution of the same rainbow ribbons in support of the young man. Queer people and allies wore them to their graduation as an act of rebellion against Holy Name Cathedral. This shows the power of Presbyterians protecting one another regardless of sexual orientation or gender identity. Allies gathered in support of this young man; wearing the rainbow ribbons distributed by TAMFS-C, they created a herd protection. The church couldn’t deny them all. These rainbow ribbons represented tolerance, family, and protection. It’s incredible to think that such a small gesture would cause such huge change. And that’s exactly what the TAMFS-C was hoping for. To make a statement that if you mess with one of us you mess with all of us. 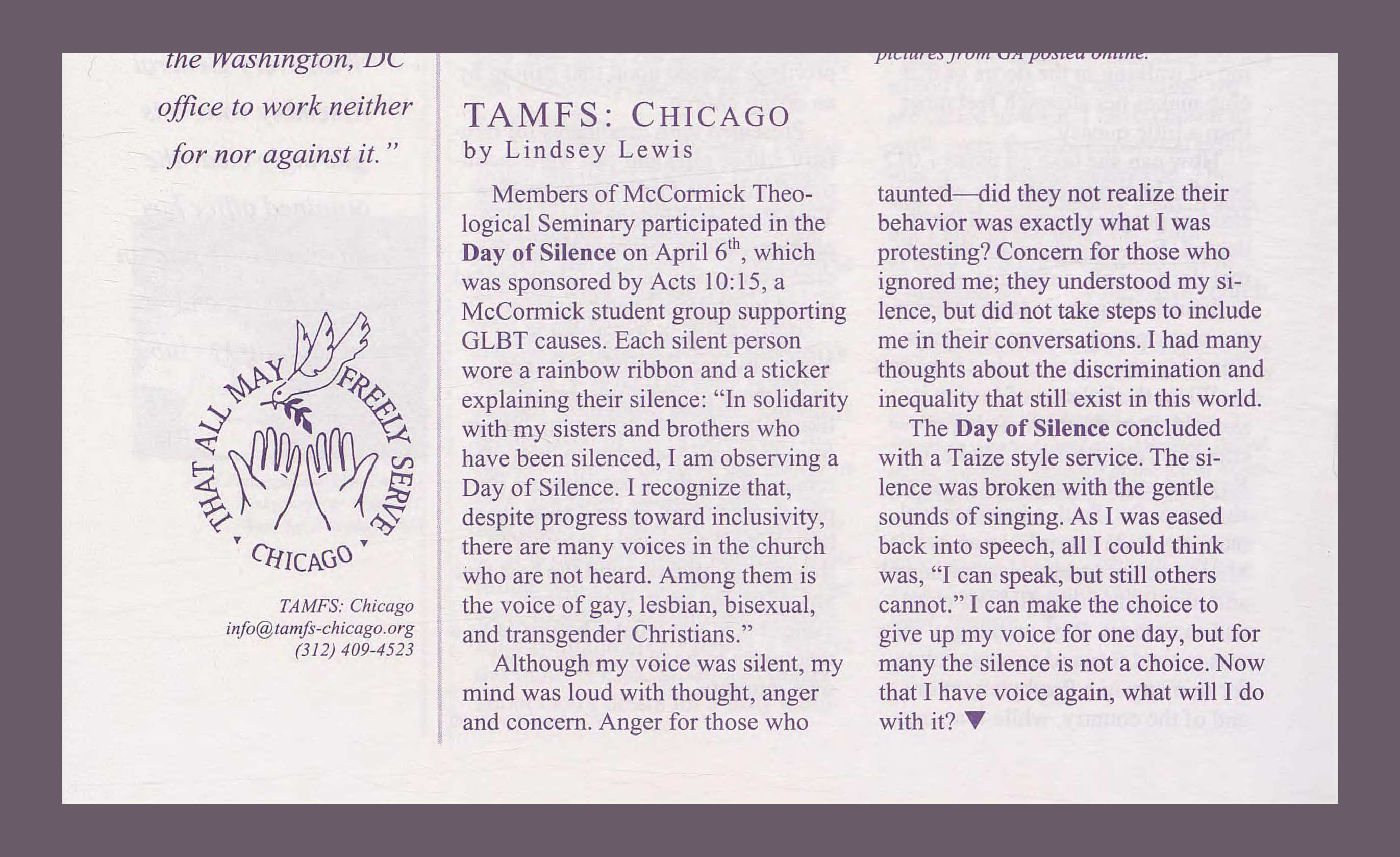 McCormick Theological Seminary students showed support for LGBTQIA+ students during a day of silence. From That All May Freely Serve newsletter, September 2004.

This is a perfect example of allyship and integration of chosen families into the TAMFS ministry. An ally is an individual that supports, encourages, and protects queer people. A chosen family is a term used in the queer community to describe the connections between fellow LGBTQIA+ people and their allies. Chosen family is incredibly important to queer people. Often time, a queer person’s family will shun them for their identity. This makes “chosen family” incredibly important and by integrating it into ministry, TAMFS helped change the dynamic between queer people and the church. Jim Rigby, pastor of St. Andrew’s Presbyterian Church in Austin, Texas, explained in a February 1999 newsletter his reasons as to why he, as a heterosexual, cares about LGBTQIA+ people.

“1. Justice is not a gift.
2. ...if I am going to the table and remember that I have a debt of justice to my brother or sister. I am told by Jesus to leave the table and care for that person.
3. Any attack on you is a family matter. I take it very personally … I expect the same from you.
4. To be unique in any way is to be “queer” to someone. I will no longer wear a mask. I will ask for God’s grace and give it to all of God’s children.”

These four bullet points exemplify the concept of chosen family.  By describing his love and respect for queer people, he tells his congregation that regardless of how people identify, they are still human beings. This humanizes queer people which teaches his congregation better than their organized church taught them.

That All May Freely Serve Chicago pamphlet shared after the passage of Amendment-B. Amendment-B, known as the "fidelity-chastity" amendment, was approved and added to the ordination requirements listed in the Book of Order as G-6.0106b. This included a statement intended to bar LGBT Presbyterians from ordination: "Among these standards is the requirement to live either in fidelity within the covenant of marriage between a man and a woman, or chastity in singleness." Read more about in our TImeline of LGBTQIA+ History in the PC(USA).

Janie Saphr showed in her article that they “will share [their] faith stories, speak the truth of [their] lives and invite [their] faith communities to experience lesbian, gay, bisexual, transgender, and heterosexual persons of faith working together.” She wrote this when the American Psychiatric Association affirmed the health of queer people and warned therapists and organizations who administer or encourage gay conversation therapies to cease their practices. Saphr included the essence of chosen family by encouraging her fellow TAMFS members to be tolerant and accept queer people into their lives. To love one another as God instructed.

Consider the importance of accepting, loving, and nurturing queer people and their voices. Othering is a terrible thing that unfortunately occurs every single day in a queer person’s life. Through tolerance and acceptance, we can change a culture and ensure a more inclusive world. Consider the legislature that has been passed recently regarding queer people. This year, a Florida law passed that will force children to have their body parts observed to avoid trans girls and boys from engaging in youth sports. This “others” a child and creates this culture of exclusion within their peers.

That All May Freely Serve presented throughout their work the need for acceptance and equity within organized religion. If we can continue that work, then we can begin to create a new world.

--
Lumen Lugo-Roman is the Pam Byers Memorial Fund Intern. He is an artist who loves literature and compelling storytelling and in 2021 installed an exhibit at PHS as member of the Building Knowledge and Breaking Barriers exhibit team. Visit www.bkbbphilly.com/lumen to view his installation inspired by archival materials held at PHS.