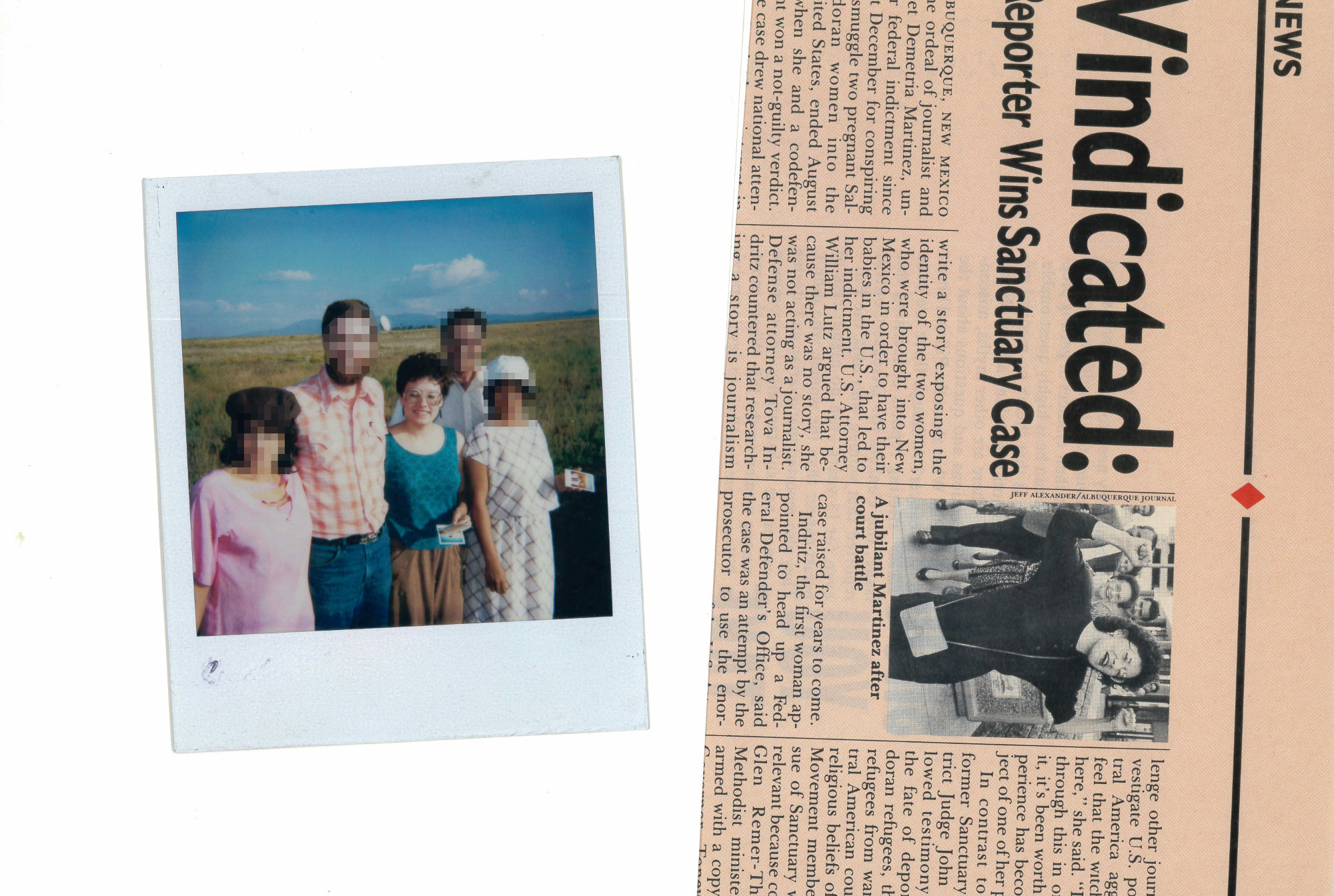 In the 1970s New Life Presbyterian Church was founded in Albuquerque, New Mexico as a church without walls, enabling us to spend more of our resources on service. Another important tenant was pluralism. Those heady first years were full of mission work and respectful discussions. By the '80s we had grown tired of setting up the “tent” each Sunday morning and we had a building constructed. But the desire to be God’s servants in the world was still there. Because we embraced pluralism, each person was empowered to find their own project and encourage others to join them, but the entire church did not get together to decide on one common project.

It was in this atmosphere that some of us discussed the the conflicts in Central America, especially in El Salvador, Guatemala, and Nicaragua. Hundreds of thousands of people were fleeing the horrors of the civil war and the murder and disappearance of friends and families and, in some instances, entire towns. In 1980 President Carter signed the Refugee Act, which was based on the UN Convention that used the standard of a “well founded fear of persecution” as the basis of eligibility for political asylum. In March 1986, Governor Toney Anaya declared New Mexico to be the first Sanctuary State in the nation. I was proud to be a citizen of New Mexico. 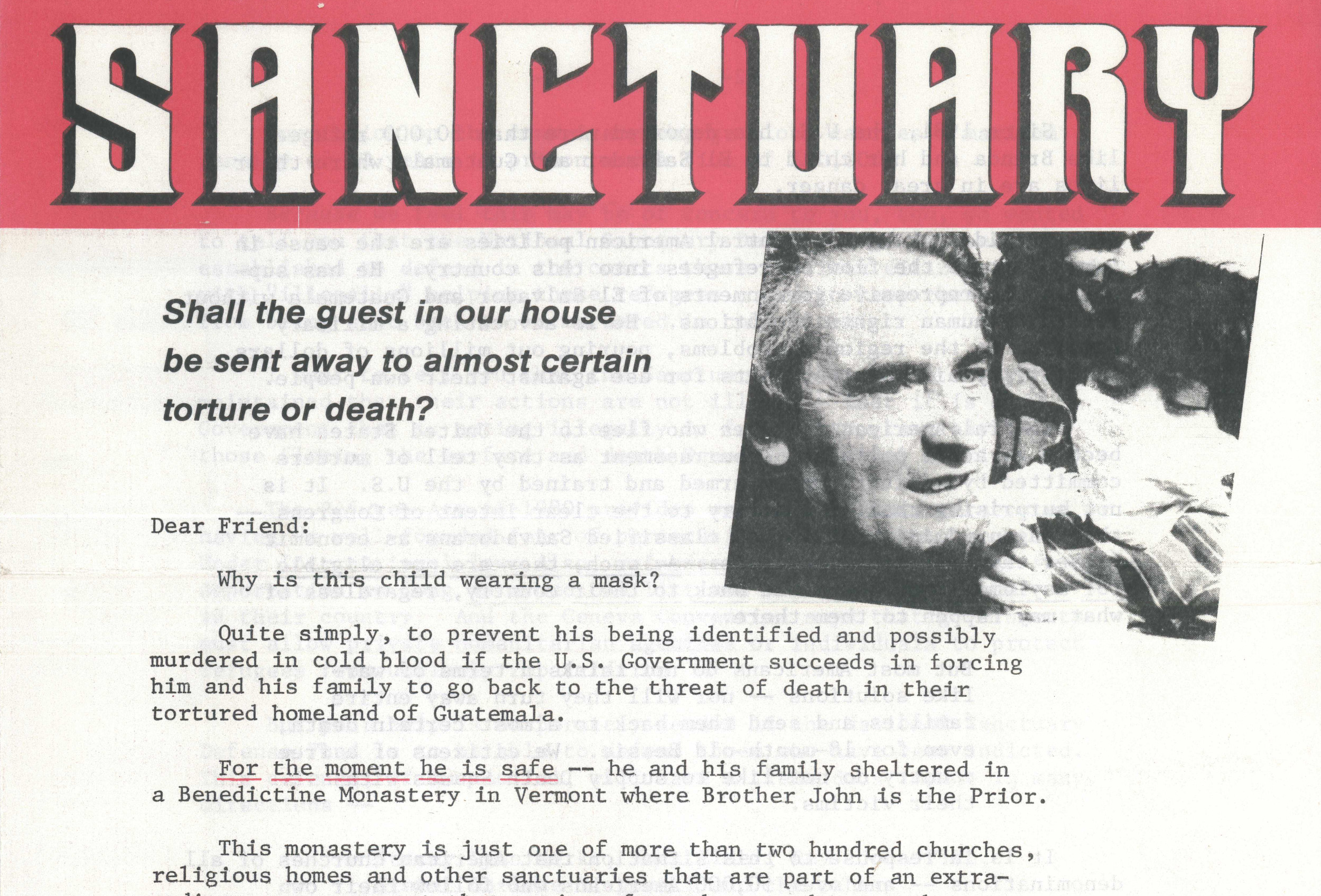 John Fife and his congregation at Tucson’s Southside Presbyterian Church were giving legal and humanitarian aid to refugees from El Salvador and Guatemala. Some of us watched what they were doing with great interest. So, in August of 1986, when "Kaci," the minister of New Life and our friend, called and asked if we would be interested in helping with a sanctuary effort, my then husband, "Arlo" and I agreed. There were two pregnant women who needed a ride from El Paso to Albuquerque. One woman had been raped by Salvadoran soldiers, the other said she was pregnant by a married man. Initially we thought these women were fleeing political danger. We later learned they both wanted to give their babies up for adoption to save them from the conditions found in the Salvadoran orphanages or from being abandoned on the streets in El Salvador.

Glen Remer-Thamert, a Lutheran minister and social worker, knew of these women from a contact he had with a lawyer in El Salvador and was coordinating the American response. Glen, his wife "Enid", Kaci, and his father "Beau" met at our house to plan the trip. They planned to take two vehicles down to El Paso. We agreed to provide my car and Arlo agreed to drive it. I think the other vehicle might have been Glen’s truck. Arlo and Beau would be the primary drivers. They planned a route through the mountains to avoid the immigration check points along the main highways between Las Cruces and Albuquerque. Once in El Paso, Glen would meet the women and Arlo and Beau would wait while he made the connection. After that was accomplished, they would rendezvous and travel together back to Albuquerque.

In addition to Glen, Arlo, and Beau, Demetria Martinez, a freelance reporter for the Albuquerque Journal and the National Catholic Reporter, went along. She thought the plight of these women could be the basis for a Christmas story for one of the papers. It was in her capacity as a reporter that she was going to accompany them on this trip and she made it clear that she was only an observer, not a participant. She did not want to ride in the same car with the women or do anything that could be construed as helping them.

On the following Saturday, the two-car caravan drove south. When they got to El Paso, Glen and the others went to find the women. Arlo waited to hear from them by the pay phone at the designated spot in El Paso. Hours went by. Glen called several times during the day. When he finally called again it was extremely late that night, perhaps about 11 or midnight. He said that the women had not made it across the border and he was going to try again to connect with them in the morning. So, Arlo drove to Las Cruces and spent the night with my parents.

The next morning Glen, Beau, Demetria, and the two women joined Arlo in Las Cruces. Demetria was very unhappy because after Arlo left to spend the night in Las Cruces there was only one vehicle, which meant that after they picked up the women, she had no choice but to ride in the same car with the them. That was not part of the agreement she had worked out with Glen.

In Las Cruces my mother made breakfast for everyone and Beau and Demetria showered. Then they headed north, retracing their path through the mountains. On the way back, one of the women was not feeling well so Arlo used his EMT skills to ensure her wellbeing. Otherwise, the trip continued without any further difficulties and Demetria was able to ride in a different vehicle from the Salvadoran women. 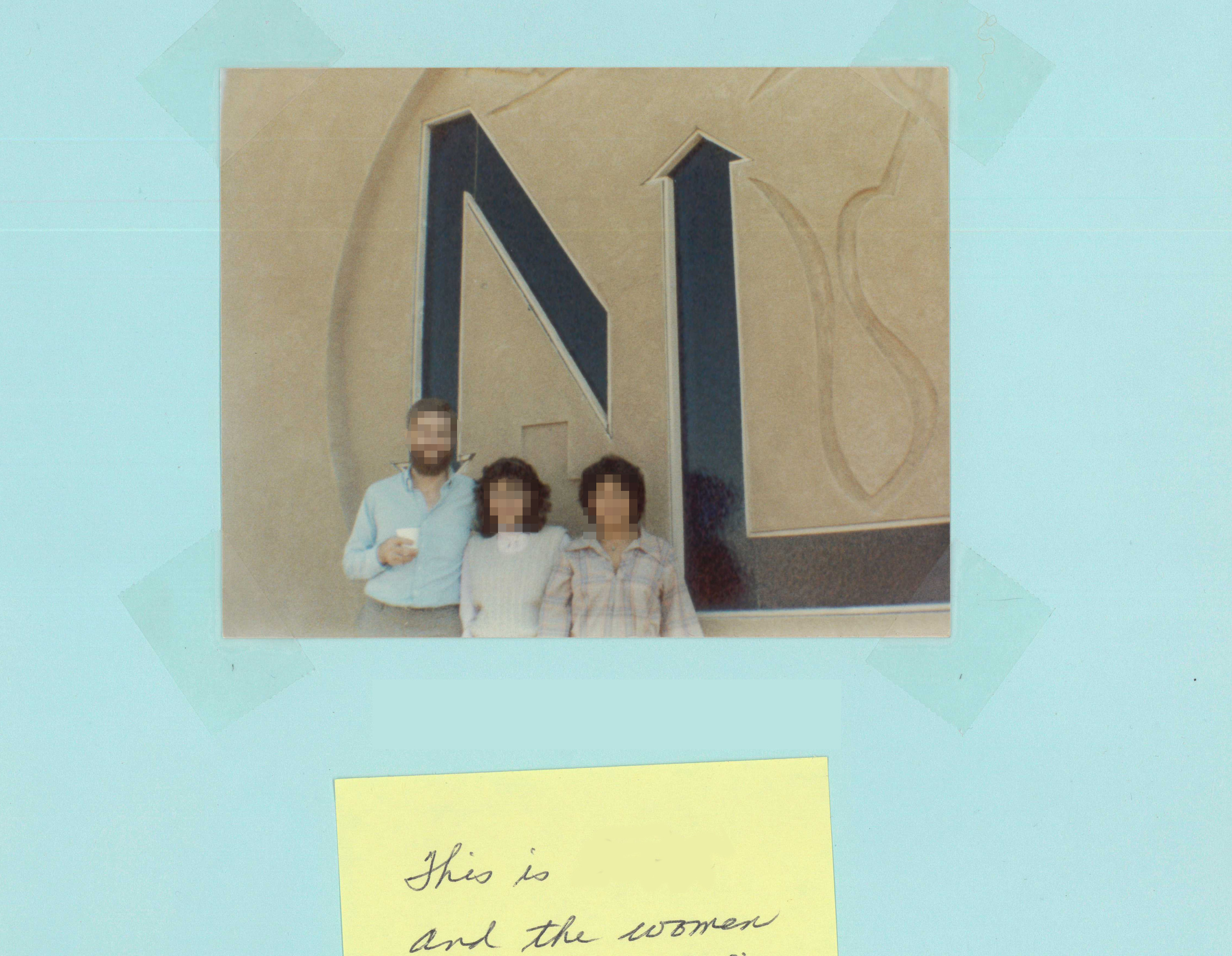 The next part of this story begins two months later in late October when Glen called to let us know that a Grand Jury was investigating what he and Demetria had done. They were charged with conspiring to bring two pregnant women into the country in violation of federal immigration laws. The U.S. Attorney Bill Lutz charged that Glen planned to “sell these women’s babies to Americans desiring to adopt babies.” We were advised to engage a lawyer. This call began my nine month “pregnancy” of worry about the implications for us, possible phone taps, and generalized anxiety.

In February the New Mexico Sanctuary Defense Committee held public meeting in Albuquerque to present information about the Sanctuary Movement and to support Glen and Demetria. John Fife was the featured speaker. We were advised not to attend since federal agents might be there looking for Glen’s accomplices. Arlo did not attend but I went and sat in the stairwell to listen to John and then left as soon as he had finished speaking. It was inspirational to hear what he and the other people in Tucson had done. 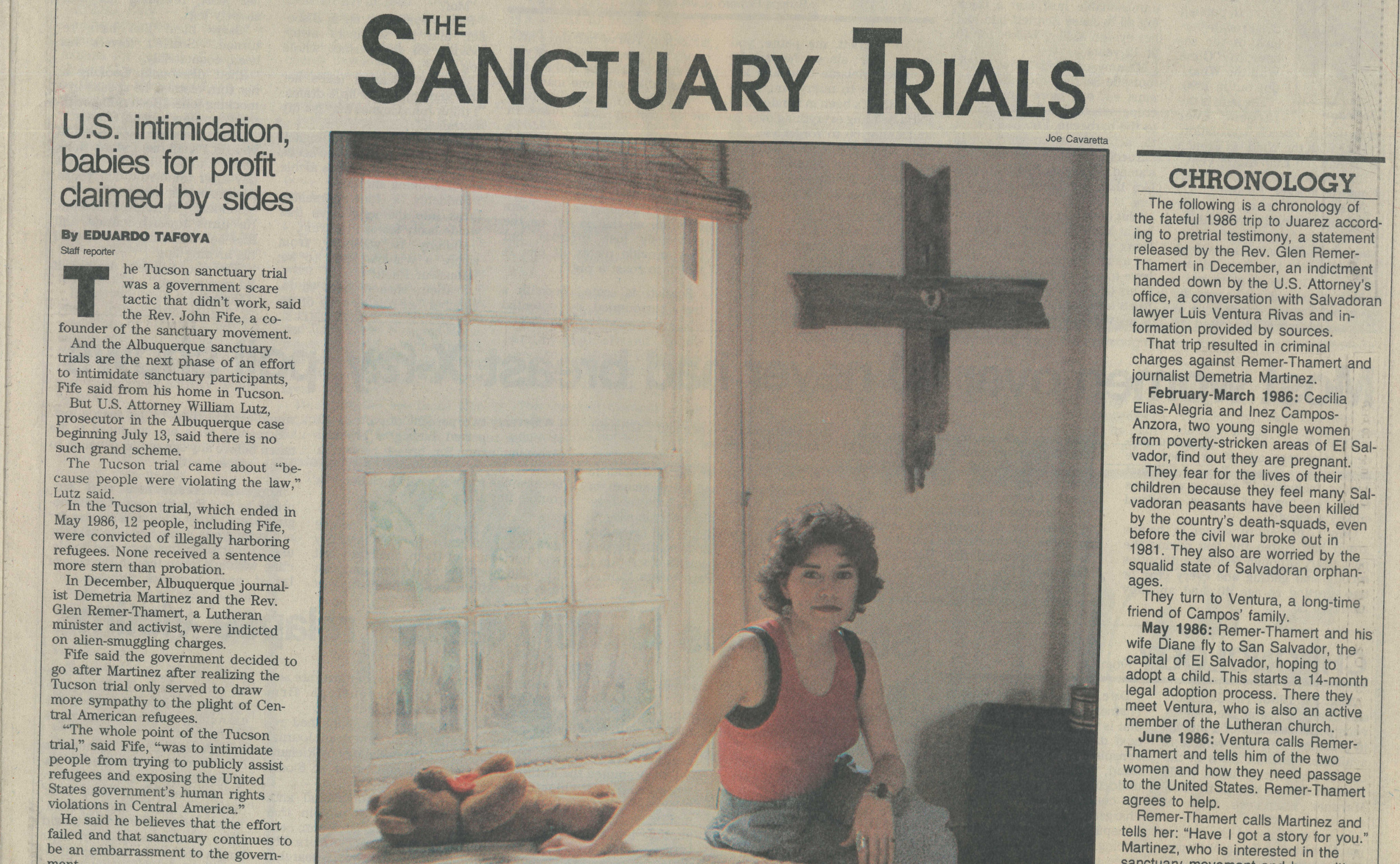 Our anxiety rose in June when the court began the pretrial hearings. The women had agreed to testify against Glen and Demetria in exchange for residence permits and the court learned that there were two other people with Glen and Demetria. Arlo's attorney offered his testimony in exchange for immunity but the court turned down his offer and we continued our quiet waiting. By mid-July, the court was engaged in jury selection and we were again talking with our lawyer.

The prosecutor was continuing to suggest that Demetria was an active participant rather than a reporter who was observing. They contended that since she did not write a story about the trip, she wasn’t acting as a journalist. Her contention was that she thought better of writing a story because it might endanger the women. Instead, she wrote a poem, and it was published in an anthology of poetry. Several places did readings of the poem or used it in connection with stories about the trial. The poem was incorporated in Demetria’s Turning: a Play in Poetry. The play was performed in June as a fund raiser for the New Mexico Sanctuary Defense Committee. Arlo felt strongly that his testimony could help support Demetria’s position. Despite being counseled that his statements could be self-incriminating, Arlo offered to testify.

Early in Arlo’s testimony, Judge Conway stopped him, excused the jury, and expressed his concern that Arlo might soon be likely to self-incriminate. After continuing the questioning, the judge wanted to make clear that he wanted to protect Arlo. Judge Conway asked Arlo’s lawyer Mr. Dixon, “…aren’t you opening him up to prosecution by allowing him to testify about anything on the trip?” A back and forth continued between the judge and Mr. Dixon, questioning the wisdom and the danger of Arlo’s possible testimony if he continued. Mr. Dixon explained to the judge: “I understand Your Honor’s concern about this. What I’m saying is that in certain circumstances people are willing to take risks, despite their right to assert a privilege, because of what they believe is their moral duty. And I believe this situation may fall under that category.” The judge then allowed Arlo to continue his testimony. After his testimony, Arlo was asked why he agreed to participate in this. His response was, “I believed in ‘sanctuary’ and I thought I could help.”

As a result of his testimony, Arlo was placed on leave by his employer, the State of New Mexico. The jury deliberated for four hours and returned “not guilty” verdicts on all counts. The editorial in the August 3, 1989 Albuquerque Journal summed it up: “That which was patently clear to anybody with the remotest exposure to defendants Glen Remer-Thamert and Demetria Martinez has now been proven in a court of law: Remer-Thamert is a compulsive doer of good deeds whose life work is helping others, and Martinez is a free-lance writer and journalist. Remer-Thamert embraces the ideals and objective of the Sanctuary Movement; Martinez observes them and writes about them for the public.”

There was great rejoicing and relief when the acquittal was announced and the trial was over. Arlo was able to resume his position with the state of New Mexico. On a few occasions Glen brought the women to worship services at New Life and during the Minute for Mission he shared a little about their story, but involvement by the entire congregation was minimal. True to the pluralism that was espoused by the congregation, a staunch Republican member shared with me her feeling that even though she did not approve of what we had done, she admired our courage to follow our beliefs. Another church family wrote that they wanted “to let you know how much we admire you and those involved with the ‘Sanctuary Trial.’” Tova Indritz, the Federal Public Defender, wrote “Your decision to testify was an act of great courage and moral principle for which I have great respect and admiration.”

Our lives mostly returned to “normal,” and the government didn’t bring any more charges related to this case. However, the problems in Central America were not over. Arlo and I continued to provide some support to the movement. We continued to be concerned about what was happening in the region and in 1991 we visited Guatemalan refugee camps in the Yucatán in Mexico and then went down to Guatemala to learn more about the conditions in that country.