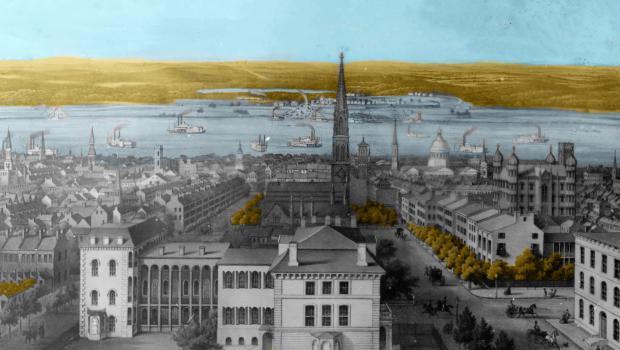 This calling is mirrored in the Bible Study theme of this Assembly, the Kin-dom of God. Bible Study Leader Raj Nadella says the Kin-dom of God is built “not through competition but in mutual cooperation and solidarity.” He goes on to add, “People who are part of Kin-dom use their resources and privilege to advocate for others who are less privileged.”

A quick riffle through the journals and magazines in the collections of the Presbyterian Historical Society shows that Presbyterians have been using their resources and privilege to help the less fortunate for a long time. Here is an example: One hundred and seventy years ago, Henry Hunter Johnston, the white former pastor of the St. Louis Associate Reformed Presbyterian Church (one of the ancestors of the current Trinity Presbyterian Church), traveled up the Ohio and Scioto Rivers, to visit his family in Chillicothe and probably to attend the annual meeting of the Synod of the West to seek his next call. 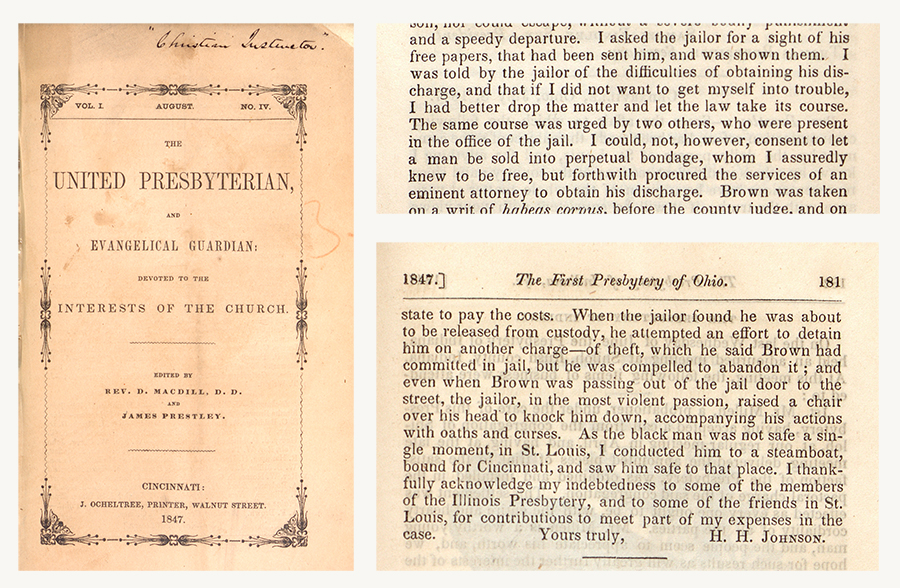 There in Chillicothe in the spring of 1847, he met an old friend living in the area, Isaac Brown, a free black man. Isaac was terribly worried. His son Samuel had taken the steamboat downriver to St. Louis, where he had been seized and thrown in jail, accused of being an escaped slave. The first Fugitive Slave Law (1793) said that one so accused was not permitted trial by jury and that a single judge had the sole and final say on the disposition of the case. He could send a human being to be sold as chattel without recourse. Samuel Brown had sent a plea to his father to send the papers attesting to his free status, as his situation was dire.

Naturally, Isaac Brown had sent his son’s papers to the jail in St. Louis, but word had come back that this was insufficient. Someone who knew him had to identify him personally, or he would be sold into slavery for the costs of housing and feeding him in the jail, etc. It was not safe for Isaac Brown or anyone in the southern Ohio black community to set foot in St. Louis, so, knowing that Johnston was travelling back to Missouri, Isaac Brown appealed to Johnston to assume the task. Returning to St. Louis in May, Johnston first visited the jail where Samuel Brown had already been incarcerated for three months. He found the jailer indeed recalcitrant and hostile to anyone the jailer regarded as an opponent of slavery. Johnston was uncertain as to whether he would be able to identify Samuel Brown, as it had been a decade since he had seen Samuel, when both had been growing teens. For all he knew, Samuel might look very different from their last encounter. Fortunately, the identification was easy—after he had dealt with the jailer, who saw the prospect of the proceeds from the sale of a healthy young slave receding before his eyes. The jailer tried to warn Johnston off, telling him the discharge of Brown would be difficult and, if he (Johnston) knew what was good for him, he would drop the effort. Johnston’s conscience would not permit him to go that route. He wrote, “I could, not, however, consent to let a man be sold into perpetual bondage, whom I assuredly knew to be free, but forthwith procured the services of an eminent attorney to obtain his discharge.” As the costs of the effort mounted, Johnston turned to his former Presbyterian parishioners, who made it possible for him to pursue the case to the end. Without the cooperation and solidarity of unnamed Presbyterians of St. Louis, who used their resources to attack injustice and racism, the advocacy of the more privileged Johnston would have been for naught. 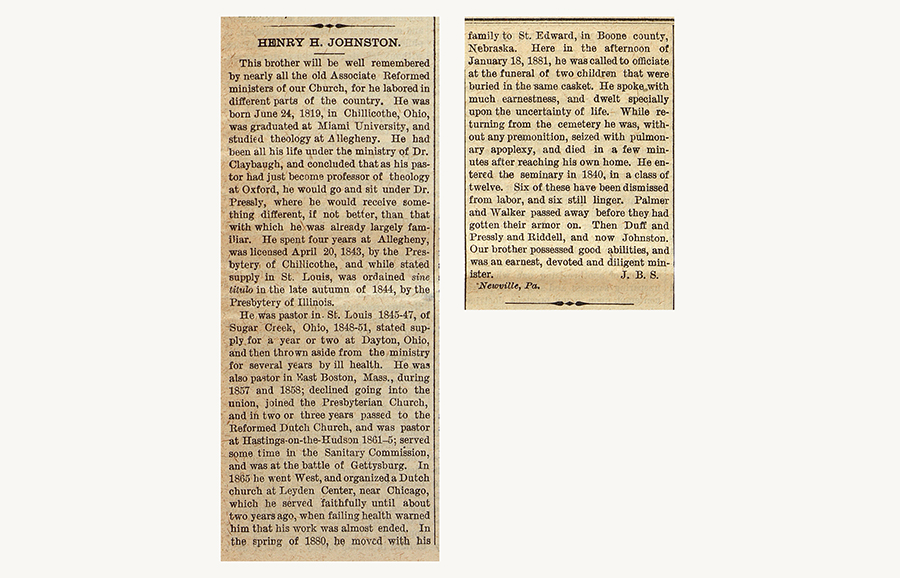 The judge’s writ of habeas corpus forced the jailer to produce Samuel Brown. Although the jailer and two supporters sat in the back of the courtroom and glowered during the hearing, between Johnston’s identification and the papers sent by Isaac Brown, the judge ruled clearly in Brown’s favor. At hearing this verdict, the jailer then accused Brown of theft while incarcerated, but this was so patently trumped up that it was quickly dealt with. The jailer was angry enough to chase the two men with a chair raised over his head, cursing, swearing and threatening their lives. Obviously, they were at risk in the community. Johnston hustled Brown to the steamboat landing, where both gratefully took a paddlewheeler up the Ohio to safe harbor in Portsmouth, OH.

Isaac and Samuel Brown disappear from public notice after Isaac’s return to Chillicothe, but Henry Johnston was received by Springfield A.R. Presbytery in October 1847 and installed as pastor of the Sugar Creek (Bellbrook, OH) A.R. Presbyterian Church on June 11, 1848. During his three-year tenure, the congregation doubled its membership with new confirmands. You can find more stories like these in journals like the Missouri Presbyterian, the Central Christian Herald, the Evangelical Guardian, North Carolina Presbyterian, and The Presbyterian (Philadelphia) held by PHS, and information about the men and women who lived then or the congregations and missions they served by searching Sheppard online on the PHS website. Isaac Brown’s story is found in Henry H. Johnston, “Letter to James Prestley, July 8, 1847,” The United Presbyterian 1 (1847): 179-81.

Ginny Rainey is a PHS board director and a former member of the Committee on the Office of the General Assembly. A ruling elder in the State College (Pennsylvania) Presbyterian Church and stated clerk of the Presbytery of Huntingdon, Ginny is also the author of Stewards of Our Heritage: A History of the Presbyterian Historical Society.