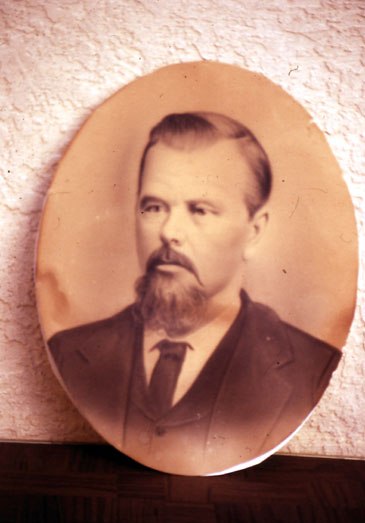 Rev. John Menaul (1834-1912), undated. Courtesy of the Menaul History Library of the Southwest.

“I have thought that my coming West was a great mistake. I must be in the wrong place or work, or I would not be so forsaken. In the midst of all my affliction vc [sic] in Africa, I could feel that I was in God’s work: but not so here. The trouble is the trying to serve two masters.”[1]

This was the reflection of the Revered John Menaul, a Presbyterian missionary, after five years of service in the New Mexico and Arizona Territories. A former missionary to Corisco, an island off the coast of West Africa, Menaul continued his missionary work on his return to the United States in 1870. His return came at an opportune time for the Presbyterian missionary enterprise. The post-Civil War years were significant in the expansion of U.S. settlements and Federal authority in the Western territories.[2] And a recurring theme in this development were the questions surrounding the racially, culturally, and religiously diverse peoples who lived in these regions; as historian Steven Hahn notes “their place on the social and cultural landscape and their relation to the nation-state had to be reckoned with.”[3] Missionaries were a key part in answer to these questions, being a vehicle for spreading “American civilisation” to these diverse peoples. “Not surprisingly, nation-states generally have great interest in education and other sorts of ‘missionizing’ activities…that aim at promoting new forms of character, participation, representation, market orientation, and faith,” as Hahn explains.[4]

Through the “Indian Peace Policy” of President Ulysses S. Grant the oversight of this assimilating process was allotted to select church denominations, with church appointees performing the dual role of Federal Indian Agent and missionary. It was an ambitious alliance between the church and the state to finally resolve the “Indian Problem.”

However, the relationship between these missionizing groups and the nation-state was far from harmonious or complementary, and as Menaul’s complaint suggests, he was conflicted in his service to “two masters: the United States Government and the Kingdom of God.” Yet this conflict is suggestive of something even more significant. As historians Gregory P. Downs and Kate Masur explain in their recent work, the growth of the United States across the American West was not a cohesive, smooth process of "a consolidating liberal nation," but something more "illiberal and chaotic."[5] Different groups and agencies, from railroad corporations and settlers to benevolent societies and religious institutions, advanced competing agendas and means to achieve them.

These complex and competing agendas played out in the lives of missionaries such as John Menaul. Born in County Tyrone, Ireland, in December 1834, Menaul graduated from Princeton Seminary in 1867 and later received medical training at the University of Pennsylvania. After two years as a Presbyterian missionary in Corisco, under the Board of Foreign Missions of the Presbyterian Church in the U.S.A. (PCUSA), Menaul was dispatched to Fort Wingate, New Mexico Territory, as a missionary to the Navajo Indians, with the role of physician in the employment of the Federal Indian Agency for the Navajo Agency.[6]

Initially, Menaul was optimistic in his new posting, writing in December 1870 to the secretary of the board, Rev. Dr. John C. Lowrie, “that it is the most promising field here. The people are very kind and industrious. They want a teacher. We alone [the PCUSA] occupy the ground. The Navajo Agent does, and I think will do what he can to help me.”[7]

Although Menaul noted the opposition the mission faced from “the white man”— presumably settlers—located near Fort Wingate, his optimism continued.[8] With his medical training, Menaul was in high demand, “I am succeeding beyond my expectations in my practice of medicine; have many patients, who are generally very well satisfied.”[9]

However, as the years progressed his correspondence shows a growing unease, particularly regarding corruption among Federal Indian Agents. He cautioned in one letter, “The less one knows about [Indian] Agencies the better, especially if he wishes to live in peace, or hold his position.”[10] In more stark terms, he added in a later letter, “Most of the [Indian] Agents do not care a cent for the Indian; and will not be interfered with in their [corrupt] schemes so a man must either shut his mouth, sit down and do nothing; or else, by some excuse, loose his place for a proper person.”[11]

This unease progressed to complete disillusionment, to the extent to which he thought “my coming West was a great mistake.” Though participating in a shared endeavour of westward expansion and assimilation of indigenous peoples, Menaul (and the wider Presbyterian missionary enterprise of which he was a part of) possessed a different vision of the American West from fellow agencies involved in the process of expansion. In particular, he found the attempt to advance the two different agendas of his “two masters,” the U.S. Government and the Kingdom of God, untenable. “To go under the control of an Indian Agent to do God’s work,” Menaul wrote, “is utter folly and useless.”[12]

--Andrew Short is a PhD candidate at University College London. His research examines the domestic missionary enterprise of the PCUSA in the post-Civil War era. Along with colleagues at UCL, he blogs at The Young Americanists.