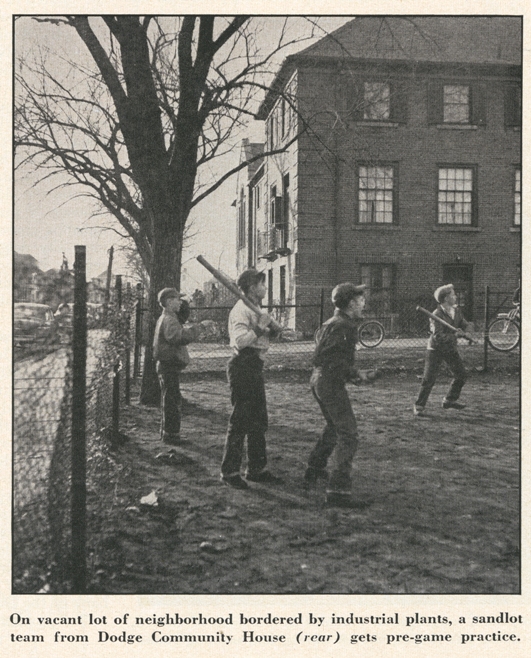 From "Presbyterian Life," May 15, 1954: "Presbyterians in Detroit." "On vacant lot of neighborhood bordered by industrial plants, a sandlot team from Dodge Community House (rear) gets pre-game practice." Photo and text by Carl G. Karsh.

Sixty years ago, the Presbyterian Church in the U.S.A. held its 166th General Assembly in Detroit. The U.S. auto industry was booming, and the city had acquired considerable wealth and size. At the same time, however, Detroit was experiencing an “inner-city problem.” Presbyterian Life, in the May 15, 1954, issue, wanted to educate its readers and GA commissioners about these problems, even amidst the general glow of mid-1950s prosperity.

The magazine captured the great movement of people that had characterized Detroit during and after World War II. “Practically within the shadow of industrial smokestacks are neighborhood houses and inner-city churches trying to rearrange their programs of activities to attract the new groups of factory workers who now live in the homes formerly occupied by church members. Miles away, in suburbs whose growth is hard to equal, is the bulk of Presbyterian congregations, including a few of the most well-to-do in the denomination.”

Presbyterian Life listed by name some of the prominent automobile executives who were members of those wealthy churches in suburbs such as Grosse Pointe. It also told readers about relatively new congregations such as the Church of the Master, comprised mostly of industrial working families.

Many city congregations faced the question of whether or not to welcome African Americans into their churches. Some congregations like St. Andrews Presbyterian Church “[were] making noteworthy progress in race relations,” despite some initial resistance and departures of white members. The community around St. Andrews had changed in the last decade. By 1954, of the many office workers who had moved in, 60 percent were African American. Rev. Malcolm Sylvester reported that St. Andrews now had 30 black families in worship, but that his congregation still remained almost 90 percent white.

National Missions exhibit at the Presbyterian Church in the U.S.A. General Assembly in Detroit, Michigan, 1954.

Leading up to the 1954 General Assembly, the Presbytery of Detroit had reiterated the PCUSA stand in favor of integrated churches and called on congregations in Detroit to minister to all persons in their communities.

At the assembly meeting itself, the Board of National Missions publicized their 1954-1955 theme, “Accent on the City.” The Standing Committee on Social Education and Action specifically addressed the transforming metropolis in its report, approved by the assembly. Not only did the PCUSA support the U.S. Supreme Court’s recent Brown v. Board of Education decision ruling school segregation unconstitutional, but the assembly stood behind the committee’s call to sessions, ministers, and church members to “make it their Christian concern to communicate the claim of Christ to every person within reach of their church….We call upon all Christians to work for, not wait for, a Church and a society which rise above racial restrictions.”

As Presbyterians gather in Detroit for the 221st General Assembly this June, they can reflect on the history of the past 60 years and what it means for the Church, Detroit, and Americans in general. We may not yet be in a place where we can rise above racial restrictions and the economic upheavals that have marked the nation’s cities. And yet, as COGA moderator Vince Thomas says in a video about Detroit: “People around the country, people of faith especially, are standing in solidarity with the people here in this time of greatest need. The church behind me [Fort Street Presbyterian Church in downtown Detroit], the place where I grew up, just put a 100-year roof on this building. They’re not going anywhere. The Presbyterian Church isn’t going anywhere either and if we have this sense that we’re in this together for the long haul then that will give us both a sense of hope and a sense of inspiration for the work that we are called to do when we get back home.”