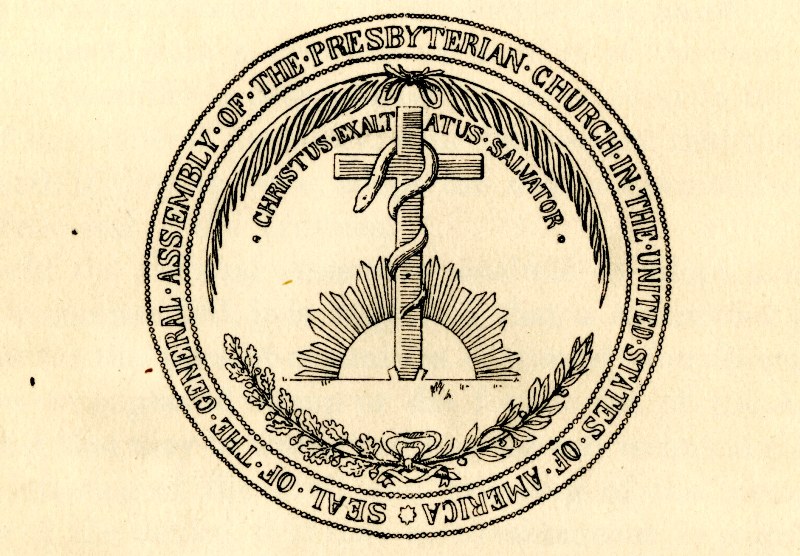 "Form of Seal of the General Assembly as Recommended by the Committee," 1891.

At the 1891 General Assembly in Detroit, the Reverend Henry C. McCook and other members of the Committee on the Seal of the Church presented their recommendation for a new church emblem. In their official report, the committee members described the proposed seal and laid out arguments for its elements that alluded to biblical history and texts; Greek, Egyptian, and Hindu mythology; and earlier Presbyterian seals.

In conducting its research, the committee had discovered a seal it believed to have been adopted by the Trustees of the General Assembly as early as 1799. Featuring a serpent on a cross in a bare landscape, the predecessor seal served as the basis for the design offered up to the 1891 assembly—a design the committee embellished with a rising sun symbolizing Christ, olive and oak leaves symbolizing peace and strength, and palm leaves referencing the seal of the Westminster Assembly.

Much of the committee’s report argues the merits of the snake-draped cross, which “has been the occasion of some misunderstanding and unfriendly criticism.”[1] If the committee members thought such an erudite document would preempt further criticism, they were sorely mistaken. A newspaper headline describing the discussion sums it up well: “The Seal Question a Lively Issue – No Quarter for Snakes.”[2] The serpent on the cross was objected to because it was “repulsive, heathenish, obscure, needing an archaeological professor to explain it, and also because it’s unscriptural.” Various anti-snake assembly speakers argued that, beyond the serpent’s obvious associations with Satan in the Bible, people’s instinctive dislike for the breed meant that women and children would recoil upon seeing the proposed seal. Sentiment seemed to be running strongly against the reptile.

McCook, the Reverend George Junkin, Jr., and several other pro-snakers argued back that, in fact, the serpent was not unscriptural (John 3:14; Exodus 4:3-5), and that there would be valuable continuity in sticking with a symbol used on the older Presbyterian seal. People, they maintained, should not allow themselves to be swayed by such an unfair prejudice against one of God’s creatures. Regarding the snake’s physical beauty, McCook said he knew people “who even thought the spider was ugly, yet he was sure he could produce authority for the statement that spiders, if we take them by and large, are more beautiful even than butterflies.”

In the end, the assembly was not persuaded, and a resolution was passed that an open Bible be substituted in place of the serpent on the cross as the emblem’s central symbol. Despite this instruction, which forced McCook and the other committee members back to the drawing board, the snake still found its way onto the new seal. The General Assembly in 1892 approved a seal featuring a Bible-bound serpent and cross next to the decisive inscription, “The Word of God.”