Summer in the City 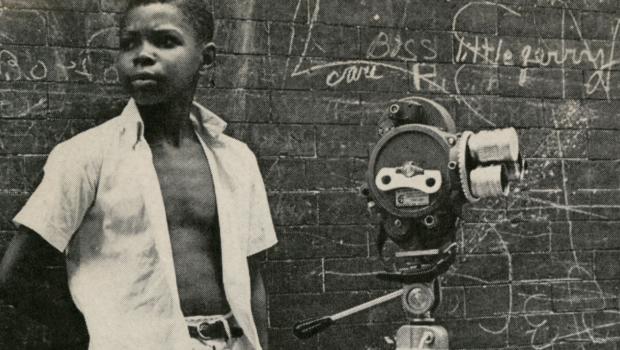 Forty-five years ago this month, six youngsters from West Philadelphia held a public screening of a short autobiographical film. This may not seem remarkable in the age of YouTube, but their 16mm home movie, Not Much To Do remains a fascinating document, and a testament to the power of community partnerships to amplify the voice of the city.

In 1966, Robert D. Stoddard, a recent graduate of Princeton Theological Seminary and assistant pastor at Tabernacle Presbyterian Church in West Philadelphia developed a film club for the local children who attended Tabernacle's Christian Education class. Stoddard's initial notion was to have the children film adaptations of Bible stories, but a professor at the University of Pennsylvania's Annenberg School of Communication, Sol Worth, advised him to let the children simply roam with the camera. With funding from the Board of Christian Education and from the Presbyterian Women's Thank Offering, six youngsters--Barry Griffin, James Lucas, Ronald Mapp, Luerell Mapp, Michael Watters, and Howard White--were taught to shoot, develop and edit film. An Annenberg student, Ben Achtenberg, served as director.

Edited in the library at Tabernacle, set to a jazz organ soundtrack, a plotless film coalesced around a guiding theme: there is not much to do in Philadelphia. The irony of the film's title of course is that the group finds plenty to do: they swim in the fountains in front of the Philadelphia Museum of Art, slapbox on the roof of an abandoned firehouse, roll down hills in Fairmount Park, roam free. Presbyterian Life called the film "magnificently non-slick," adding "It conveys the swelter of a city alley in August, the terribleness of skeletons in a museum, the joy of rolling down a grassy slope [...] the authentic word about being young, about wriggling out of the handcuffs of inexperience, about having so much to do even when there's not much to do."1

The boys continually talk about getting caught--while climbing around in the abandoned firehouse, while scrambling down the banks of the Schuylkill, while sneaking into the Wistar Institute. But the city itself appears largely deserted, and the only figures around to assert any authority are rumpled-looking beat cops. Coming in the wake of Philadelphia's 1964 Columbia Avenue riots, the film treats the police department's reputation for brutality as the stuff of fairy tales.

"Not Much To Do" premiered at the Annenberg School on Monday, November 14, 1966. The Philadelphia Tribune envisioned it as the work of skilled social satirists: "the half-hour documentary film takes pot-shots at the City for failing to provide adequate recreation facilities for youngsters, and at police for intolerance and lack of understanding."2 Rev. Stoddard partly reinforced this view, emphasizing the inaccessibility of the nearest gym, at the Drew School at 38th and Warren. The film was received affectionately at Annenberg, and six copies were prepared for distribution to schools and church groups.

Two of those copies are held here at PHS, along with clippings collected by Rev. Stoddard. With assistance from NFL Films, we've transferred the film to DVD-video and MPEG-4 formats. Watch this space for more news about Not Much to Do.

While the film may have enlightened white, adult audiences to the realities of summer in the city, for the six youths not much changed: asked by the Philadelphia Evening Bulletin what kids from the neighborhood thought of the new filmmakers, Michael Watters replied with equanimity, "Some of our friends call us pros and some call us bums."3