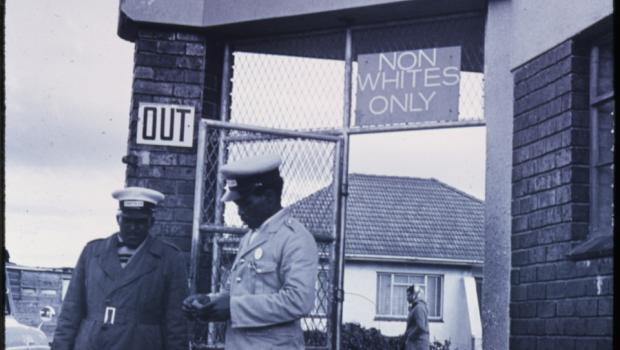 "#37. Guards, non-whites only sign. The Ford and Citicorp resolutions dealt with the activities of both companies in South Africa." From 95-0412. box 5. 122C. Mission Responsibility Through Investment slideshow.

On the 21st of March, 1960, police officers in the South African township of Sharpeville opened fire on protesters, killing 69. With the incident fresh in its mind, that year the 172nd General Assembly of the United Presbyterian Church in the U.S.A. addressed apartheid for the first time:

The 172nd General Assembly: Expresses its horror at the dangerous conditions in South Africa which the inconsistencies and moral absurdities of apartheid have brought upon that country; Declares its deep concern about the course of events which seem to move with relentless logic toward a bloody conclusion; Calls upon our Government to continue to use its influence both directly and through the United Nations, to persuade the Union of South Africa to turn from the policies which bring only despair; and Prays that the churches of South Africa be faithful instruments of God's grace for reconciliation among all men.1

From that moment until the collapse of the apartheid regime, American Presbyterians expressed, through resolutions, letters, and lobbying, their conviction that all people are equal before God. After years of escalating violence in South Africa, the 177th General Assembly condemned the government of South Africa for much more than committing "moral absurdities":

Apartheid is maintained increasingly by a totalitarian force reminiscent of Nazi Germany, and is described by the International Commission of Jurists as "copying the worst features of Stalinism." Apartheid is gravely inimical to the present and future life, work, and witness of the Christian church because its ruthless deeds are blasphemously perpetrated in the name of Christ.

UPCUSA General Assembly statement on apartheid, 1965. by david_phs on Scribd

The General Assembly then set itself twin tasks: to educate Presbyterians about the realities of life in South Africa, and to study the economic support which the United States gave the Republic of South Africa. These efforts became the office of Mission Responsibility Through Investment (MRTI) and the Task Force on Southern Africa. The work of educating the church was necessary for several reasons. As the 1965 General Assembly noted, unrest and repression in South Africa had, for Americans, been overshadowed by the Cuban Missile Crisis and the escalating war in Vietnam. Many Presbyterians adhered to reflexive anti-communism; for them, if the South African government said it was beset by communists, Americans were duty-bound to support it. Letters such as these document the political headwinds facing the General Assembly's uncompromising stance on human equality:

Letters of Titus C. R. Mendell on South Africa, 1970. by david_phs on Scribd

The General Assembly continued to support the arms and oil embargoes of South Africa, and to advocate for an independent Namibia. In the 1970s and 1980s, Mission Responsibility Through Investment issued resolutions to the Ford Motor Company, Citicorp, General Electric and Exxon urging divestment from South Africa. For many Presbyterians, divestment was not a clear moral imperative: MRTI was asked to consult with Presbyterian businessmen throughout New York's Hudson Valley, where thousands of General Electric employees lived and worked.2

Through the World Council of Churches (WCC), Presbyterians also positively contributed to political groups working against apartheid. From 1970 to 1974, the WCC issued over $1 million in grants to anti-racist groups. In response, the South African president B.J. Vorster accused the Council of supporting "communist organizations and terrorists," and demanded that South African churches leave the WCC.3 In 1985, Presbyterian leaders James E. Andrews, J. Oscar McCloud, and Patricia McClurg attended a WCC meeting in Harare, Zimbabwe, which called for divestment and a consumer boycott of South Africa.4

Exxon's board moved to divest in 1987, but by this time the economic strain of running one state with multiple infrastructures -- separate cities, highways, schools and hospitals -- was obvious and the apartheid regime's days were numbered. Longtime Presbyterian representative to the United Nations Robert F. Smylie wrote: "[...]the church has tried to maintain a truly world view [...] influenced by its understanding of the sovereignty of God over all creation, by its belief that all have been created equal in the eyes of God, by its understanding that Jesus--the Christ--came to bring reconciliation, justice, and peace to all."5

The Presbyterian Church's decades'-long struggle with South Africa demonstrates the difficulty of implementing its moral imperatives, and reveals the hard work of making prophecy real.