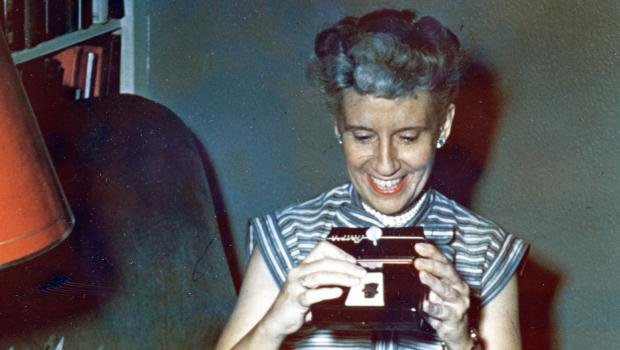 “Leave safety behind. Put your body on the line. Stand before the people you fear and speak your mind--even if your voice shakes. When you least expect it, someone may actually listen to what you have to say. Well-aimed slingshots can topple giants.” --Maggie Kuhn

In 1981, Congress established National Women's History Week to be commemorated the second week of March. In 1987, Congress expanded the week to a month. Every year since, Congress has passed a resolution for Women's History Month, and the President has issued a proclamation. The theme for 2014 is “Celebrating Women of Character, Courage, and Commitment.”

Maggie Kuhn, whose papers we recently processed, exemplified these noble virtues. She was certainly a character, certainly courageous, and unquestionably committed to social and political causes. Kuhn is most famous for her pithy quotes and for founding, at age 65, the Gray Panthers, an organization that advocated for senior citizens' rights. What is less well-known is that she didn’t take up the mantle of activism in her golden years. She was a lifelong activist who had spent decades fighting for human rights, social and economic justice, global peace, integration, urban renewal, and an improved understanding of mental health issues by the time the Gray Panthers came into being in 1970.

Kuhn worked for the YWCA in Cleveland from 1927 to 1930 and for the Germantown YWCA in Philadelphia in the 1930s. In the 1940s, she worked at the United Service Organizations (USO) Division of the National Board of the YWCA in New York where she developed interfaith and interracial programs. After World War II, she served as program coordinator for the General Alliance of Unitarian and Other Liberal Christian Women in Boston.

With this background, Kuhn came highly recommended to the Presbyterian Church in the U.S.A. in 1948.  One reference described her as “a young woman of real vision and Christian purpose…she works unceasingly for the brotherhood of man.  I regard her as one of the finest Christians I have known, and she would be most effective in any field of social education and action from the Christian point of view.”

Working through the Presbyterian Board of Christian Education’s Department of Social Education and Action, Kuhn edited Social Progress, oversaw community relations and social welfare programs, and consulted with women’s groups. She served on the staff of the BCE’s Office of Church and Society and then the Board of National Mission’s Division of Church and Race. In January 1961, Kuhn participated in the first White House Conference on Aging as a consultant and member, gaining valuable insights that would serve her well in the Gray Panthers.

In 1970, Kuhn turned 65 and had to leave her job with the United Presbyterian Church in the U.S.A. because of the mandatory retirement policy then in place.  Reflecting on that time in 1977 for Parade magazine, Kuhn said even though she knew mandatory retirement was coming, it shocked her. “I suddenly felt wounded and angry at having been sent out to pasture to get lost. Then I figured there must be thousands of old people just like me, and so I decided the time was ripe for us to fight back.”

Throughout her life, Kuhn was affiliated with many service and advocacy groups, including the Memorial Society of Greater Philadelphia; Hospice, Inc.; the National Institute for the Seriously Ill and Dying; the National Senior Citizens Law Center in Washington, D.C.; the National Committee for Responsive Philanthropy; the Bread and Roses Community Fund; and the National Policy Center on Employment and Retirement in Los Angeles.

Even in her later years, Kuhn had an abundance of energy.  In addition to her commitment to social causes, she authored several books and articles that followed her arc of activism: You Can't Be Human Alone, Get Out There and Do Something About Injustice, and Maggie Kuhn on Aging. She published her autobiography, No Stone Unturned: The Life and Times of Maggie Kuhn, in 1991. Kuhn died in 1995, but her vision of what society could be—and should be—continues to serve as inspiration for old and young alike.