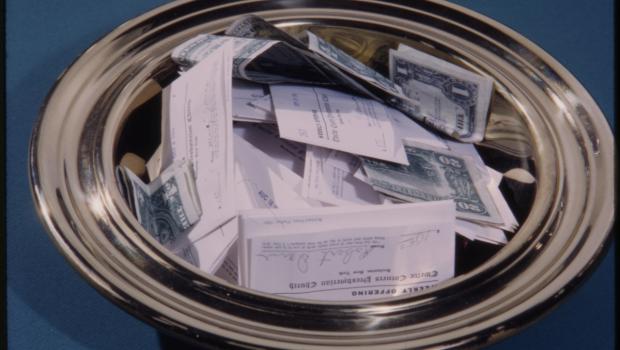 "For this mission and ministry, to which the promises of God are given, the corporate church is made responsible; and is, therefore, entitled to sufficient material support from its members. This stewardship of means, as well as devotion of life, is incumbent upon faithful members of the church." From KIT 319. United Presbyterian Church in the U.S.A. The Teaching and practice of Christian stewardship, 1960s.

Circular letters, fairs, bazaars, gambling, kisses for sale, bachelorette auctions, wills and bequests, pew rents and the tithe, gifts of livestock—American Presbyterians have used every method known to raise funds for the maintenance of pastors and the promotion of missions. The story of Presbyterian fundraising involves every aspect of the church, from foreign missions, to women’s rights, to doctrinal and cultural conflict.

American Presbyterians inherited their Scottish forebears’ abhorrence of endowed pastorates. Throughout the 18th century they relied on pew rents to maintain church buildings and to pay their pastors; families would pay a set sum per year to reserve seats in the church. With the advent of the Free Church movement, pew rents fell out of favor in Scotland and the United States alike; this left support by voluntary, systematic beneficence. By mid-century, the expanding population of European immigrants west of the Alleghenies demanded ministers, but skimped on support. William M. Engles’ polemic on Luke 10:7 “the laborer is worthy of his hire,” describes ministers lured to rural congregations with the promise of pay to be collected by subscription, only to be jilted when the subscription came due. While the apostles sold their belongings to form a common fund, Presbyterian ministers, riding out to officiate at weddings “amidst the sleet of winter,” were paid with “nothing more substantial than a piece of wedding cake!”1

With the dawn of the Gilded Age, the wildly diverse forms of fundraising performed by women’s and youth groups came under attack by pastors who questioned whether the means of fundraising had displaced the ends. And the means, if the critics of new-style church fundraising are to be believed, were extraordinary: baby contests, kissing booths, bachelorette auctions, gambling, dancing, and ice-cream “sociables.” Alfred E. Myers, of the Presbyterian Church (Owasco, N.Y.), decried churches which staged operettas, “Xylophon” solos, slave-camp meeting sing-a-longs, maple-sugar festivals, and bachelorette auctions, wherein, “a group of young gentlemen go through the form of selling at auction a young lady to the highest bidder.”2

As few other commentators would in the coming century, Myers asks the church to distinguish between commerce and communion, seeing in church fundraisers, “[…]either sham trade or sham charity. If it is real trade, it is sham charity; if real charity, then sham trade.”3 Joseph Smith Van Dyke of the Presbyterian Church (Cranbury, N.J.) was driven to further apoplexy, caustically imagining the apostles stooping to American depths: John selling sugar-plums, Matthew selling raffle tickets, Andrew offering “drafts of opiates,” James with a fishing-tackle booth, and Mary Magdalene running what can only be described as a peep-show, ushering men, “[…]to a tent whose concealed mysteries were revealed to the curious on the payment of a shekel.”4

By the turn of the century, the reform of church amusements can be linked to the struggle for women’s rights. One commentator notes that, denied entry into the chambers of power in churches, women took up fundraising as their contribution to the cause of Christ. If one wanted to end the tawdry bazaars and entertainments of the age, one simply had to elect women as elders of the church. In the meantime, notable women funded efforts to improve American women’s lot on their own. In one of the age’s most impressive acts of philanthropy, the widow Margaret Olivia Sage gave away $45 million of her $75 million inheritance over the twelve years from her husband’s death in 1906 to her own in 1918. Sage grew up in First Presbyterian Church (Syracuse, N.Y.), and was a twenty-year old student at Troy Female Seminary during Elizabeth Cady Stanton’s Seneca Falls meetings. While her husband’s miserliness limited her activities in support of women’s rights, she remained active in Women’s Mission Bands and in the temperance movement, and hinted at philanthropy to come, writing, “A rich woman should be a missionary among her poorer sisters.” After her husband’s death, Sage established the Russell Sage Foundation with a $10 million gift. In her will she left $1.6 million each to the PCUSA Women’s Boards of Home and Foreign Missions, among other women’s groups.5

"Synods and presbyteries should understand themselves as part of a total national church, contributing responsibly to the church as a whole." From KIT 319.

The ecumenical verve of the period following the First World War included interdenominational efforts to educate Christians about stewardship. Presbyterians were instrumental in the Forward Movement, the Student Volunteer Movement, the New Era Movement and other ecumenical efforts. In the wake of the Great Depression, ecumenical stewardship education included serious criticism of the economic order which had precipitated the crisis. In a study guide for congregations produced by the Presbyterian Church in the U.S.A. Board of Christian Education, Irwin Paulsen cites the New Testament passages on the widow’s mite and the camel through the needle’s eye and asks, “How Christian is a nation when two per cent of the population own sixty per cent of the wealth? Can America continue its laissez-faire policy in industry and avert some form of revolution?” Giving, for Paulsen, is not for prestige, nor is it a rote requirement; it is sacrificial, a “giving of one’s self.”6

Herman Weber, writing for the United Stewardship Council, echoes Paulsen’s radicalism, cautioning congregations against creeping commercialism and superficial piety. Congregations which fundraise through, “’painless’ methods of giving (such as bazaars, card parties, entertainments, and the like),”7 miss the mark. Giving transforms the giver, and transforms social relations. From the establishment of free churches, to the radicalism of the New Deal, to contemporary arguments regarding investment in Palestine, Presbyterians have carried on an arms-length discourse with the world of commerce, and they continue to balance the material needs of mission with their duty to create communion.

2. Myers, Alfred E. The sociable, the entertainment and the bazar. Philadelphia : Presbyterian Board of Publication, 1882. p.27