Christmas in the Mission Field 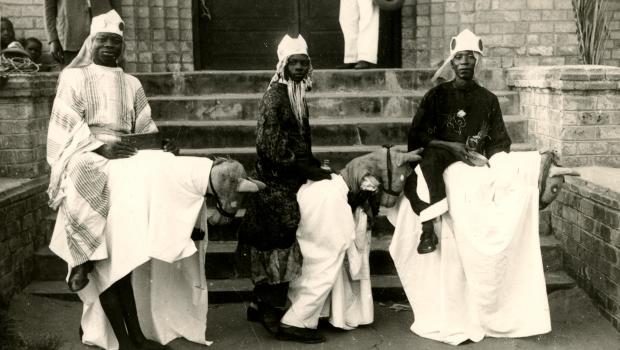 Christmas pageant in Luebo, circa 1960s. From Vass Family Papers.

American Presbyterians have been celebrating Christmas in the mission field since at least 1802, when the Presbyterian Church in the U.S.A. (PCUSA) passed formal resolutions committing itself to spreading the good news among Indian Tribes and new settlers in North America. The PCUSA would go on to become the first Protestant denomination to organize a missions committee at a national level and, building on that success, the larger Board of Missions and the Board of Foreign Missions (today known as the Presbyterian Mission Agency).

An 1838 resolution passed by the PCUSA’s General Assembly stated “it has always been the duty of the church to make known the gospel to all the world.” Before the end of the nineteenth century the denomination would make good on that commitment by organizing mission stations in Africa, Brazil, China, Columbia, India, Iran, Iraq, Japan, Korea, the Philippines, Syria, and Thailand. Telling the story of Christmas, in print, picture, and dramatic scene, became important parts of spreading the Word.

The Presbyterian Historical Society holds a wealth of personal papers for missionaries dating back to the early nineteenth century, as well as the records of many agencies, boards, committees, and church organizations responsible for coordinating foreign and domestic mission work at the national and local level. A number of wonderful yuletide images can be found in these collections. Merry Christmas!