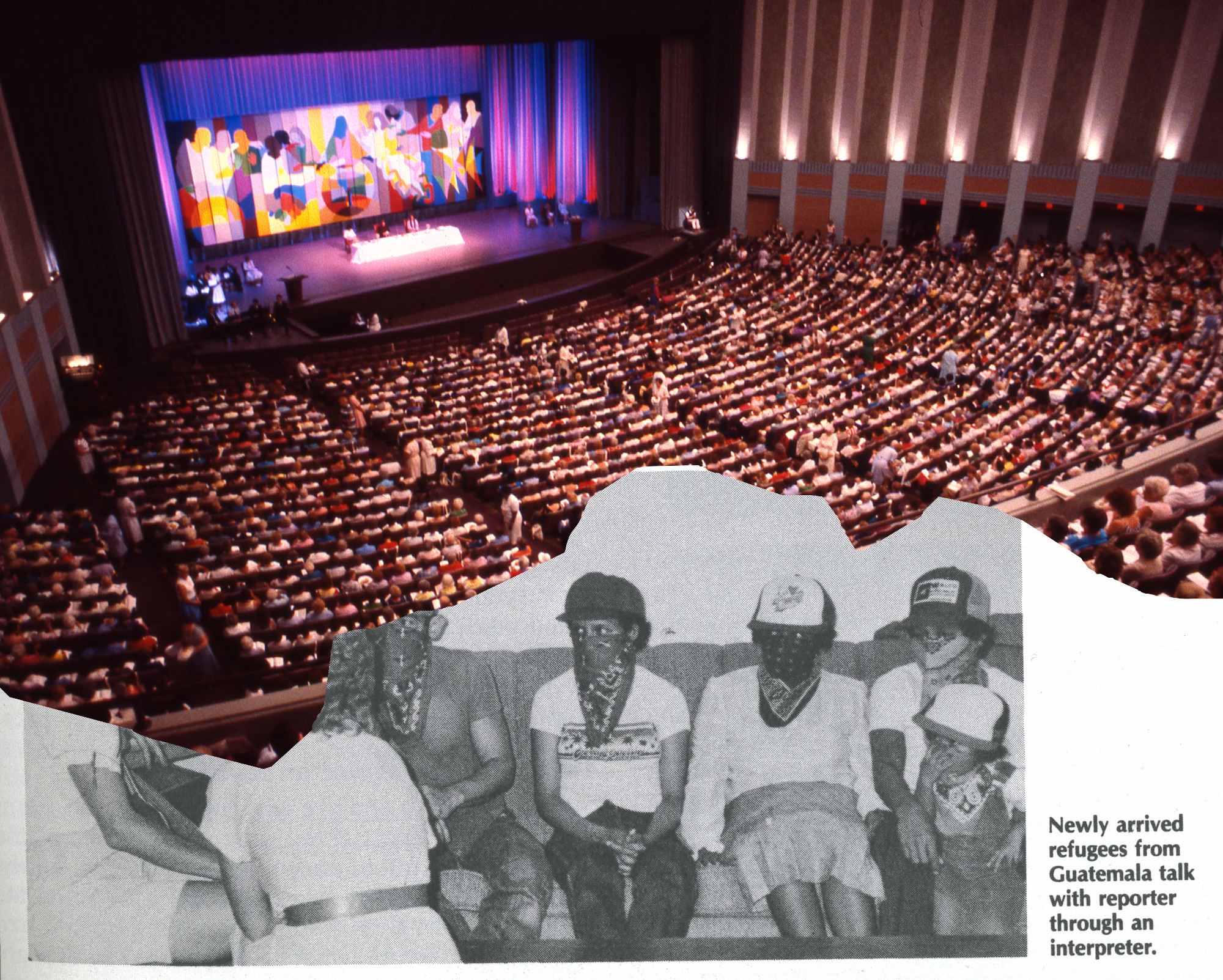 United Presbyterian Women in plenary, 1985, from Slides B140; refugees from Guatemala, in Concern magazine, 1985.

When United Presbyterian Women gathered at Purdue University in West Lafayette, Indiana in the summer of 1985, Carol Weir thanked them for their support, and a delegation from the Soviet Union gifted them a painted icon. The crowd heard from speakers representing the Third World and from the nuclear disarmament movement. Of these women, the most remarkable women bearing witness at the event were those who had fled US-sponsored military and paramilitary violence in Nicaragua and El Salvador. The next-most remarkable were the women who helped shelter them here in the United States

We've recently digitized audio recordings of the event, and you can listen to them here. 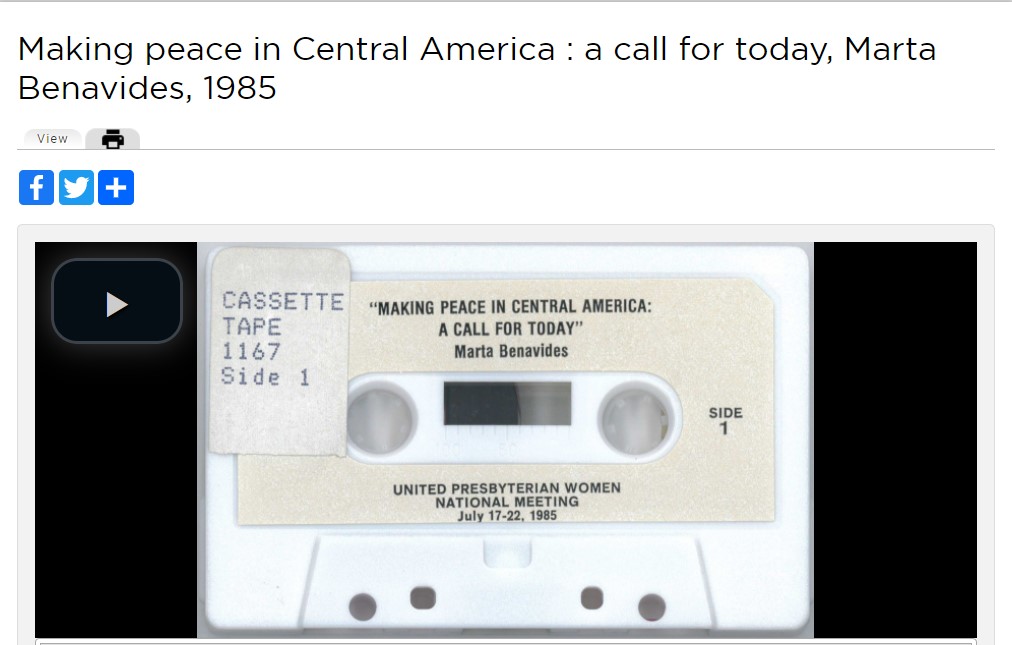 Listen to Marta Benavides in Pearl.

Marta Benavides, an agrarian reformer and collaborator with Oscar Romero, living in exile from her native El Salvador, began by introducing the assembly to her language

"Buenas noches. You notice that in our tradition we do not wish one goodnight or evening to you. We wish you plenty of them. Buenas noches. Buenos dias. We also say. Good days to you."

Benavides bringes her audience to an understanding of what it means to be a "visible sign" of God's presence in Central America -- amid poverty, malnutrition, infant mortality, there is also the specter of state terror. 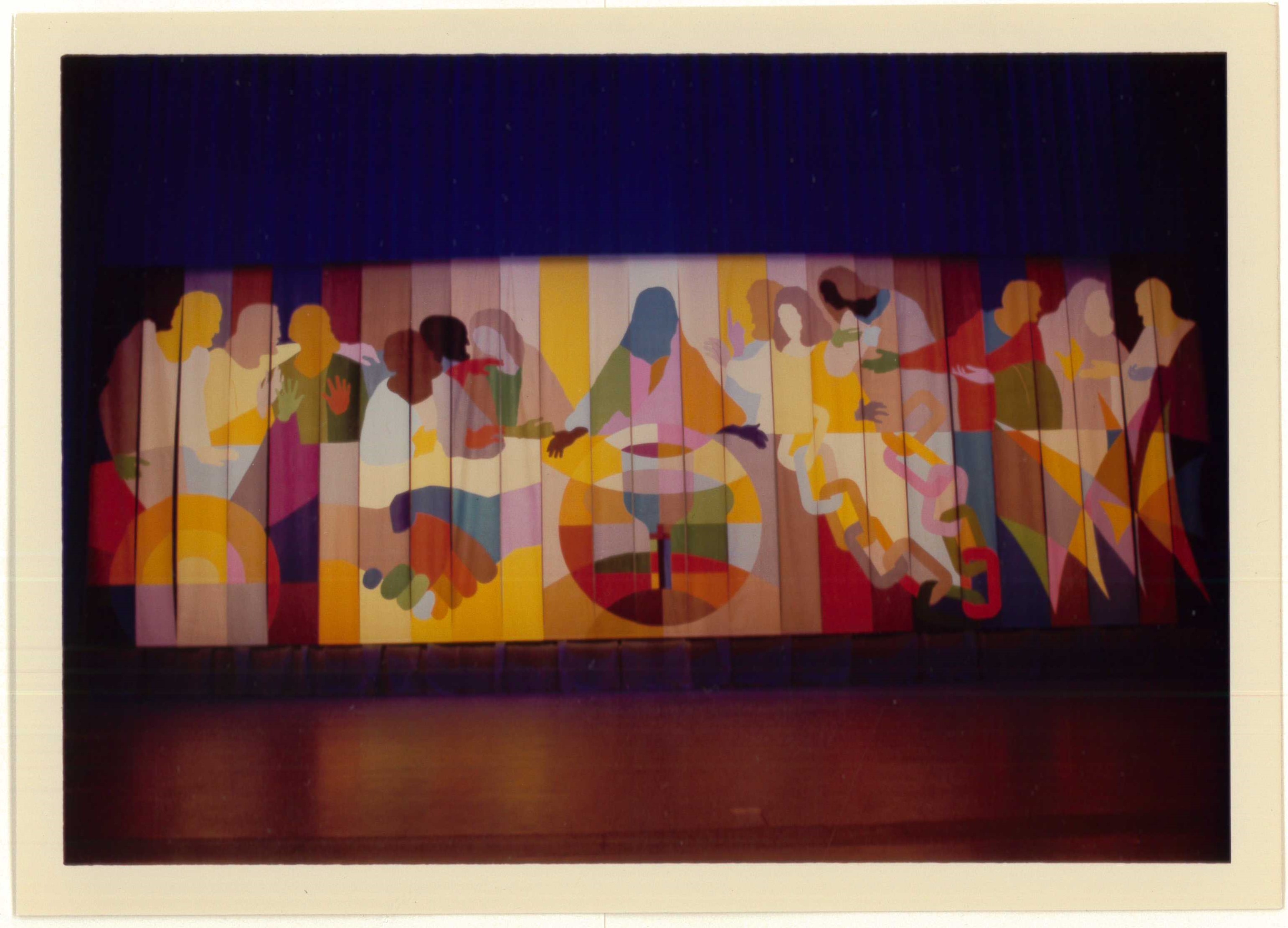 She reminds the audience of the liberatory call of the Gospel, of Jesus in the temple from the book of Isaiah, declaring freedom for the captive. She admonishes the crowd, "To know and try is not enough. To know and try might be good and nice. But we must be of a critical mind. And we must be visible signs of God's presence today."

Before reminding the audience of the 50,000 people murdered in El Salvador by military and paramilitary groups, of the 5,000 families with disappeared loved ones, of the assassination of Romero as he gave communion, Benavides locates the root cause of the bloodshed in the economic conditions of the country.

"Our main products, not by the choice of the people, are coffee, sugar and cotton. My country is in the hunger belt, according to the United Nations. Yet we have some of the richest people in the continent. You see, 2% of the Salvadoran people control 50% of the best land. They decide to grow the coffee, sugar, and cotton, which are world commodities. And they control close to two thirds of the national income. Through this, they control businesses and factories. The banks and the government and the life of the people."

She tells the audience that it's their tax dollars at work supplying paramilitary death squads and the Salvadoran air force, "[The] number of government craft is set to double in a year. We must recognize that this is a visible sign of death and oppression. The fire of the Pharaoh attacking by air with the Air Force," and urges them to support the regional diplomatic efforts known as the Contadora process. Benavides closes by relating the struggle of the Salvadoran people to liberatory struggles elsewhere:

"I beg you. I challenge you. I demand of you to join us in Central America, in South Africa, in Palestine, in the Bronx, to proclaim the time of Jubilee." 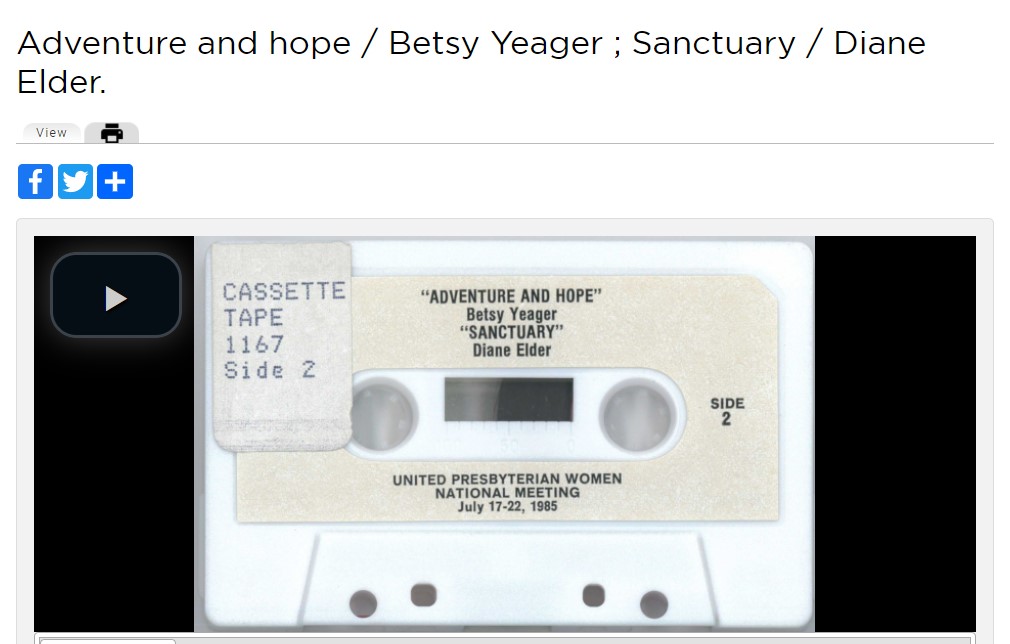 Listen to Betsy Yeager and Diane Elder in Pearl.

Diane Elder, before beginning her address, notes that flashbulbs are going off in the audience. Cameras had been prohibited, owing to the presence of at least one young woman, Ana from El Salvador, under care of a sanctuary church. Elder, for her part, welcomes even the spies in the crowd, invoking the government surveillance of sanctuary activists in Tucson:

"I'm a little concerned that we had to ask twice that pictures not be taken. And it reminds me of a trial that's going on in Phoenix because a couple of people went to a meeting of church, people like you and I, for some misplaced motives. It makes me wonder if there aren't one or two people here with misplaced motives. And if there are, I welcome you in the name of peace, and I ask you to open your hearts to the healing power of this community of women."

Diane's story is about her family's work with Casa Oscar Romero, a temporary way station for Central American migrants in San Antonio, Texas. Her husband Jack, during the summer of 1985, was serving a five month sentence on a variety of charges related to transporting migrants.

"Just exactly what are the risks? They can be quite a few. Loss of privacy. Legal entanglement. Illegal harassment. And the ultimate risk of jail. My family and I have faced that ultimate risk. But unlike our sisters and brothers in Central America, we North Americans face that risk in relative physical safety. And amidst a mountain of support from friends and strangers alike."

Elder offers a potent reminder to the audience of 1985, and that of 2021, of the relative security they and we enjoy -- that even the costs of discipleship they might bear in undertaking sanctuary are little compared to the suffering of their neighbors.

Looking at the sanctuary movement, 1985