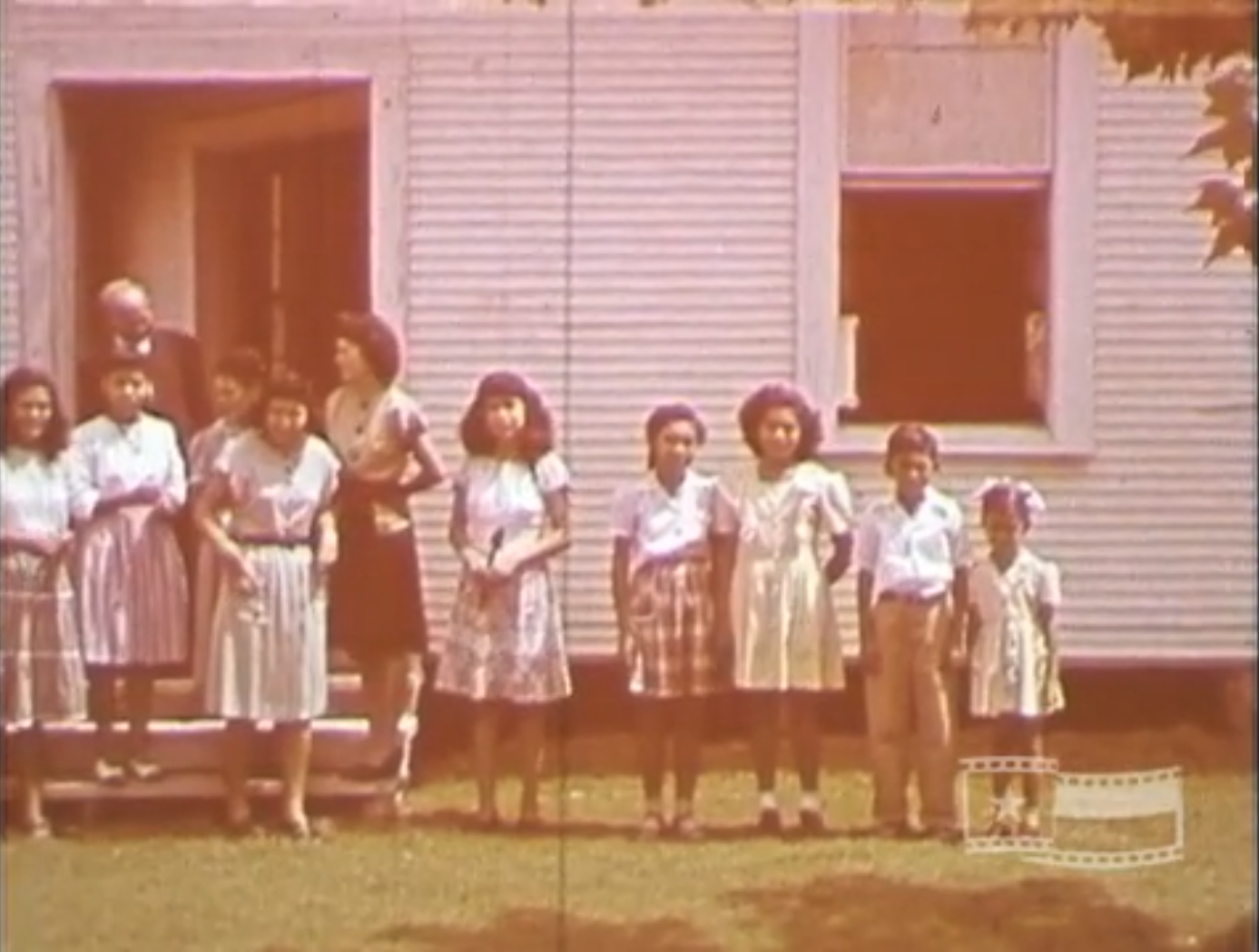 Still from a film featuring Texas-Mexican Presbytery's churches in central and east Texas in the 1940s. Courtesy of Texas Archive of the Moving Image. Source

This is the second blog in a two-part series of the Presbyterian Church in the United States’ Texas-Mexican Presbytery (1908-1960). Click here to read the first installment, where we discuss the fractured leadership and financial struggles of the Presbytery.

Besides financial troubles, the Presbytery faced other hurdles in achieving the goals outlined in the 1907 petition to create a Mexican Presbytery. The development of an informed ministry was a challenge without the availability of training materials in Spanish, and the opportunities for a well-rounded, formal education taught by qualified teachers never quite materialized. Traditionally, the church appointed ministers only after formal schooling and exams, but even Scott, an early leader in the Presbytery, was not college-educated. These unusual standards for ordaining ministers carried over to the rest of the Presbytery, where Mexican ministers were frequently excused from exams and had fewer years of schooling than their Anglo counterparts.

When a program was conceptualized in partnership with Austin Theological Seminary to establish a Spanish Department, religious educator James W. Skinner stated: “I am fully persuaded that this training work in Texas should be largely if not exclusively (I think the latter) in the hands of the Americans. If any Mexican is entrusted with this training responsibility then he should certainly be American born and American trained. I have reached this very definite conclusion after a variety of experiences with Mexican men as helpers.” 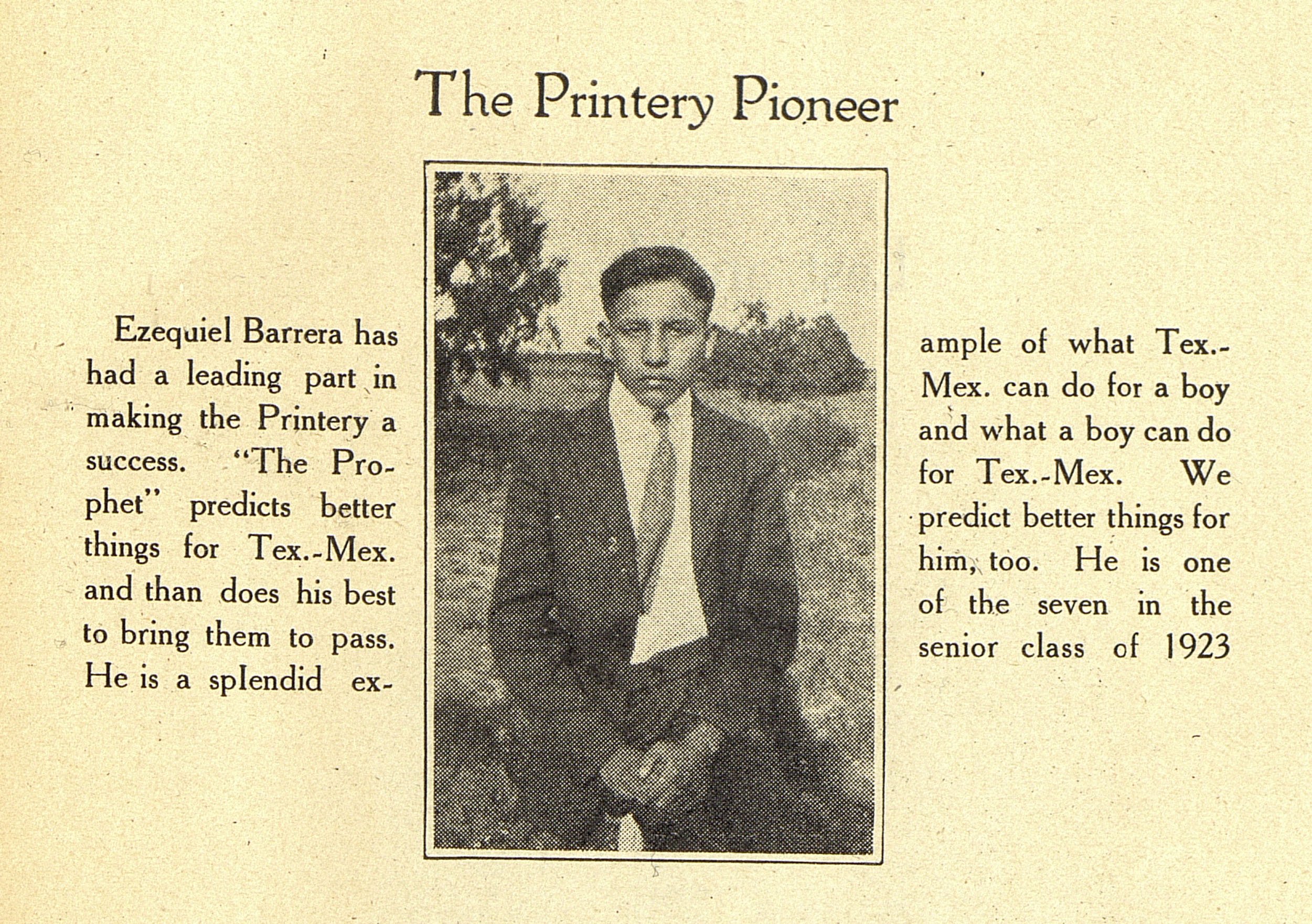 A student from Texas-Mexican Industrial Institute who worked at the school's printshop, where key Spanish-language learning materials would be printed for ministerial education.

While students of the Spanish Department now had access to the theological and intellectual community of the Seminary and University of Texas, they still had to contend with a scarcity of Spanish-language textbooks. Students learned only a narrow range of views, and they learned from culturally irrelevant materials. Consider this advice on suggested resources: “A revolving bookcase should be at his right hand. And in this bookcase should be the most commonly needed helps for daily use : his lexicons, English, Latin, Greek and Hebrew ; a concordance ; a Bible dictionary ; and a thesaurus of English words. Here also he must have a volume of some one or more of his favourite authors—Browning, Mrs. Browning, Tennyson, Carlyle, Emerson, Whittier, Mark Twain, Wordsworth—to turn to when the mood is on…” (Herrick Johnson, The Ideal Ministry, 1908). Further evidence of the substandard quality of their education was the fact that the program could, at most, enroll five students a year, or the maximum number of incoming ministers that the Presbytery had sufficient funds to employ – as they were not likely to find work elsewhere. 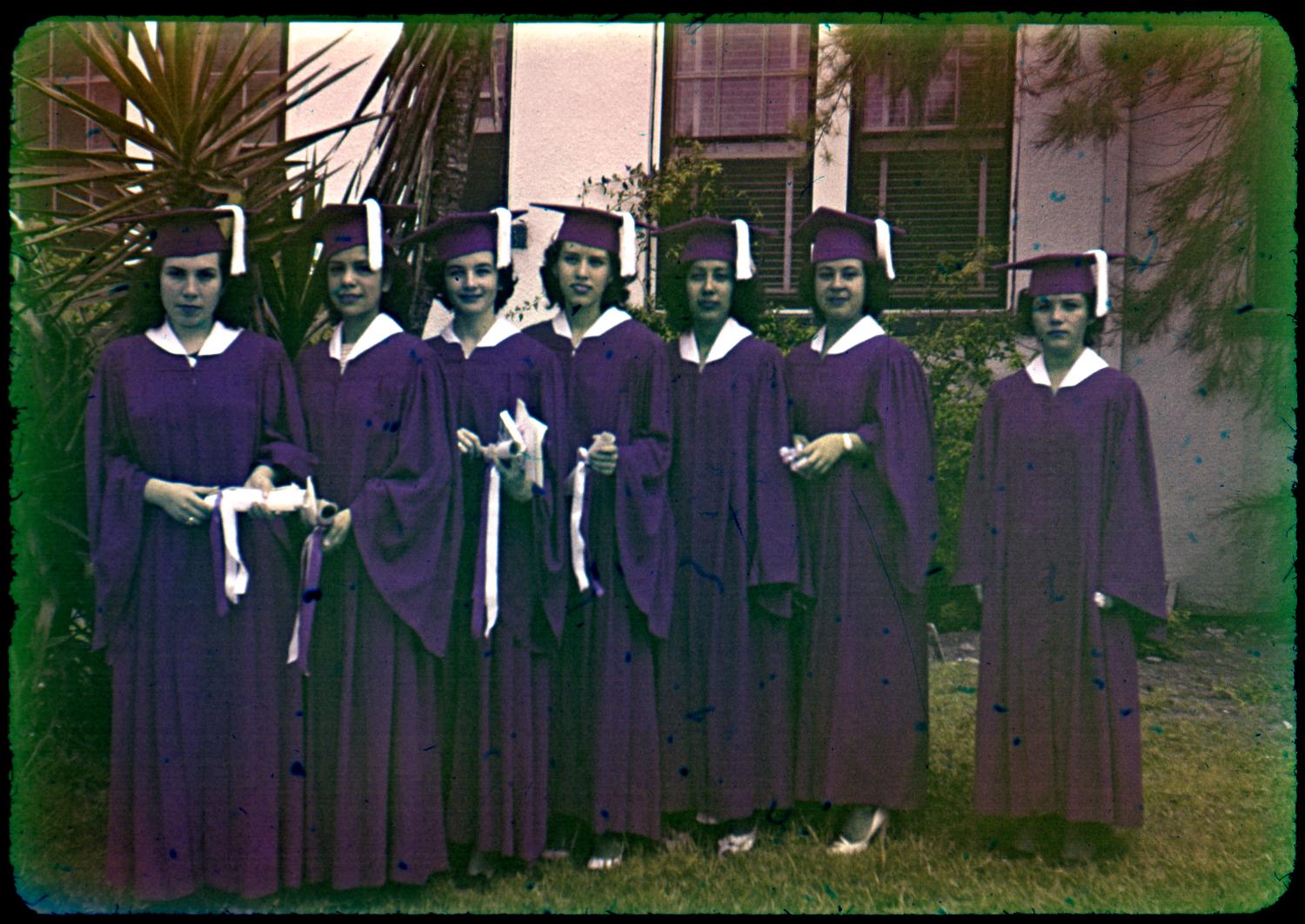 A 1950 group of graduates from the Presbyterian School for Mexican Girls, or Pres-Mex. Courtesy of the Austin Presbyterian Theological Seminary. Source

Other educational programs, ones which were far more successful, were the Texas-Mexican Industrial Institute in Kingsville, Texas, and the Presbyterian School for Mexican Girls in Taft, Texas. The boys’ school, known as “Tex-Mex,” was established in 1912 and resulted in the development of “200 acres of farmland, a dairy, gardens, a citrus orchard, and raised poultry, beef cattle, and hogs” along with a renowned printshop and vocational programs. Due to the successes of the boys’ school, a girls’ school, known as “Pres-Mex” was formed in 1924 following the same model. The schools merged in 1956 to become the Presbyterian Pan American School, still in operation today.

By the 1940s, the financial situation had worsened to the point that churches were now relying on generous “joy gifts” offered by the General Assembly’s Committee on Christian Education and Ministerial Relief. The Synod of Texas assembled several Ad Interim Committees to determine how to salvage Texas-Mexican Presbytery, the first of which resulted in the establishment of new roles and departments, including The Secretary of Latin-American Work and the Synod’s Sub-Committee of Latin-American Work. A second committee, in 1949, concluded that the Presbytery was not ready to become financially independent. At this point, integration was a growing topic, though there was still major pushback against the idea.

A third committee was formed to carefully assess the situation. Sherwood H. Reisner, a former missionary and a pastor in Falfurrias, Texas, led the research project and submitted a detailed report in 1951. It noted the extreme demands on ministers, their workload often including clerical and even janitorial tasks. Their parishioners called upon them at all hours, requesting support for “almost any conceivable reason.” Church leadership was strict and unyielding, to the point of stifling innovation for church programs, and members were severely disciplined. 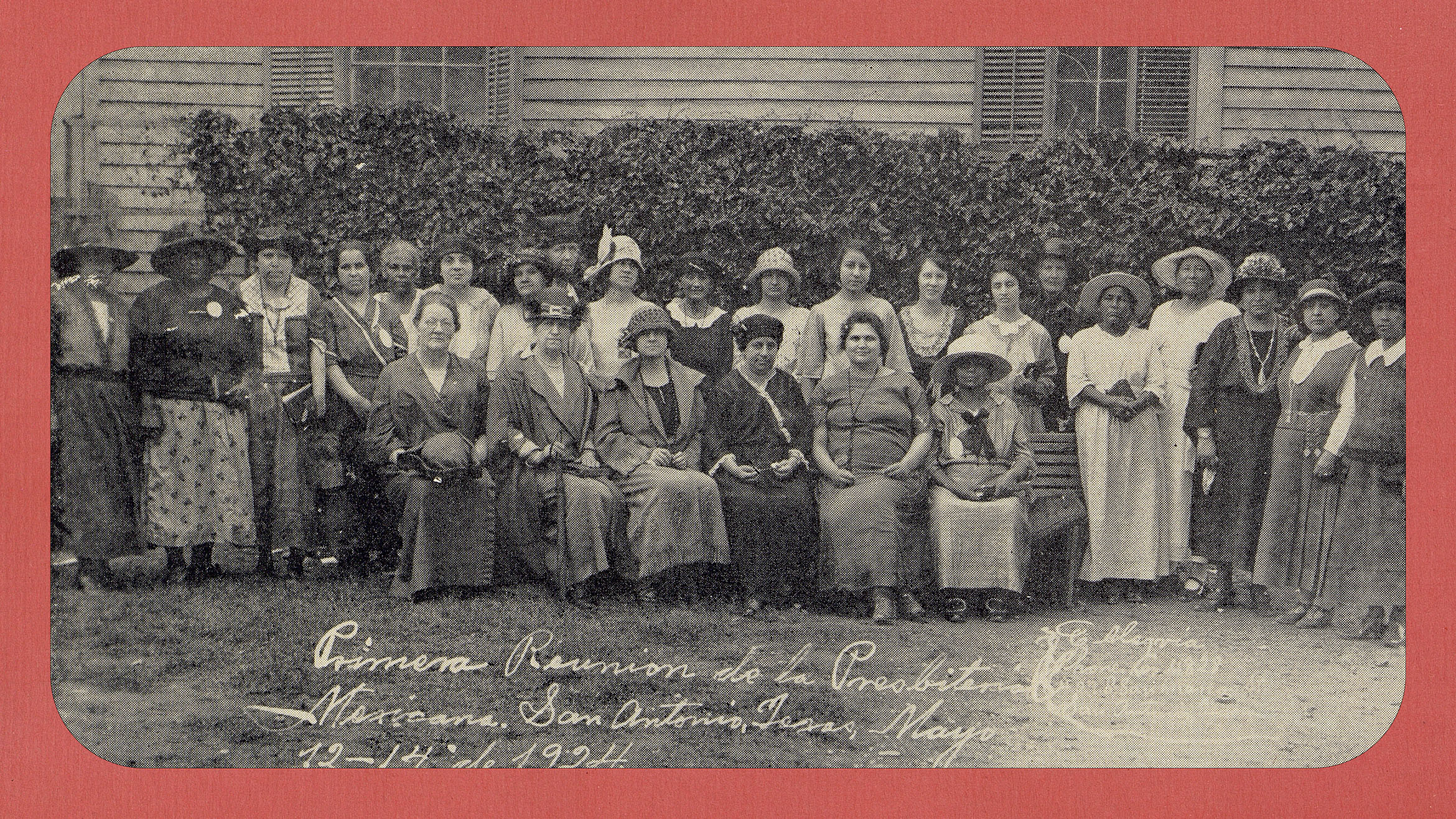 The report also noted the cultural differences threatening the development of Mexican Presbyterians, decrying the Roman Catholic heritage embraced by Mexican populations, characterized as “a religious tradition which has enslaved their religious affections by a diet of ritualism and idolatry.” Not addressed in the report is the cultural divide that resulted from pitting the Roman Catholic heritage against the pseudo-Puritanical moral codes upheld by Tex-Mex churches. Ruben Armendáriz, director of the Hispanic-American Institute in Austin, Texas, recalls the differences in how his Protestant family regarded Catholic families in a 1975 interview, available for listening through Pearl.

Overall, the Reisner report included a perceptive summary of the root causes of the failures of the Presbytery. Referencing the long-term salary subsidy supporting the churches, Reisner claimed that the fault for the state of the churches “is to be laid the Synod’s door, for a mistake policy of paternalism by default, and for a lack of a determined and aggressive strategy for self-support and outreach to new fields.” The method of assigning evangelists rather than pastors was to be halted immediately (on this point, Tex-Mex contended that there was a long history of ordaining evangelists, citing Scott, an early leader of the Presbytery). Though integration was inevitable, Tex-Mex ministers viewed it as a form of punishment for the perceived failure of the Presbytery. This waiting period was one of major tension and distrust within the judicatory.

Worn down by years of long meetings and arguments with no satisfactory progress, eight ministers and seven elders submitted a request to the Synod in 1954 to begin the process of integration. The Presbytery came to a close in 1955, and a period of integration commenced. During this time, the Mexican churches became extremely isolated, having no relationship with the Anglo churches. Any communication between them revealed condescension from the Anglos towards the Mexican churches, considering them “only as a mission—another item in the benevolence budget.”

Overall, the authors outline the efforts of the Committee as resulting in “a great deal of rhetoric and only a modicum of achievement.” The tangible outcomes included much-needed additions to church infrastructure, resulting in building projects in nine cities. An annual conference for Latin American ministers was established in 1960, to be held on the campus of the Pan American school in Kingsville. Lastly, and most significantly, the Committee’s efforts resulted in the publication of a Spanish edition of the Covenant Life Curriculum, a series of learning materials. These volumes were the first Spanish-language teaching literature produced by the PCUS, which “indicated a willingness on the part of the synod to accept the reality of a truly bilingual constituency within its own fellowship.”

Even after these efforts, many doubts and questions remained. Focused development was still needed to preserve and empower the Mexican churches, and whether or not preconceptions of the Mexican congregations could change remained to be seen. There was hope that a new wave of leadership would prompt the necessary change.

Listen to the 1975 interview with Ruben Armendáriz, director of the Hispanic-American Institute in Austin, Texas. Armendáriz describes the anti-Catholic sentiment in Mexican Presbyterian spaces stemming from the missionary enterprise and the divisions it created in the Mexican American community.

Texas Archive of the Moving Image