Oral History, Then And Now 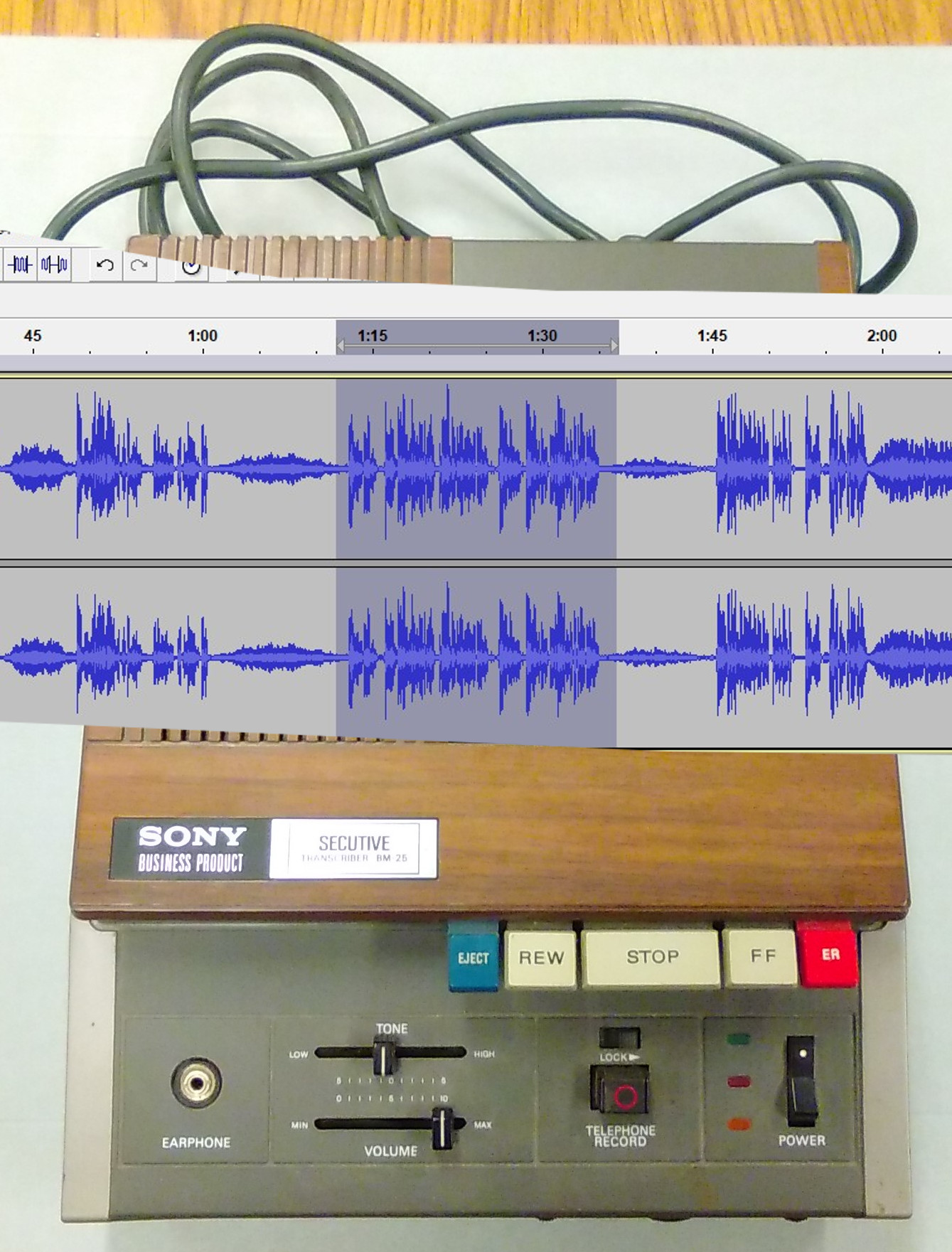 Over the course of the 1980s, a dedicated group of Presbyterian Historical Society volunteers--including former PHS Board member Bill Marshall--spread out across the country to gather the testimonies of significant Presbyterians. Among these noteworthy Presbyterians were missionaries, former prisoners of war, and the first generation of ordained women. The ways we collect oral histories forty-plus years later have changed, but the reasons for doing them—to gather voices that guide readers through the historic record, to bridge gaps in our understanding—remain the same.

The 1970s was a period of relative ferment in archivism, with the growth of labor archives, women’s archives, Black archives, and urban archives, as well as the increased production of subject-based guides to collections. Coordinate with this flowering of documentation of American social movements was the rapid evolution of a killer app for mobile audio recording: the audio cassette.

By about 1965, open-reel tape recorders had become extremely portable. Though the sound quality of open-reel tape would keep the format in use until the 1980s, it had its drawbacks—especially for the amateur oral historian. The three-inch reels typically used in the very smallest recorders had short runtimes, about 15 minutes at 3-3/4 inches of tape per second. You could double this time by recording at 1-7/8 ips, but with lower fidelity. The self-contained compact cassette created by Philips in the 1960s enabled users to record double the length—half an hour on each side—on smaller devices, and without the potential hassle of a rapidly unspooling reel. 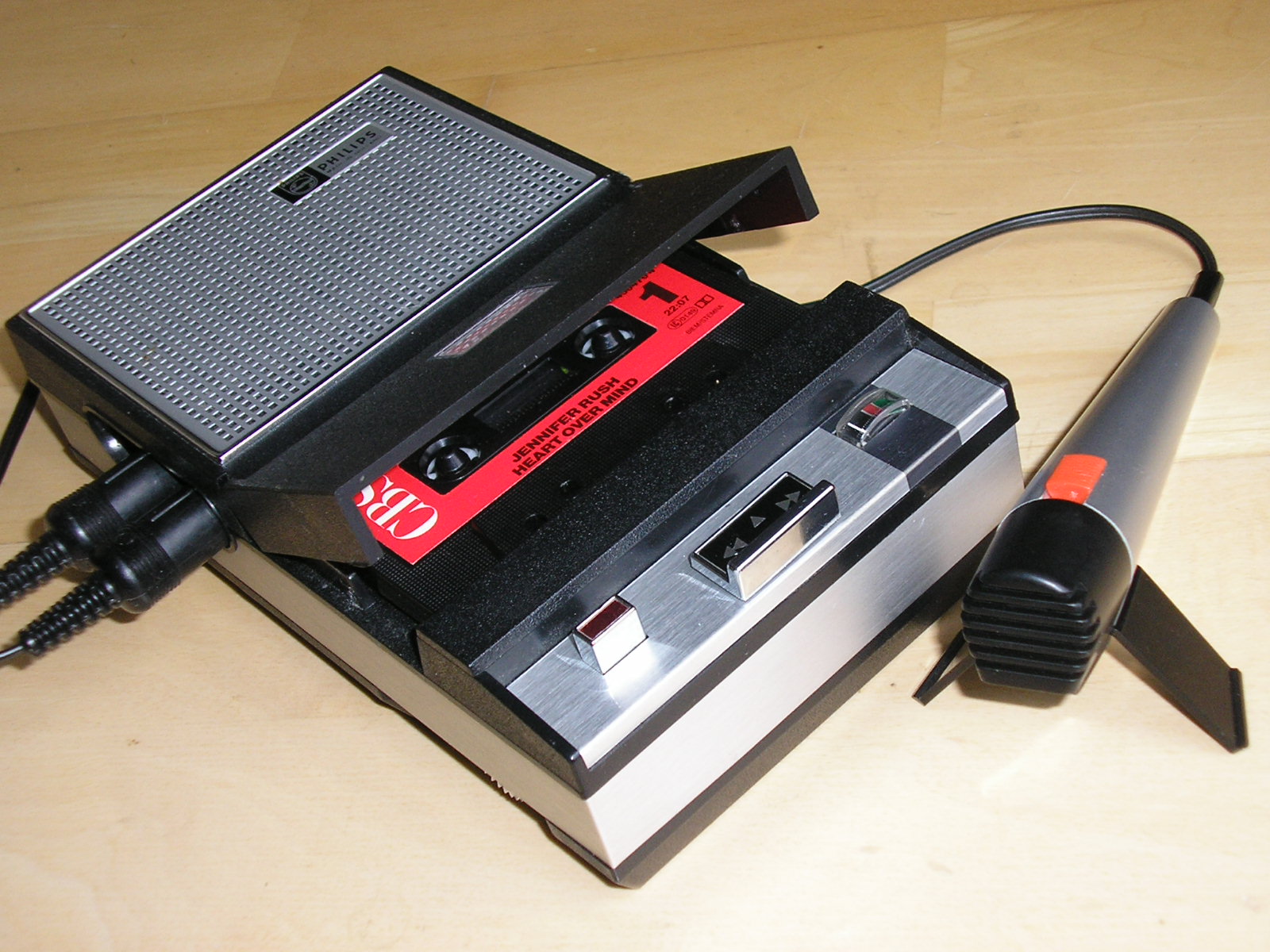 Among the audio cassettes we've preserved is a 1979 recording of Trinity University's Lois Boyd leading a seminar for PHS's Oral History Committee. Much of our oral history collection bears the names of Lois and her collaborator R. Douglas Brackenridge, and this seminar may represent the start of their work for PHS. Lois speaks of oral history as a means of creating inclusivity: "we want information from the captains and the kings and the privates and the lieutenants." The event brought Board members together with ministers like Cape Fear Presbytery's James Enoch Kearney, and Watsonville, California's Sumio Koga

Over the course of the late 1970s and 1980s people familiar with PHS produced thousands of hours of recorded testimonies. These included an early-career Katie Geneva Cannon reflecting on growing up inside Catawba Presbytery: 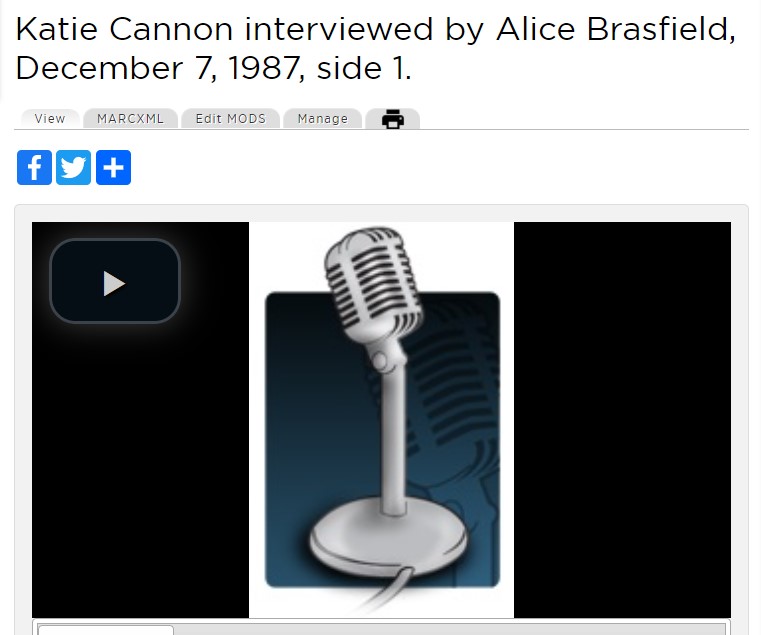 A late-career Walter Soboleff reflecting on Memorial Presbyterian Church in Juneau, the "Church of All Nations": 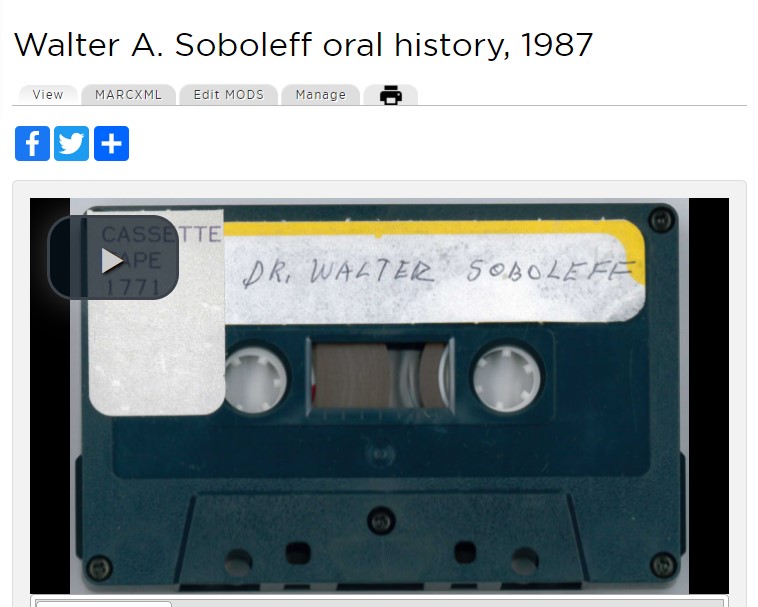 And Eugene Carson Blake recounting that he was recruited by the CIA to spy on his Russian Orthodox peers during a trip to Moscow: 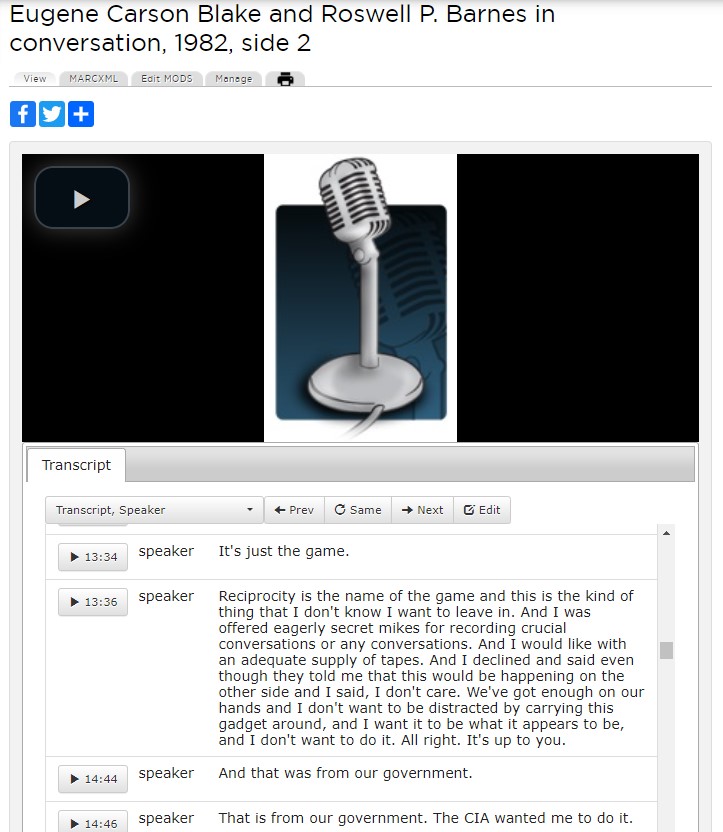 Audiences of 2022 might assume that the intended product of an oral history interview would have been the recorded sound itself. While it's true that we would copy cassettes for researchers, the real product was the transcript. Transcripts were typewritten and edited by hand, usually by volunteers. We still have the American Association for State and Local History's 1977 guide, which includes a small flexidisc record with a voice actor performing the worst possible oral history, intended to guide the user in the nuances of making a legible, rather than a verbatim transcript.

PHS adopted machine transcription relatively early, subscribing to the tech startup Pop-Up Archive in 2014. This was an online, open-source speech to text software, ultimately marketed toward podcast producers, that Apple bought out in 2017. The early products of this kind of software weren't terribly reliable. The most readily available text corpus for human speech online was Rapgenius (now just Genius), and early machine transcripts reflected that. Accordingly, the machines required a lot of intervention to edit. 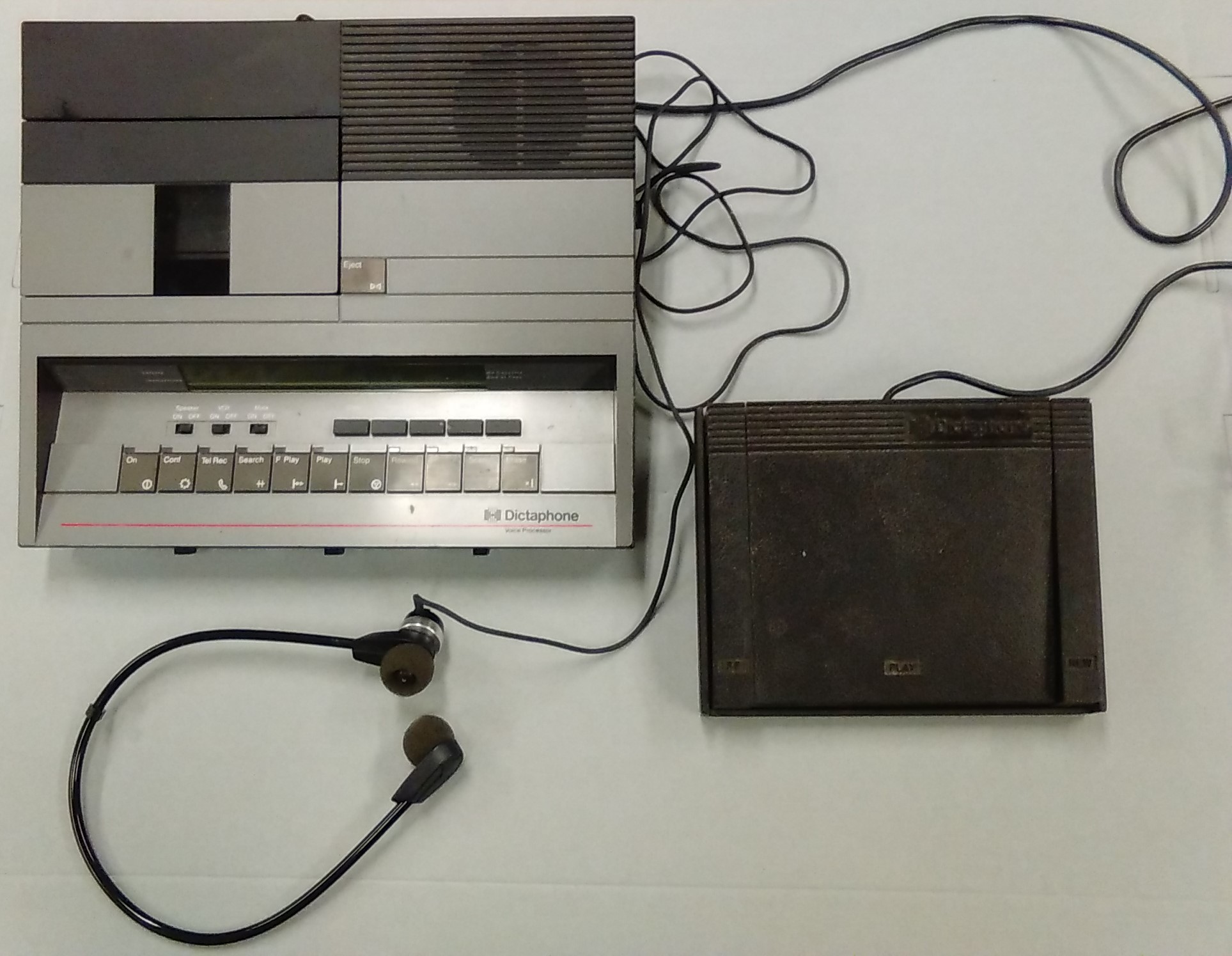 A 1980s Dictaphone, with pedal for controlling playback speed, from PHS holdings.

What's remarkable about the old platform (and the new one we use) is that annotations of audio are recursive. They get fed back into the speech recognition engine, so that the more edits users contribute, the more accurate machine transcription gets. So, when we took Eugene Carson Blake's eulogy for John F. Kennedy and corrected "make it bun dem lyrics" to "make it abundantly clear," that edit joined hundreds of thousands of other edits, making a new text corpus for the engine to use.

The explosion of the podcast-industrial complex in the past five or so years has accordingly made some machine transcripts very reliable. In our experience, however, machine transcripts of English speakers from outside the white, studio broadcast norm have poorer fidelity. With additional digitization and annotation, hopefully we can contribute to making machines that properly represent the whole panoply of speakers.

Oral history interviews remain an important tactic for our collection development and have arguably become more important to us over the course of the COVID-19 pandemic. Widespread comfort with videoconferencing has shortened the distance between us and prominent servants of the church, allowing us to start a conversation about an individual's personal papers, for example, by taking their testimony first. Oral history remains a significant means of expanding our reach and building a more just and inclusive archives.