Robert A. Elwood's Call to Violence 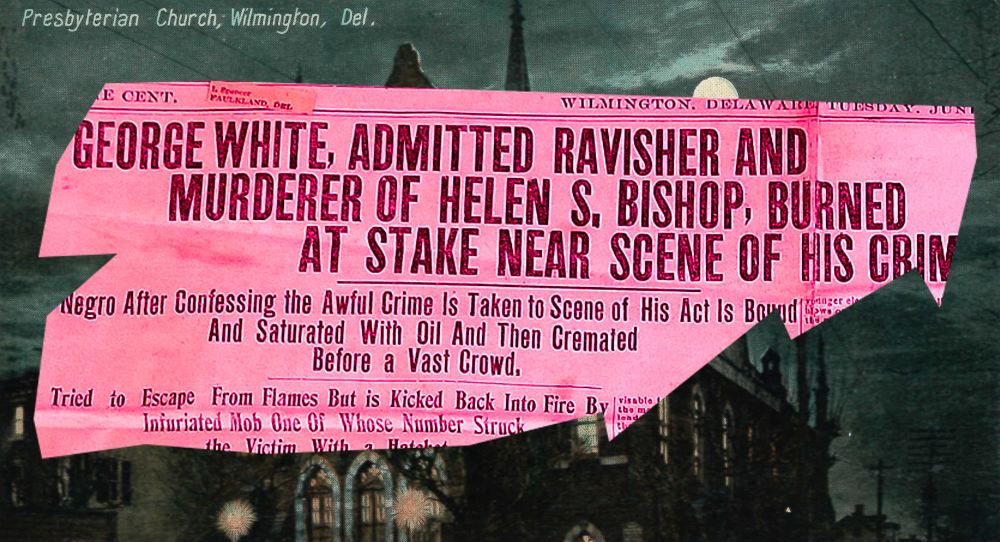 Newspapers advertised the sermon to be delivered June 21, 1903, a Sunday evening. Crowds gathered outside Olivet Presbyterian Church in Wilmington, Delaware, to hear Robert A. Elwood warm to his theme, "Should the murderer of Helen Bishop be lynched?"

On June 16, seventeen year old Bishop had been assaulted on a rural roadside near Price's Corner; she died of a neck wound the next day. Late on the 17th a local Black farm worker, George White, was arrested for the murder. Police allegedly found a bloody knife in his possession. There were no eyewitnesses to the attack. 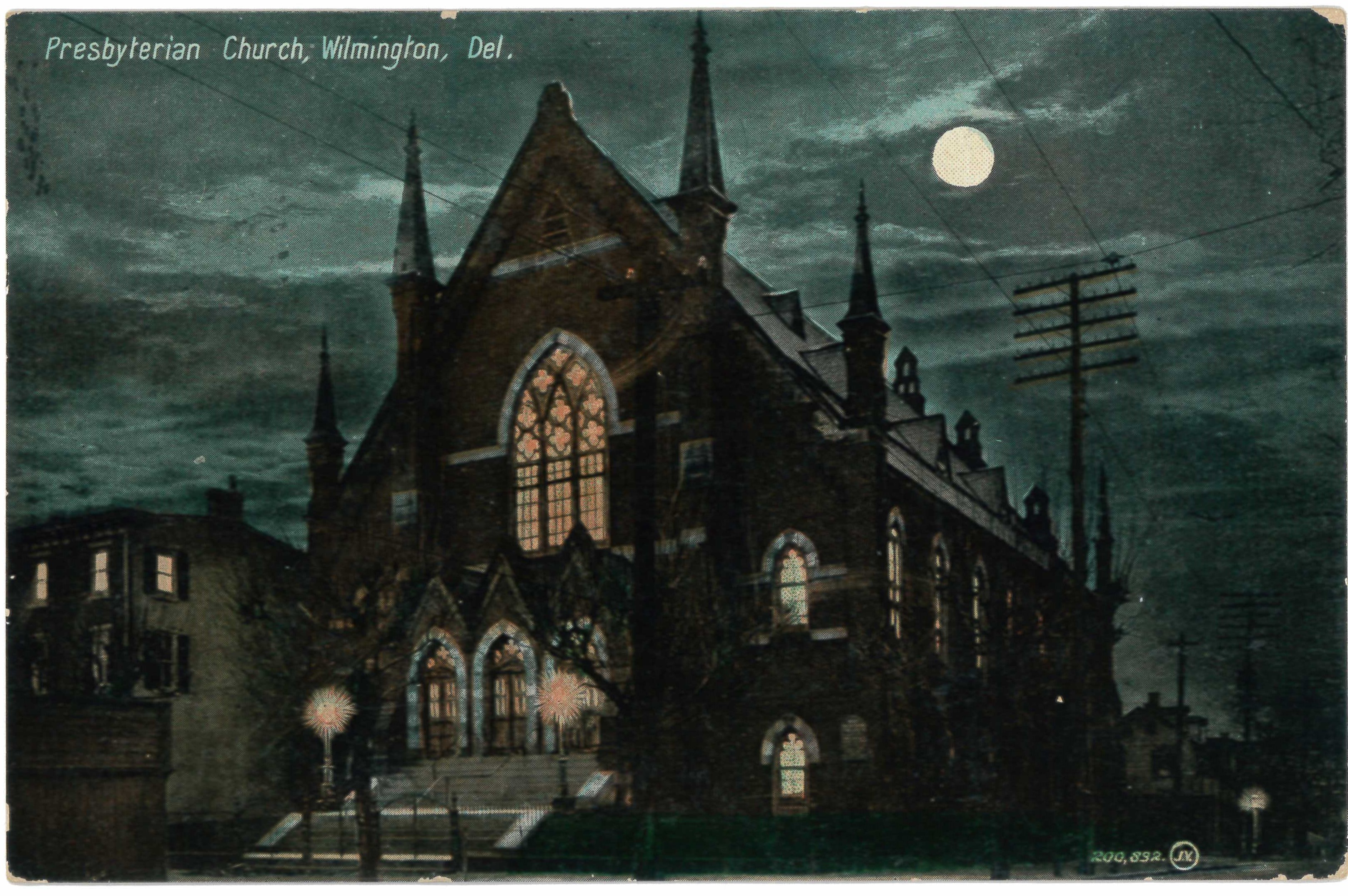 Before three thousand people gathered at Fourth and Broome streets, Elwood preached a cruel mockery of the constitutional rights of the accused, saying that by delaying White's trial until September, civil authorities were depriving the community and the accused of the satisfaction of a speedy trial . He then whipped the crowd into a frenzy, invoking the mythic predatory alterity of Black men:

"Who did this," Elwood thundered at the crowd, "Was it a wild beast loose from its captors and found an easy prey? Was it an imp of hell, taking vengeance on a defenceless human? No, but it was a man with the heart of a beast, with the desires of a fiend, who gave vent to the bestiality and executed this damnable crime."

Then, theatrically waving what was purported to be a handful of bloody leaves taken from the scene of the crime, Elwood addressed the judges of Delaware's criminal court: "I appeal to you, yea rather, let this blood of the fair young girl so cruelly outraged and murdered be its own appeal to you to reverse your opinion and to give a speedy trial to the accused, that her memory may be honored, that justice may be satisfied, and that the women of our State may be given protection!"

Elwood had a peripatetic career, markedly hunting for notoriety, while doing virtually no labor that would merit it. Graduate of a barely-constructed college in Ohio, he spent one year at Princeton Seminary before tanking out in 1897. Returning from a stint as an irregular soldier in the 1898 American war in Cuba and Puerto Rico, he unsuccessfully petitioned Philadelphia Presbytery to ordain him. He was ordained in 1899 by the Presbytery of West Jersey, and served little more than a year at Absecon Presbyterian Church, before decamping to Wilmington.

Outside of Olivet, Elwood carefully laid blame for any potential violence at the hands of civil authorities, for not bending to the will of the white mob. "If you do not heed these appeals and that prisoner should be taken out and lynched, then let me say to you with a full realization of the responsibility of my words, even as Nathan said to King David of old, after his soldiers had killed Uriah, 'Thou are the man!' So I would say to you, 'The responsibility for lynching would be yours for delaying the execution of the law."

The mob laid plans, and on Monday posted invitations to the lynching, to be held at Price's Corner. Men overwhelmed the guard of the Wilmington workhouse, a teenage boy was killed in the melee, and the crowd emerged with George White in tow. Streetcars brought a large crowd of onlookers to the site, where, after confessing to the crime with the hope of receiving leniency, George White was burned at the stake. Reportedly, members of the mob waited hours for the coals to cool, before looting the corpse for its remains.

In October of 1903 the Synod of Baltimore directed New Castle Presbytery to investigate Elwood. Presbytery assigned that work to a committee, which reported in November, issuing a majority and minority report, condemning Elwood for "unscriptural and pernicious" justification of lynching, but stepping away from a formal trial. Elwood, out of hubris, then addressed the presbytery, recanting nothing, and demanded a full trial by the presbytery. In 1904, presbytery's court would convict Elwood of preaching "contrary to the known principles of Christianty" and of directly endorsing and advocating lynching. Punishment was briefly deliberated on: 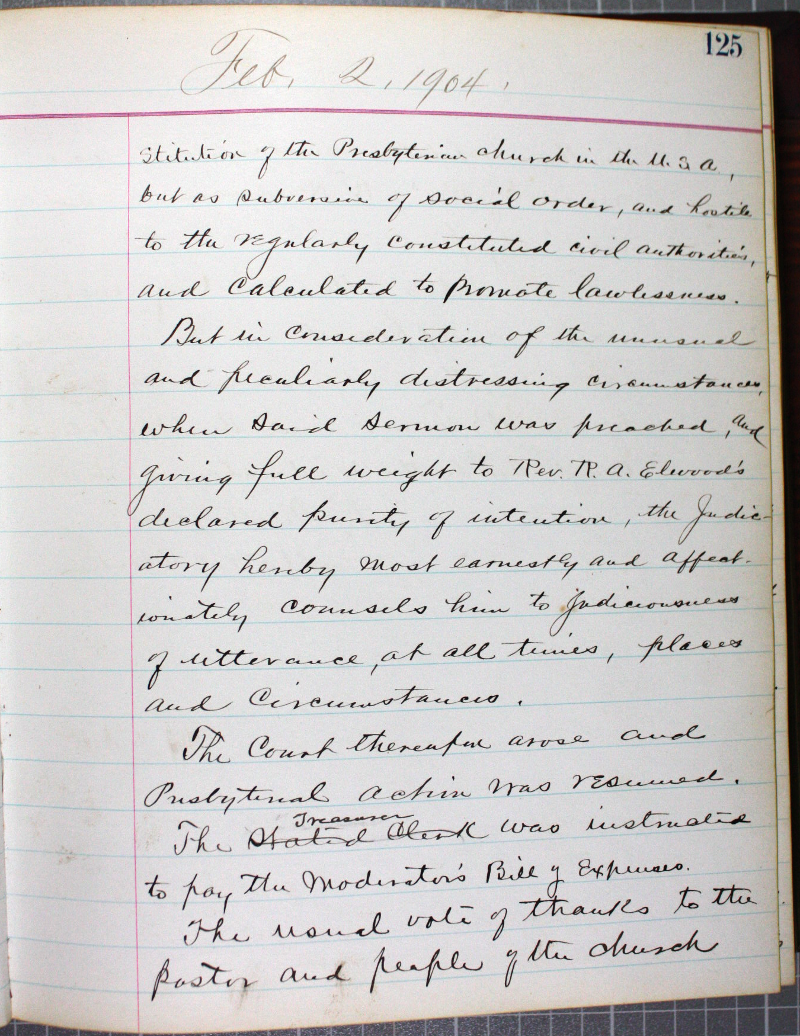 "But in consideration of the unusual and peculiarly distressing circumstances when said sermon was preached, and giving full weight to Rev. R. A. Elwood's declared purity of intention, the Judicatory hereby most earnestly and affectionately counsels him to Judiciousness of utterance, at all times, places and circumstances. The Court therefore arose and Presbyterial action was resumed."

New Castle Presbytery then paid their moderator's expenses, thanked their host church, and closed the meeting.

Elwood would eventually be drummed out of the presbytery for some other injudicious utterance, and joined First Presbyterian Church, Leavenworth, Kansas, serving as its pastor until 1908. One source holds that he was convicted of "seduction" and resigned. He returned to Absecon, and went on to thrive as a conservative firebrand preacher in Atlantic City's Boardwalk Church.

Today, the presbytery reflects on this history with anguish: "We look in horror upon the history of lynching in this country, with particular shame upon a story of a Presbyterian pastor inciting such a thing and the inadequacy of the presbytery’s response. An anemic response to deep pain can be as lamentable as mob violence."

Though the lynching of George White is the only officially recorded lynching in Delaware, historians aver that several other instances of racial terror in the 1860s qualify, and that the lack of scrutiny by the federal Board of Freedmen accounts for diminished documentation of lynchings. With the idea of fully accounting for racial violence in the state, in 2019 a number of institutions embarked on the initiative, Unequal Justice in Delaware.

Dennis B. Downey, The Lord's Messenger: Racial Lynching and the Church Trial of Robert Elwood (2001), Journal of Presbyterian History.