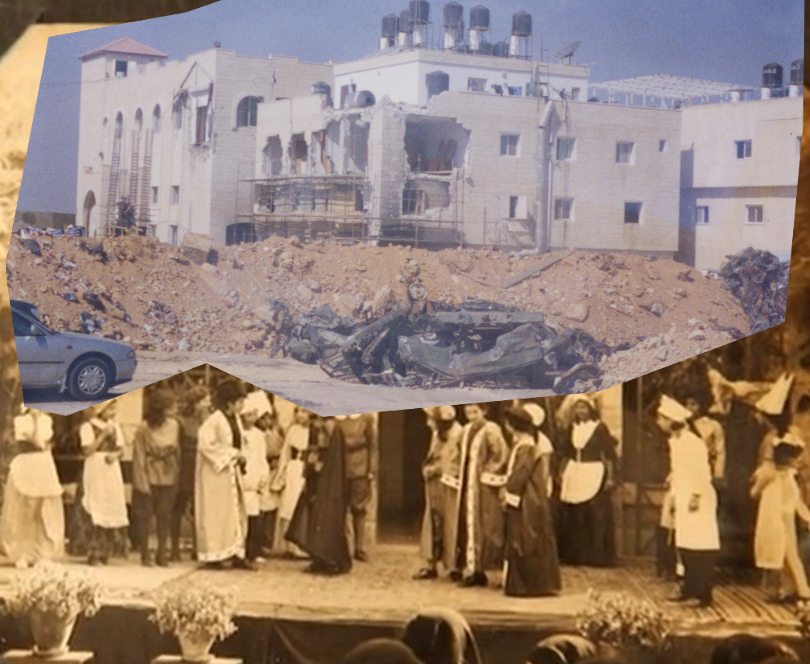 As Presbyterian leaders renew their calls for an end to Israeli depredations against Palestinians, in Gaza, in Silwan, in Sheikh Jarrah, and elsewhere, let's sketch a handful of details from the lives of Presbyterian mission workers, diplomats, agronomists, teachers, and spies.

In 1948, Presbyterian Syria Mission chair W. G. Greenslade served as the conduit for individual and institutional donations for the relief of Palestinian refugees, during the Nakba. On April 27, 1948 a reporter for Presbyterian Life asked him to comment on "what happens on May 15 when the British are scheduled to leave, the effect on local government in the villages of Palestine, the effect on normal trade activities."

Greenslade could be forgiven for replying curtly. The dispossession of Palestinians from within the British Mandate by roving bands of terrorists, styling themselves a liberating army, had been at a peak for seven months. Two weeks before Presbyterian Life wrote in, terrorists of the Irgun and Lehi murdered more than 100 Palestinian civilians at Deir Yassin. President Harry Truman, in part to curry favor with Jewish Americans prior to an upcoming election, would in May recognize the nascent State of Israel. Greenslade responded to the reporter:

"One is tempted to point out the extent to which the Arab side of the controversy has been neglected in American publicity. Americans in Lebanon and Syria find themselves greatly embarrassed by the shifting policy of our government. The hasty action of the President in recognizing the State of Israel while the whole question was before the United Nations is deeply resented and difficult to explain."

Alford Carleton, of the United Church of Christ, was dispatched that May to Damascus to "inform the Syrian government of his disapproval of the action of President Truman." Writing back to Greenslade, Carleton notes that he had predicted Jewish aggression in the area should the British Mandate fall: "Were the matter not too tragic for indulgence in such sport, all of us would gladly chorus, We told you so [...] The essentially fictitious nature of the Zionist claim to be in Palestine 'for the good of all' is now clearly demonstrated.

"The turning of the Zionist religious and cultural claim into a purely political or nationalist matter has implications far beyond the present conflict."

American Protestants did not start out their two-centuries' long relationship with the people of Palestine, Lebanon, and Syria from a position of care and respect. Levi Parsons and Pliny Fisk sailed for Jerusalem in late 1819, tasked by the American Board of Commissioners for Foreign Missions with evangelizing the Jewish population of Palestine and thereby bringing about the apocalypse and the end of time.

This is not an exaggeration. Shortly before embarking for Palestine, Levi Parsons delivered one of the earliest American Zionist sermons. For him, a ministry which dissolved the power of Islam and of the Ottoman Empire, and which resettled the Jews of Europe into Palestine, could not but bring about the millennium. "Beside, there still exists in the breast of every Jew an unconquerable desire to inhabit the land which was given to their Fathers; a desire, which even a conversion to Christianity does not eradicate. Destroy, then, the Ottoman Empire, and nothing but a miracle would prevent their immediate return from the four winds of heaven."

Driven out of Jerusalem by both civil and religious authorities, and suffering illness, the men decamped for Malta within two years. The Commissioners would re-establish a mission station in Beirut in 1833 -- the city’s status as the most important port in the Ottoman Empire, and its Christian majority population, made it the hub of mission activity in the whole Middle East through to 1984. Presbyterian mission work in Palestine would be second-hand -- directing funds through the Syria-Lebanon mission to ecumenical partners, or supporting the work of Presbyterian-founded schools. For example, the American University of Beirut's Village Welfare Project sent students to assist villagers near Jaffa and Ramallah during the Arab revolt in Palestine in 1939.

In the wake of the Nakba, Presbyterian mission workers' first task was to adequately represent what they saw to American audiences. The Christian Century was among the outlets that upheld the Zionist cause, and W. G. Greenslade in February 1949 writes to its editor to clarify matters. Christians of Nazareth supported the occupation, he writes, and "Arab tribes in more remote areas of Syria have asked to be incorporated into the Jewish state," and despite that support, were forcibly evacuated. He asks "What then was the main cause of the Arab exodus from Jewish-held Palesine in addition to the forced evacuations? The answer is terror." Prior to the Deir Yassin massacre, flight was "sporadic"; afterward it was wholesale. 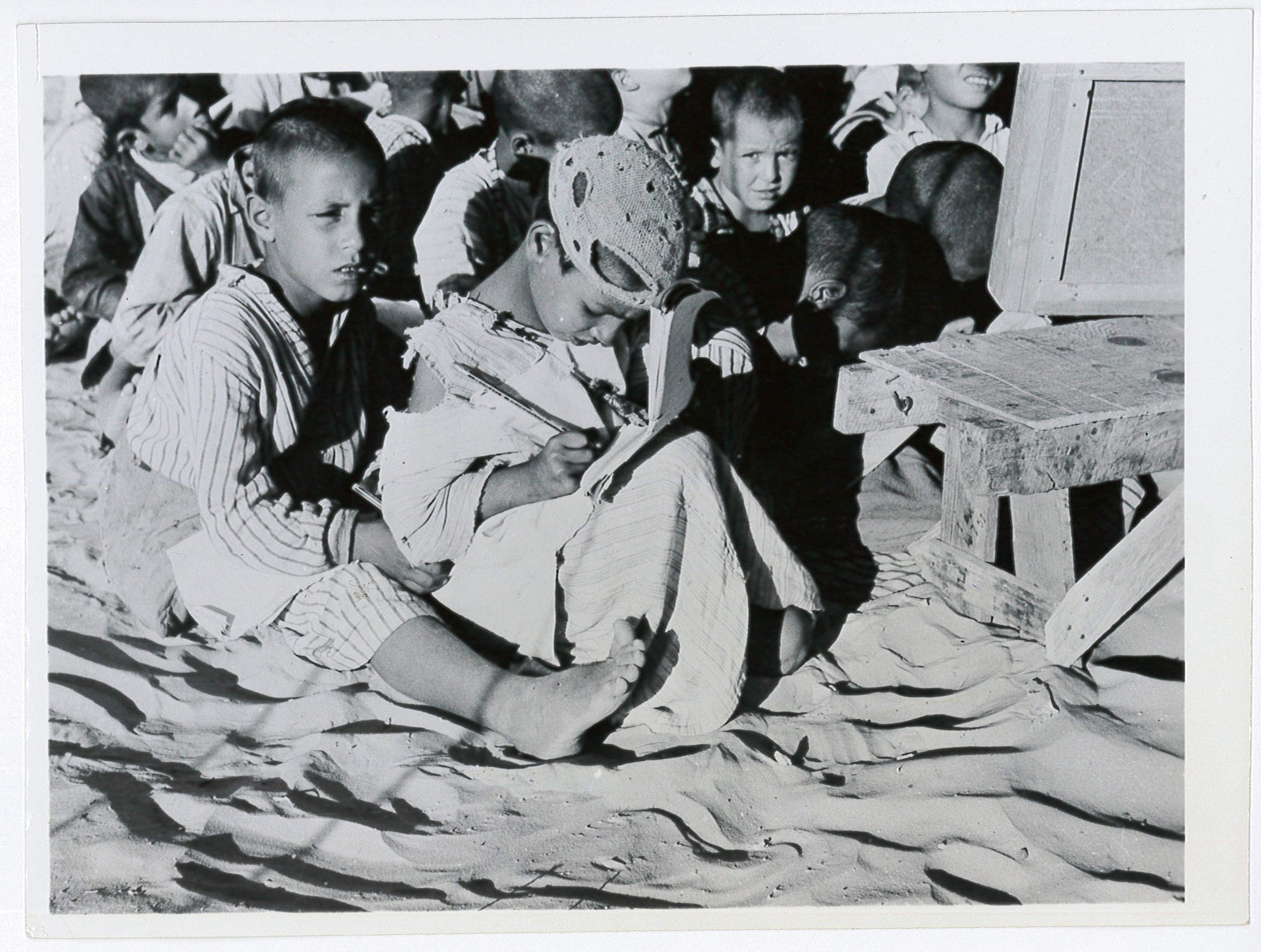 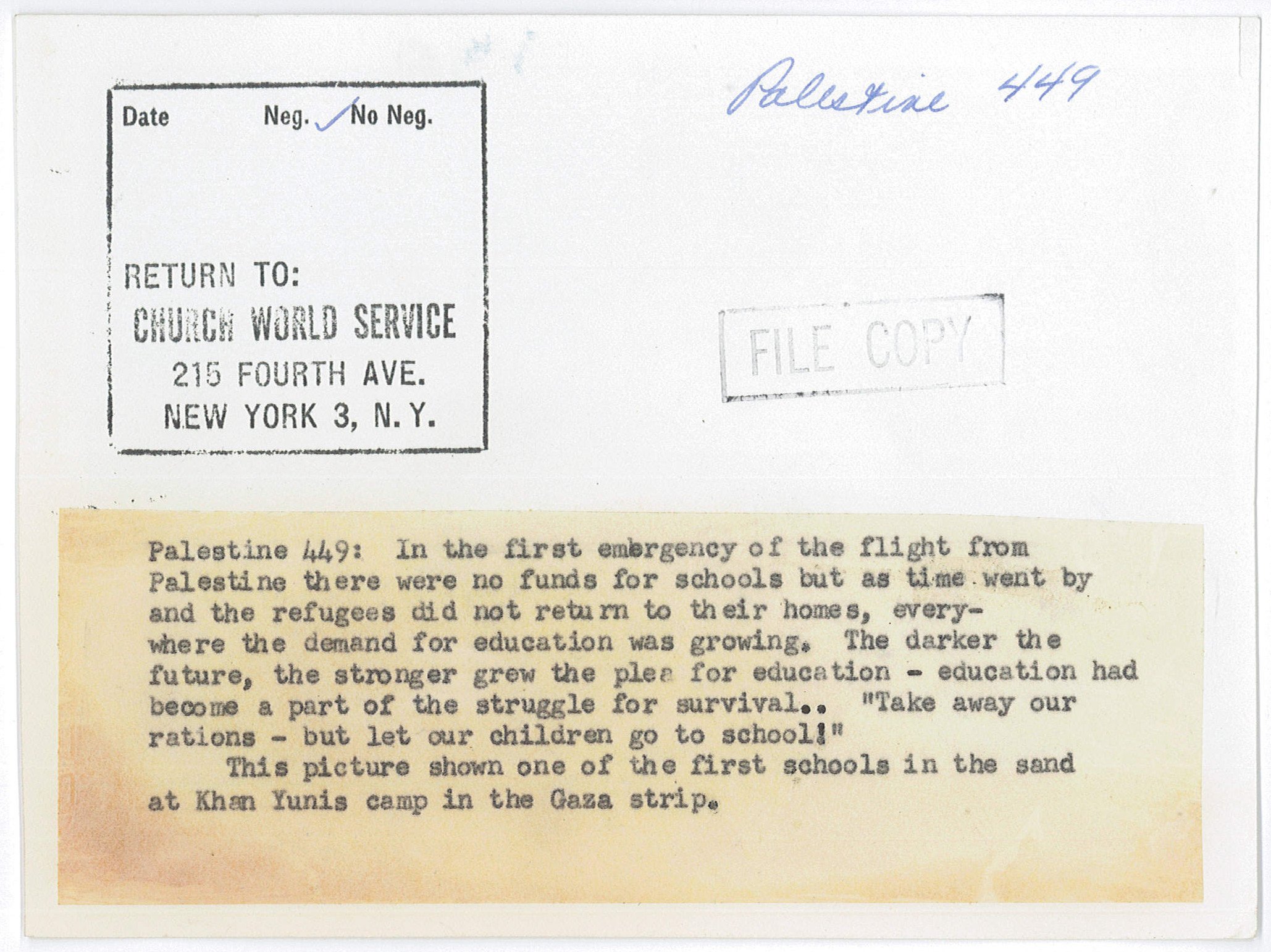 Presbyterians' second task was the aid and comfort of Palestinian refugees. Presbyterian mission co-workers opened facilities to the newly established United Nations Relief and Works Agency (UNRWA), housing Palestinian refugees at the mission camp at Ain al Hilweh, at Mieh Mieh, at the evangelical church in Irbid, Jordan, and elsewhere. Mieh Mieh at one point in 1952 sheltered 4,000 refugees, and housed a UNRWA clinic and hospital. Students from the Presbyterian Sidon Girls School routinely visited Mieh Mieh, delivering fruit to supplement children's rations and administering cod liver oil as a nutritional supplement. Anemia, rickets, tuberculosis, kidney and liver failure, and calcium and vitamin E deficiencies were endemic, especially among children in the camps. 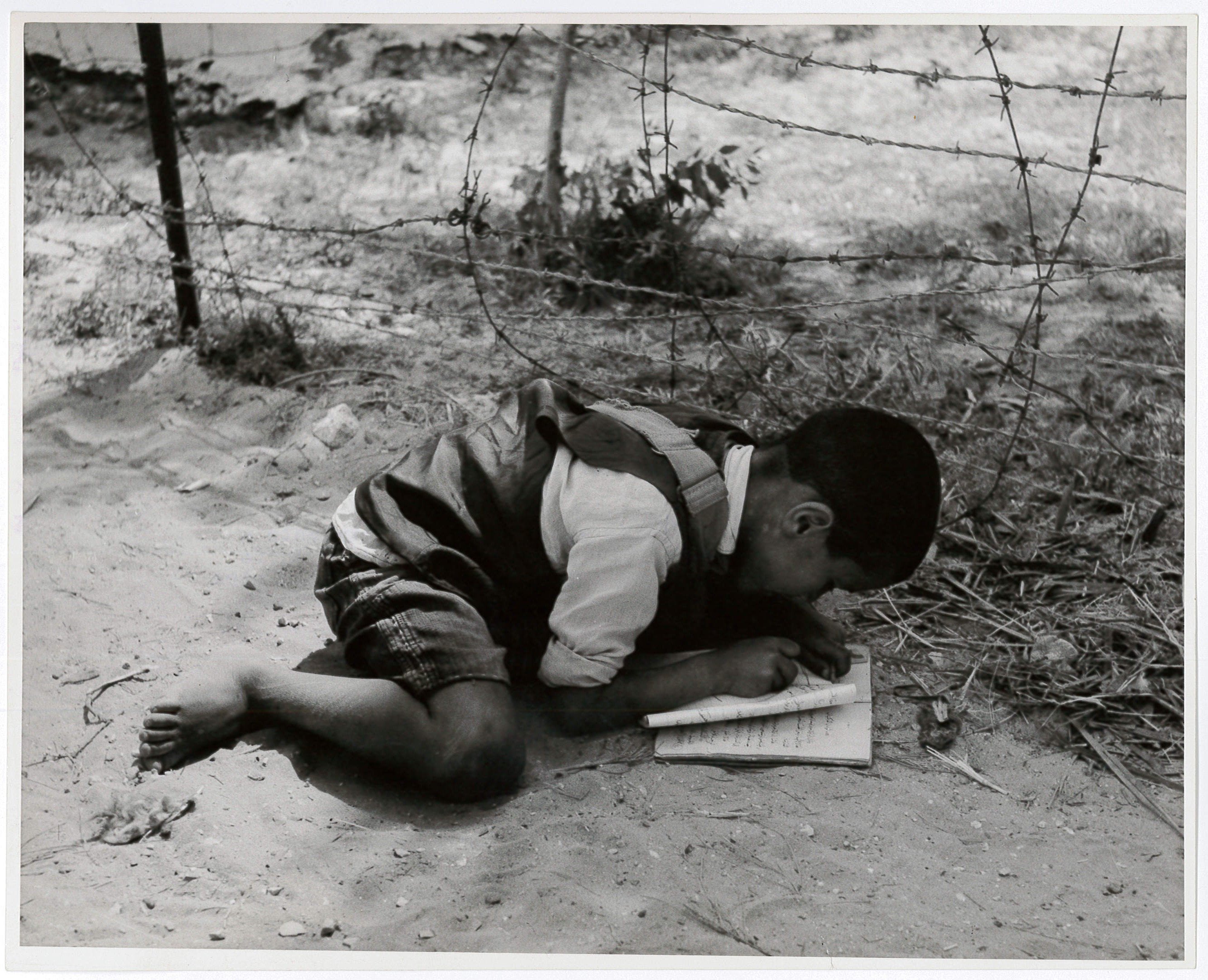 Child studying on the unmarked border between Israel and the Gaza Beach refugee camp, 1959. From Church World Service records.

Even the work of Presbyterian, Protestant, and ecumenical relief organizations, despite sympathy for the dispossessed Palestinian people, was burdened with paternalism, and overwhelmed by empathy fatigue. Most Protestant support for Palestinian refugees ended by late 1955 or early 1956: the Joint Christian Committee for Relief in Lebanon denied an UNRWA request to keep the mission school in Tyre open for refugees and demanded they pay tuition. The committee also dissolved the camp at Bint Jubeil, as Lebanese authorities raided it searching for Palestinian "infiltrators" and saboteurs, displacing 8,825 people for a second, third, or fourth time.

Some authors argue that American Protestant support for their Arab co-religionists, especially before American attitudes hardened after 1956, cloaked bias against Jews. Robert Kaplan in The Arabists argues that the generations of Protestants who grew up as children of missionaries, grew up speaking Arabic, Armenian, and Assyrian, were an out-of-touch, effete, and performative pro-Arab coterie. Among some Protestants, partiality toward Arab governments had mixed motives, which included a not-insignificant strain of anti-Jewish bias. William A. Eddy, born in Sidon to Presbyterian missionary parents, head of the U.S. diplomatic mission to Saudi Arabia, saw Israel as the main obstacle to friendly relations between the Arab world and the United States -- more than that he also identified American supporters of Israel as "traitors," accused American Jews of having dual loyalty, and believed Israel was the beneficiary of a "conspiracy to keep the blinders on the American people's eyes."

Regardless of Americans' feelings, the dispossession of the Palestinian people is a fact and is ongoing, and one of its vectors is the Israeli abuse of archaeological exploration as a pretext for land seizures and forcible evacuation of Palestinians. 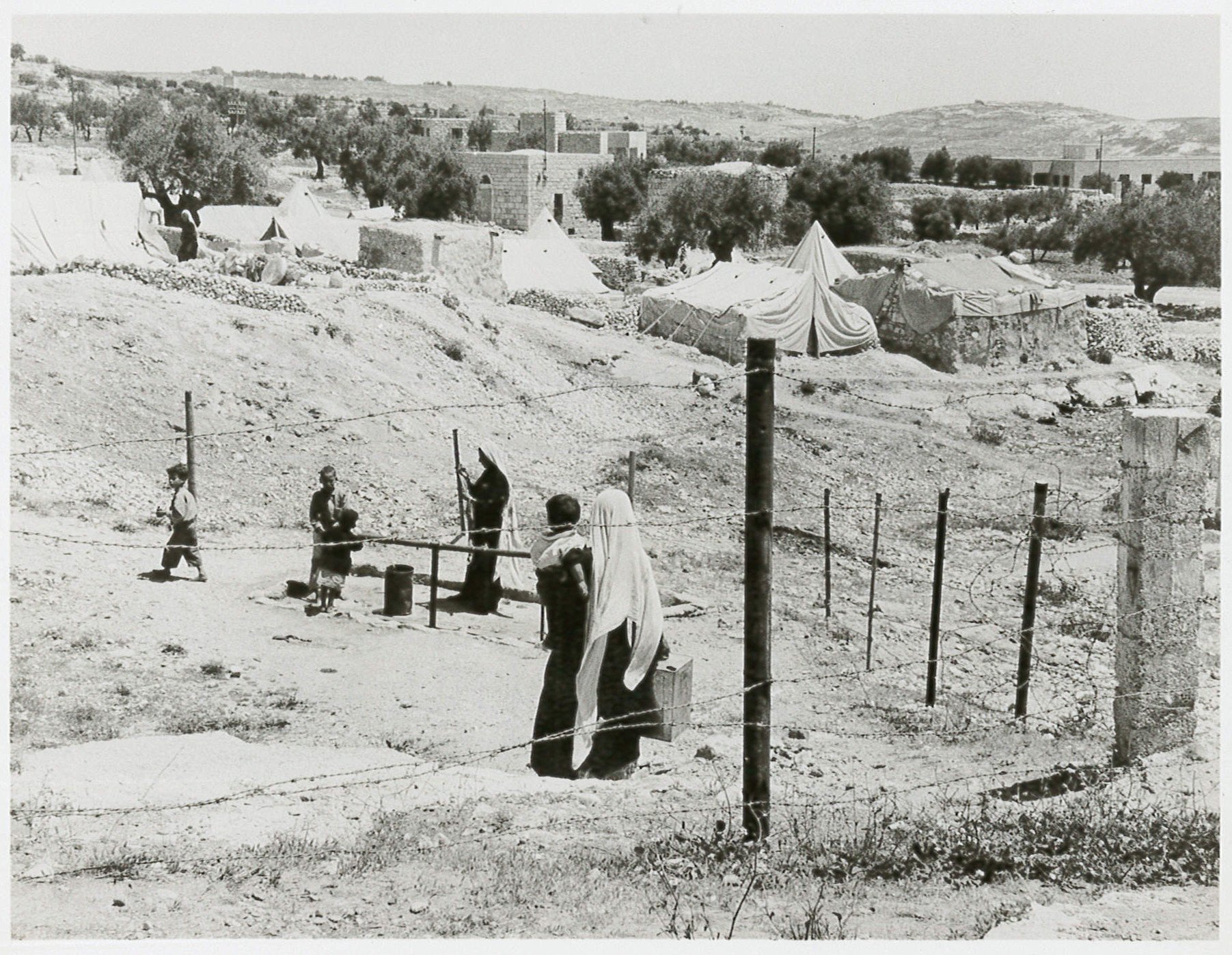 Bayt Jibrin was a Palestinian village outside Hebron. By October 1948 it was already home to thousands of people in flight from Jaffa, when the Israeli air force bombed the village. Its people were relocated to a camp in the southern West Bank, which was given the same name. Church World Service visited in 1958, by which time the settlement was semi-permanent. Israelis resettled the village as a kibbutz named Beit Guvrin. It is now a major archaeological site.

Ten years ago the Israeli settler organization Elad announced plans for a Bible-themed amusement park, sited on the City of David archaeological dig in Silwan, inside occupied eastern Jerusalem. All this summer, and continuing into October, crews from the Israeli Nature Protection Authority have razed and unearthed Palestinian graveyards to complete the theme park.

The Matrix of Occupation 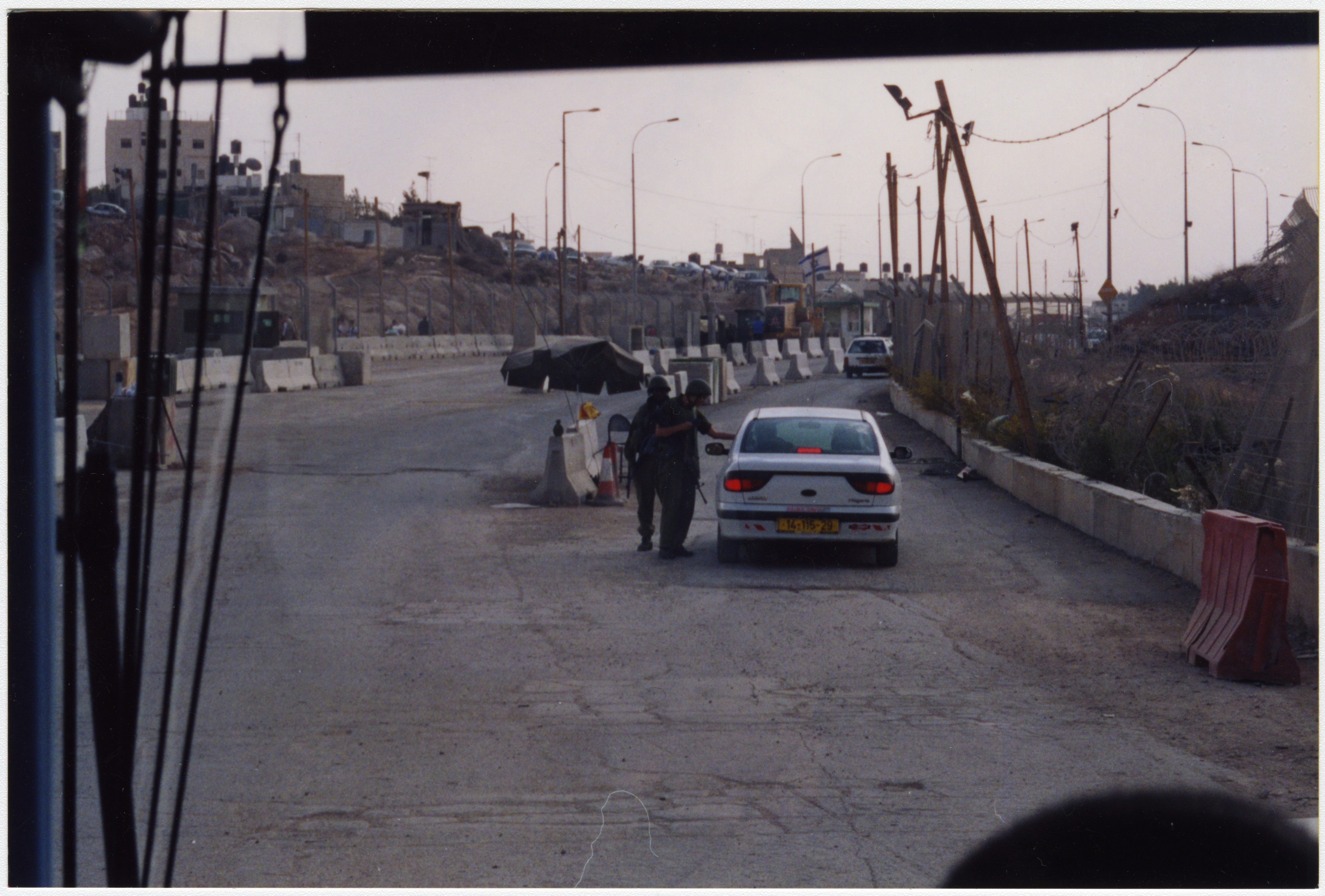