From Egypt to Tennessee: The Downtown Presbyterian Church, Nashville 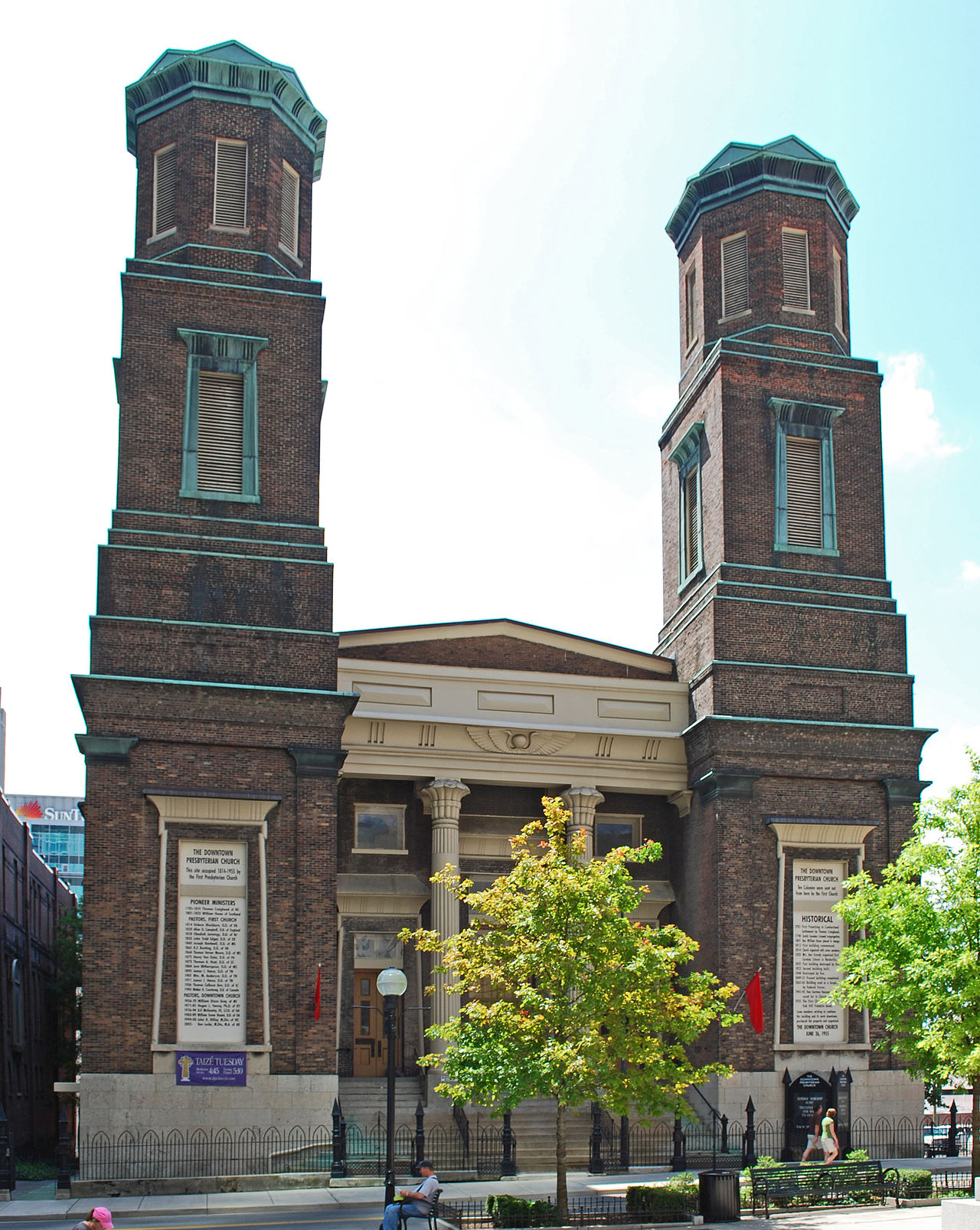 [This post is the second in a series tracing the history of American Presbyterian Church architecture through individual churches. The first churches to be discussed will be those designated as National Historic Landmarks in recognition of their outstanding historical and/or architectural significance.]

The present home of the Downtown Presbyterian Church congregation was built in 1849, for the First Presbyterian Church of Nashville. Located at 154 Fifth Avenue North (or Rep. John Lewis Way North) in downtown Nashville, the church sits among towering glass and steel skyscrapers, a remnant of an earlier time in the city’s history.

The church served as the third home of its congregation, which was chartered in 1814. Its first home, described as a “neat and substantial brick building,” seated about 400 people. Its construction began in 1812 and was completed in the fall of 1816. Less than sixteen years later, it was destroyed by fire.

Later in 1832, construction began on a new church, a Greek Revival edifice capable of seating 1,000 congregants. Described at the time as the finest church in the state with the largest organ in the city, it, too, was totally destroyed by fire in September 1848.

Only a month after the 1848 fire, the congregation of the second church appointed a building committee of nine men, including the Mayor of Nashville, both to raise building funds and to obtain plans for the building. Two sets of drawings were submitted for construction; one set was received from Briscoe Vannoy, a local architect and builder, and the second from William Strickland, a Philadelphia architect who had designed the Tennessee State Capitol, which was then under construction.[1]

Strickland’s design was selected by the Building Committee and the cornerstone for the new First Presbyterian Church of Nashville building was laid on April 28, 1849.

At the time of his design’s selection, Strickland was ranked among the leading architects of the United States. Born in Navesink, New Jersey in 1788, he was the son of a master carpenter. The family moved to Philadelphia when Strickland was two to permit his father, John, to take advantage of the opportunities of a rapidly growing city. Among the projects that John Strickland helped build was the Bank of Pennsylvania, in Philadelphia, designed by the noted architect and engineer, Benjamin Henry Latrobe. 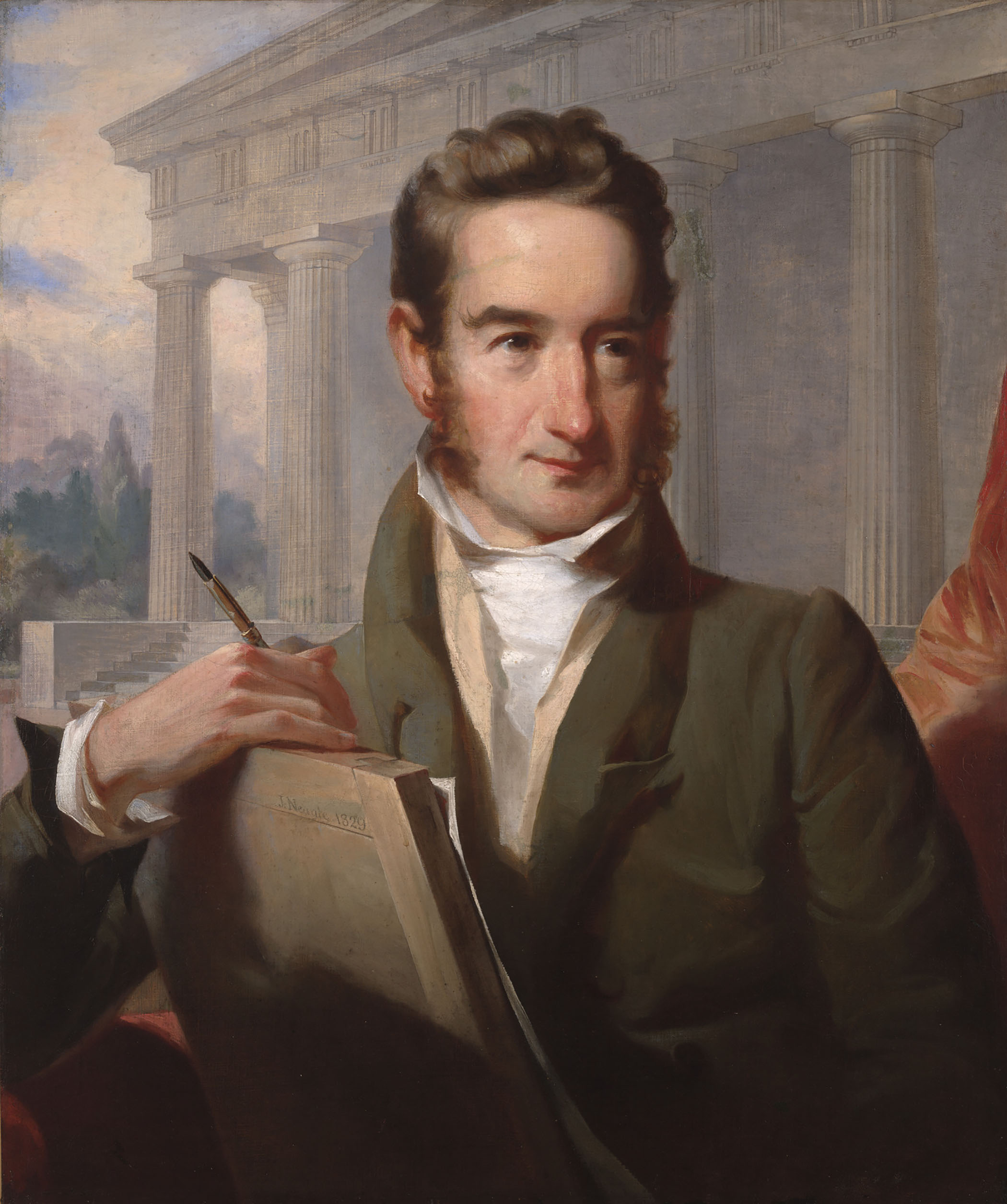 Latrobe accepted William Strickland as an apprentice when he was only 15. The young Strickland remained with Latrobe for about two years before striking out on his own. In 1808, he received his first major commission, the Masonic Hall in Philadelphia. Then, in 1818, he won the competition for Philadelphia’s Second Bank of the United States with a design based on the Parthenon. Among Strickland’s other Philadelphia commissions were the Naval Asylum, the United States Mint, and the Merchants Exchange.

With an economic downturn and the emergence of a new generation of young architects, Strickland’s volume of Philadelphia commissions declined in the late 1830s. As a result, Strickland looked for work elsewhere. In 1845, he accepted a commission as the architect of the Tennessee State Capital and remained in Nashville for eight years. During his years in Nashville, he also designed St. Mary’s, the first Roman Catholic Cathedral in the state. After suffering from a fall in 1854, he died and was interred within the Tennessee State Capitol.[2]

Just as the introduction of the Greek Revival style of architecture was attributed to the influence of sources such as Stewart and Revett’s book, The Antiquities of Athens, which introduced British and American audiences to the characteristics of Greek architecture, the much more circumscribed influence that led to the Egyptian Revival had its origins in Napoleon’s Egyptian campaign of 1798-1799. Under Napoleon, teams of scientists and artists had been employed to catalog the sights and discoveries, many of which were disseminated to a larger public in the first volumes of Le Description de l’Egypt (“The Description of Egypt”), published in 1809. The second edition, issued in 1830, was more widely disseminated, and the 1822 translation of the Rosetta Stone sparked further interest in that culture.

Strickland was among the first American architects to draw upon Egyptian influences in a commission. In his design for the Cherry Street (Mikveh Israel) Synagogue in Philadelphia, the use of battered door-and-window surrounds shows the influence of Egyptian design. Egyptian elements were most widely used to embellish memorials and cemetery gates, to honor the dead; in masonic halls to recognize the fraternal orders’ mysteries; in prisons, where the style’s weightiness connoted the security of the building; and in churches and synagogues for its references to the Old Testament and the Jewish exile. The best-known example of Egyptian Revival architecture in the United States is the Washington Monument, begun in 1848 but not completed until many years later.

Few churches employed an Egyptian Revival architectural vocabulary. Among those that did were Minard Lafever’s 1844 Old Whaler’s Church in Sag Harbor, Long Island, and the First Baptist Church of Essex, Connecticut. The two churches are similar in facade organization, displaying the influence of the decorative style in their blocky facades, narrow windows, and wide battered pilasters. 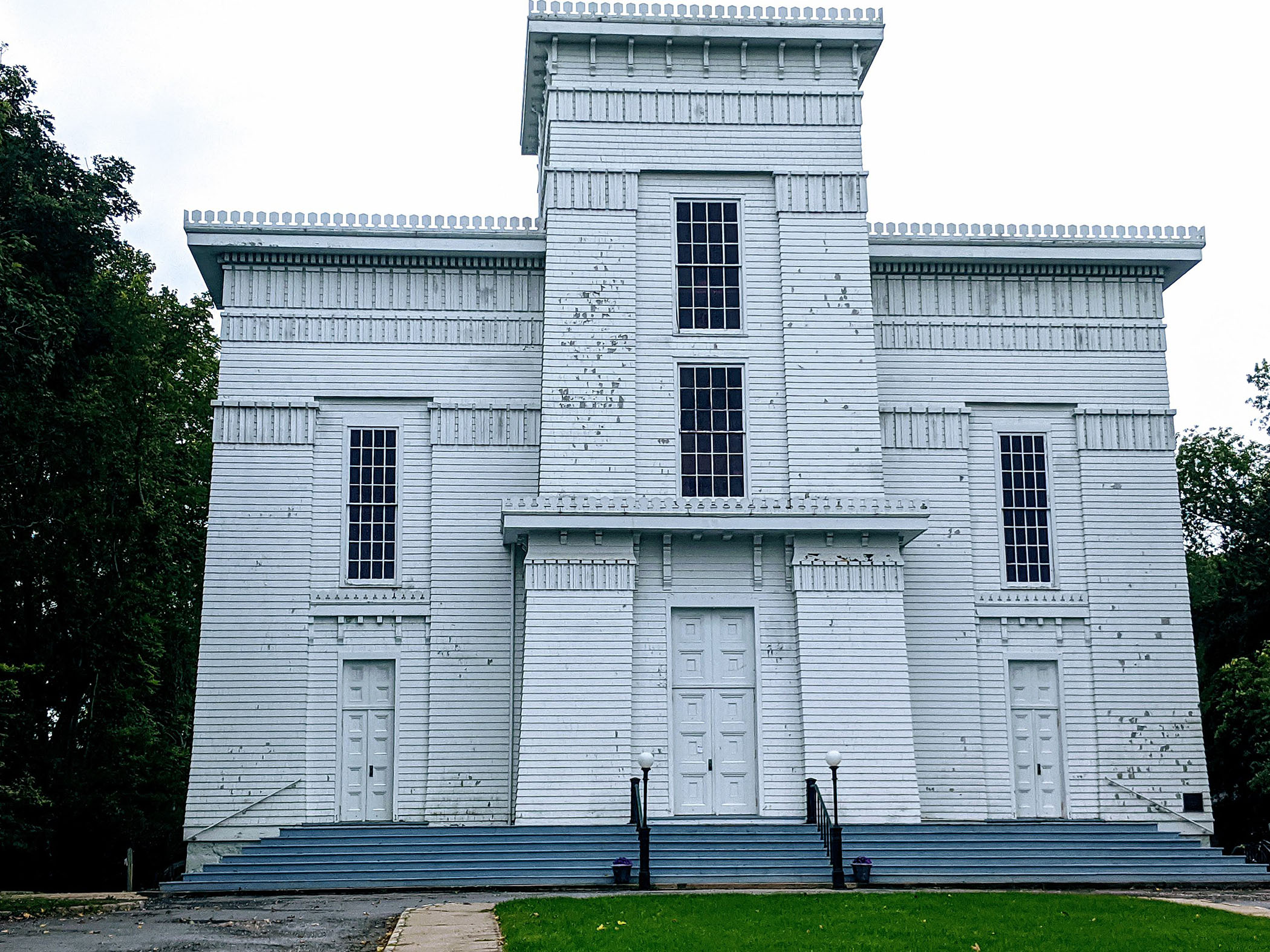 With little precedent, why did Strickland return to the Egyptian Revival style for his one Presbyterian church commission? At the time of its design, the use of Egyptian Revival elements in building design was at its height, having been used for the Tombs prison in New York City, the gates and gatehouses of the Mount Auburn Cemetery, Cambridge, Massachusetts, the entry gates of the Grove Street Cemetery in New Haven, Connecticut, for a building of the Medical College of Virginia (now known as the Egyptian Building), and for the United States Customs House in New Orleans, Louisiana.[3] 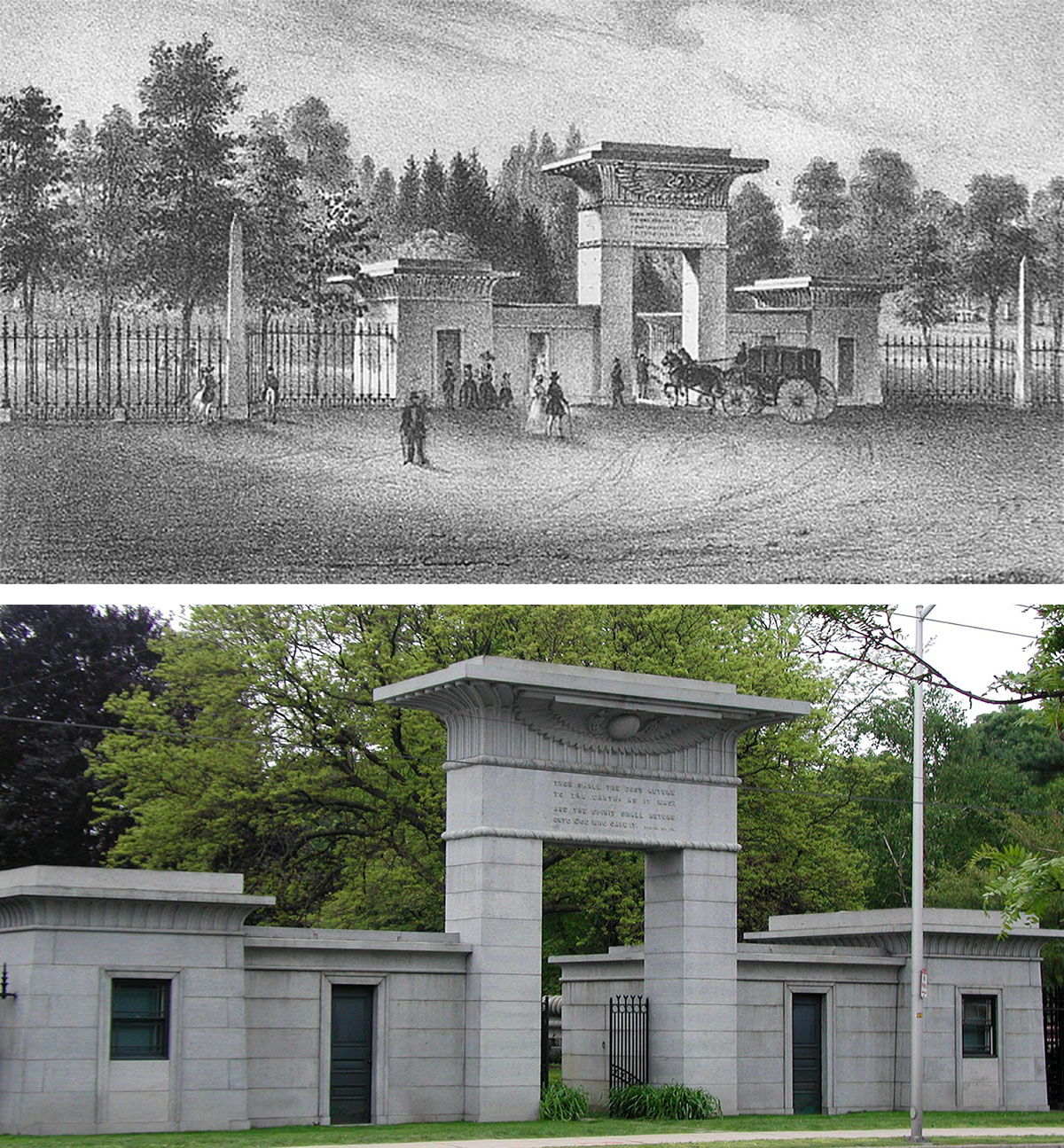 Chronicling the April 23, 1851 dedication of the church, a reporter for the Nashville Gazette expressed some uncertainty about the appropriateness of its architecture:

The building is the largest in the city, constructed it its said chiefly according to the Egyptian style of architecture. Not being a student or learned in that style, we would not venture an opinion as to its appropriateness for a modern Christian church, or how far other unknown orders have contributed in cornice, towers, circles or devices.[4] 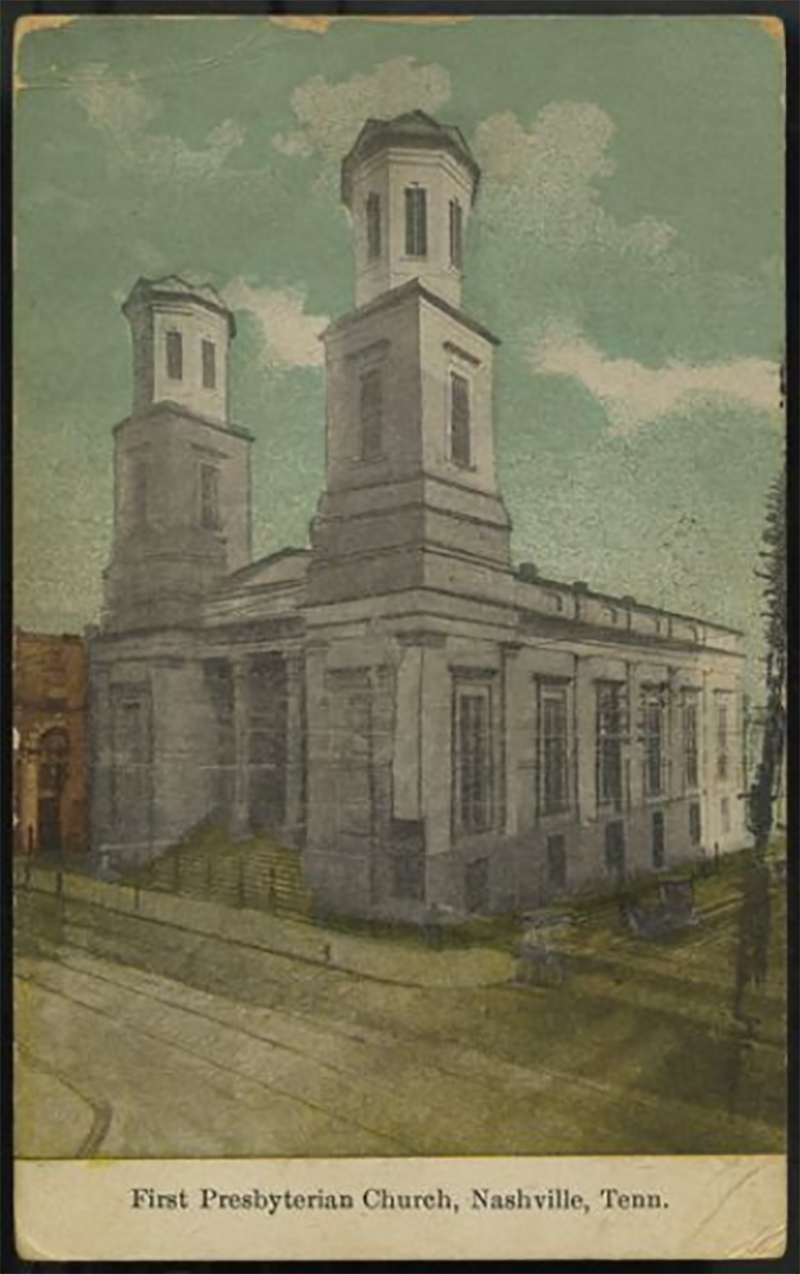 First Presbyterian Church, Nashville, Tennessee, 1910, Image courtesy of PHS, Pearl ID: 13699
During the Civil War, the church was taken over by Federal forces and used as a hospital on two separate occasions, finally being released to the use of the congregation shortly before the end of the war. The use during the war and a subsequent decade of congregational use led to interior maintenance issues. Among the more serious problems was falling ceiling plaster. In the spring of 1881, extensive interior alterations took place. The appearance of the then-remodeled church was described in a Nashville Daily American article of April 10, 1882, the day after the rededication of the church:
The auditorium of the First Presbyterian Church was formally re-opened with public worship appropriate to the occasion yesterday…. A year has passed since the work of renovation began, but as the building now stands, it is a work of beauty and art, unsurpassed by any in the city, and but few in the country. The walls of the interior have been beautifully frescoed in Egyptian style, corresponding to the Egyptian architecture of the exterior. 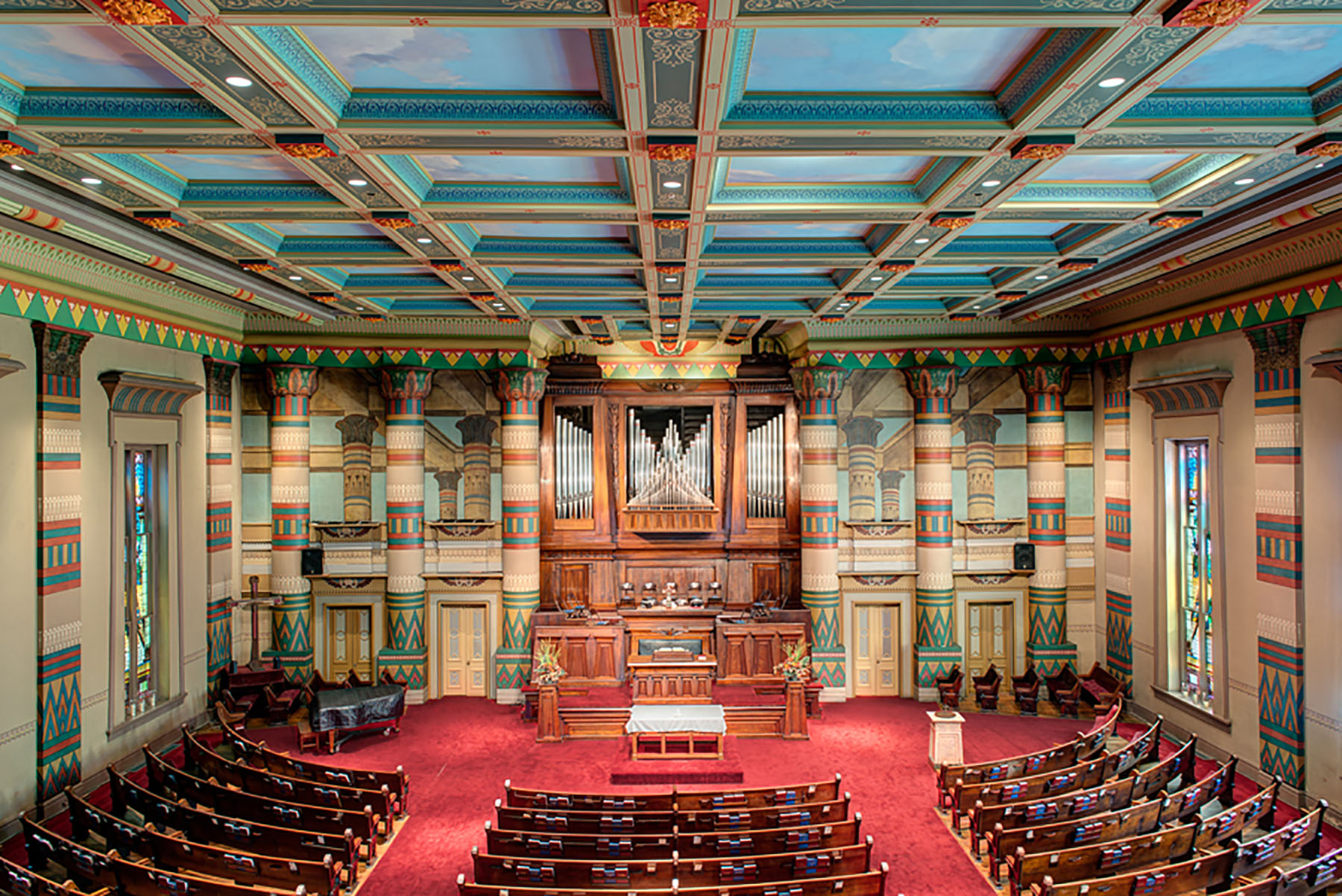 Far back in the history of the world color always had a significance, especially in church architecture exhibited in the ancient temples dedicated to religious worship.

The National Historic Landmark nomination describes the decoration of the interior:

In the early 1880s renovation, the blue, red and gold colors and the various symbols used by the architect on the columns, wall and cornices were ones which had mystic meanings in antiquity. The lilies on the columns and around the cornice and columns symbolize the Holy Trinity. The reeded member of the cornice, which are banded together with red and gold, symbolized the church members held together with the holy band of love. The most frequently used symbol added at the time is the winged-disk of Amum-Ra, which represents eternity. It appears 13 times on the walls and woodwork on the front of the sanctuary and was carved on all four sides of the baptismal font added in 1928. Before 3000 B.C., the wings, which represent the soil, were the chief emblem of Upper Egypt. The two cobras flanking each sun-disk the emblem of Lower Egypt. They represent wisdom. With the kingdoms of Upper and Lower Egypt were joined in 3000 B.C. by the first Pharaoh, Menes, their respective symbols were linked to signify the union.

It was during the renovation that the two “amen” corners were partitioned off into two rooms, one for the Session and the other various uses. The walls that separated the new rooms from the sanctuary were painted to give the effect of a series of columns stretching away into the distance from the columns in the sanctuary. The same renovation also included a dramatic modification to the ceiling which heightened the resemblance of the sanctuary to Karnak. The ceiling was divided into squares, each painted to depict clouds and blue sky.[5]

The interior was renovated several times following the original remodeling of 1881, but the decoration of the sanctuary has not been altered.[6]

In 1954, the First Presbyterian congregation voted to relocate from their downtown location to a new site in the suburbs. Afterward, the empty church building faced the prospect of demolition for a parking garage. Just one year later, in 1955, after lobbying by church members, concerned local residents, and the National Trust for Historic Preservation, the church was saved by the formation of the Downtown Presbyterian Church. The core of this church’s original members were former members of First Presbyterian congregation who preferred to continue to worship downtown.[7]