Even before the COVID-19 pandemic focused the world’s attention on the sacrifices nurses and other health care workers make every day, the World Health Organization had designated 2020 the “Year of the Nurse and Midwife” in honor of the 200th anniversary of Florence Nightingale’s birth. Known as the “founder of modern nursing,” Nightingale helped nursing become an esteemed, professional career through her innovations in nursing education and patient care. Her principles and methods influenced Presbyterian missionaries who carried the “Nightingale Method” with them as they established nursing schools – often the first of their kind – in mission lands.

The Lady With the Lamp

Born to a prominent British family on May 12, 1820, Nightingale was an inquisitive child who, with her father as her teacher, received a better education than most young Victorian women. At 16, she experienced the first of several spiritual calls to serve the sick and suffering. Her family, however, expected that she would fulfill this call as a philanthropically minded upper-class wife and mother, not as a nurse. Nursing was considered low-skilled, menial work, the ambit of poorly educated women of little means. Nightingale remained steadfast in her desire to become a nurse and visited hospitals, almshouses, and charitable care institutions in the United Kingdom and Europe in her twenties. In 1850, she trained for several weeks at the Deaconess Institute at Kaiserswerth, Germany, a Lutheran-run institution that combined theological education with nursing training in order to produce “deaconesses,” lay women who could assist male clergy in tending to the needy. Nightingale returned to London and started her first official position at the very specifically named Establishment for Gentlewomen During Temporary Illness in 1853.

The “Nightingale Method” of nurse training became an influential model for nursing programs in the United Kingdom, the United States, and the many parts of the world touched by Presbyterian missionary effort.

Nightingale gained a national reputation as a hero when, in 1854, she led a team of volunteer nurses to Scutari (modern day Turkey) to address the conditions at a British military hospital during the Crimean War. More soldiers were dying from secondary infections and diseases such as cholera and typhus than from injuries sustained on the battlefield. The hospital, Nightingale learned, was overcrowded, filthy, poorly equipped, and understaffed. She quickly implemented sanitation protocols that sound familiar to us today – 3 feet of distance between patients, proper ventilation, frequent cleaning and disinfecting the environment – as well as the less familiar, but still sensible, demand that horse stalls be moved out of the hospital’s basement. In six months, the mortality rate dropped from over 40% to 2%. Nightingale returned to London a hero, the “ministering angel” whose nightly, lamp-lit rounds in the Scutari hospital gave rise to the nickname “the Lady with the Lamp.” 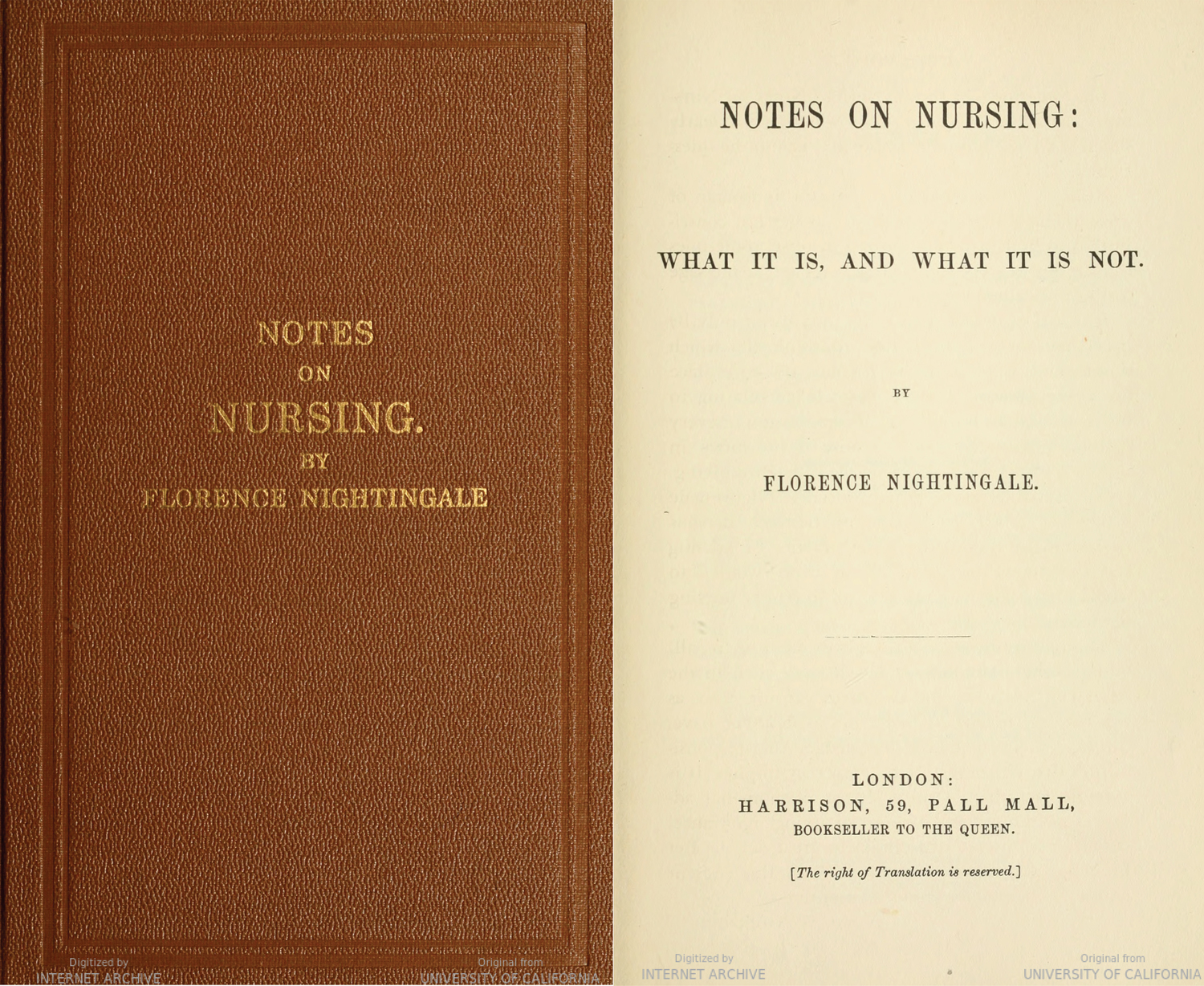 Title page of 1865 edition of Notes on Nursing. Click to read. [Image courtesy of Hathi Trust]

Nightingale’s experiences during the Crimean War informed her Notes on Nursing (1858), which presented patient care as a holistic system that included hygiene and nutrition, environmental conditions such as noise and ventilation, and social considerations such as the potentially deleterious effect of “chattering friends.” Two years later, she used the large monetary award she'd received for her Crimean War service to establish the Nightingale Training School and Home for Nurses in London. The school was organized around the principle that nursing was “an independent health care profession, with a specific function of patient care different from medicine and requiring its own distinctive training.”[1] The school’s innovative curriculum consisted of a year of training and coursework, followed by a two-year practicum in hospital wards. The Nightingale School was the first modern nursing school, and the “Nightingale Method” of nurse training became an influential model for nursing programs in the United Kingdom, the United States, and the many parts of the world touched by Presbyterian missionary effort. 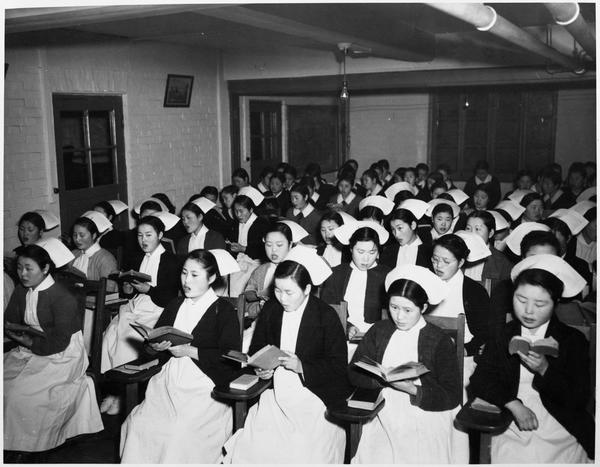 Presbyterian Nursing Around the World

As Presbyterian medical missionaries spread out into the world, they carried the Nightingale model with them, typically establishing a nursing school at the mission hospital. Student nurses provided a reliable, free labor source for the mission hospital. But the desire to train local women as nurses also had loftier, albeit ethnocentric, ambitions. A nursing career could provide a woman with economic independence, increased social status, and facility with English, as well as “elevate” her above the role proscribed to women in non-Christian societies. Native nurses could also act as conduits for bringing Western medical practices into communities. PHS’s archival collections offer many opportunities to study the rich and often complicated history of these nursing schools:

--Our Korea Mission records, for instance, include materials about the second nursing school established in Korea, which was opened at Seoul’s Severance Hospital in 1907 by Esther Lucas Shields, a graduate of Philadelphia’s General Hospital Nursing School. Our library collection also includes secondary sources about Korean nursing history, like the appropriately titled Florence Nightingale of Korea, Angel of Korea about Shields.

--Our Iran Mission records document the 1916 establishment of that county’s first nursing school, which remained the only nursing school in Iran for two decades. Iranian nursing history can also be explored in the papers of missionary and physician Rolla Hoffman whose second wife, Helen, was a registered nurse.

--Working under the auspices of the Women’s Union Missionary Society, an interdenominational Protestant group, women missionaries brought Western nursing to China in the late 19th century, and nurse education programs were established at Protestant mission hospitals around the country. The Yates Family Papers document the life of Jean Yates, an American missionary nurse, during China’s turbulent 1920s and 1930s. The Sarah Emily Perkins Papers reveal a nurse educator’s imprisonment by Chinese Communists from 1950-1955.

--PHS also holds the personnel files of more than of more than 450 Presbyterian missionary who served in 37 countries. 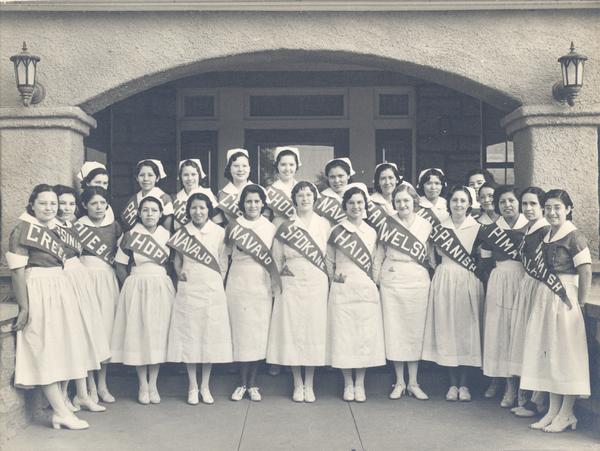 Presbyterian Nursing in the United States

As for their foreign counterparts, domestic nursing schools became a way for home missionaries to educate, but also assimilate, non-white communities. In 1930, Dr. Clarence Salsbury, a member of the Presbyterian Ganado Mission on the Navajo reservation in northern Arizona, established Sage Memorial Hospital School of Nursing, the only nursing school opened for the sole purpose of training Native American nurses. One hundred and fifty women from different Native American tribes and immigrant communities graduated from the school before it closed in 1951. The fascinating history of the Ganado nursing school is the subject of Jim Kristofic’s recent book, Medicine Women, which was researched in part at PHS.

Four months into the coronavirus pandemic, it is hard to imagine that nursing was ever regarded as unskilled, menial work. At PHS, we are grateful for the nurses and health care workers who are battling COVID-19 on the frontlines, and for Florence Nightingale and the Presbyterian missionaries and educators that she inspired.