Processing the Voices of Sophia Records 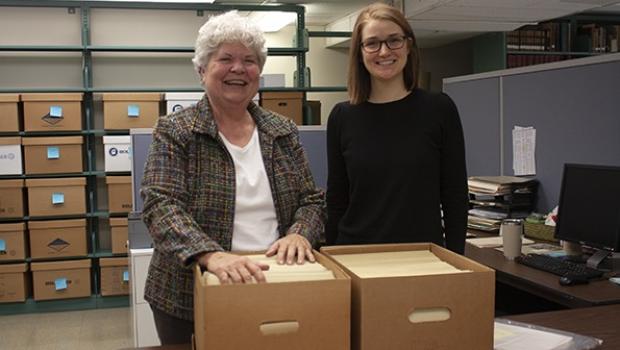 “At a time where feminist values were disparaged, marginalized, and trivialized as ‘politically correct,’ Voices of Sophia called the PC(USA) to its historic commitments to women, to justice, and to reformation. It encouraged spiritual growth, renewal, and interpersonal connections around women’s theologies and justice issues.” –-Janet Lowery

In 1993, the feminist Re-Imagining Conference caused an uproar throughout the Presbyterian Church (U.S.A.). The PC(USA) had donated money to support the ecumenical event. Critics warned against Re-Imagining’s message that feminists could push the boundaries of orthodoxy and still be Christian. Following the conference, immense criticism was heaped upon all Presbyterians who attended and Mary Ann Lundy, head of the PC(USA) Women’s Ministry Unit, was removed from her position.

A year later, sixteen people invited by Sylvia Thorson-Smith and Mary Kuhns created a special impact group within the denomination to address the issues raised by Re-Imagining and the backlash it received. They named the organization Voices of Sophia and their purpose was to “transform the church into a discipleship of equals.” VOS held annual gatherings, distributed newsletters, and grew a membership that peaked at over 500 members. The organization was visible at each General Assembly, advocating for progressive overtures and offering encouragement through its VOS Breakfast and booth. In 2010, VOS combined with the Witherspoon Society to form Presbyterian Voices for Justice.

The Voices of Sophia Records in the final stages of processing at PHS, March 2019

Sylvia Thorson-Smith donated records from VOS to the Presbyterian Historical Society last year. This March, Janet Lowery, a retired PC(USA) pastor and member of Voices of Sophia, volunteered at the Society for three weeks and helped to process the records. As we worked with the collection, Janet used her memories of VOS to provide insights into how and why the records were created. She was able to identify people in photographs and recognize where unlabeled pictures were taken. When she came across files with planning notes and minutes from the VOS annual gatherings, she shared her own experiences attending each event.

As we approached the end of this work, I asked Janet about her time processing the Voices of Sophia records. Below is a transcript from our conversation.

Elizabeth: Could you talk about your personal experiences with Voices of Sophia?

Janet: As a parish pastor and as someone who attended the Re-Imagining Conference, Voices of Sophia was an important organization for me because it was a place where we could be honest about our theological proclivities, our beliefs. Having gone to Union Theological Seminary in New York City I already was inclined toward Christian feminism which is where Voices of Sophia got its energy. It was a place where our theological insights and gifts as women would be recognized and celebrated. We could be with other people who challenged us to dig even deeper into more profound ways of expressing Christian feminism....

It was a really fun group. There was always color; there was singing; there were different ways of learning, not just in the head. And it was a wonderful group of women. The main thing that we did were the annual gatherings. The saddest part about that was that not everybody who wanted to come could afford to do it or have the time to do it. But the folders that I worked with in the collection show the process of coming up with the program and taking care of those who showed up. There was always a great emphasis on hospitality in anything that Voices of Sophia did, to check in with people about how are they were doing and to make sure that they left strengthened, in better shape than when they came. 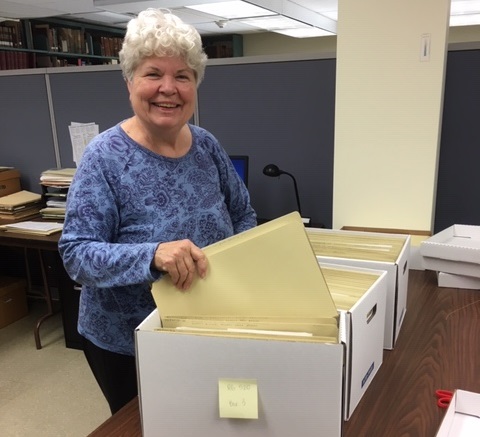 Janet Lowery working with the Voices of Sophia records, March 2019

Elizabeth: So what was it like to work with these records?

Janet: Well, it made me grin of course to see the names of people that I appreciate--some of them old enough to be foremothers for me, and some contemporaries, and some new voices. So just that reminder was great: that Christian feminism and womanist theology and the things that challenged us are part of a stream that keeps going. And so it’s rewarding to me that the records are saved to show these stepping stones that were in the stream at this one juncture of history.

And I’m sad to leave the collection in a way. Working with these reminders of events, because I had been able to be at them, transported me back to the actual experience. Voices of Sophia was for me a reminder of the breadth of the Church. I already was familiar with the progressive views of the Witherspoon Society, but the Re-Imagining Conference really was a take-down-walls and think creatively event. Voices of Sophia was never fearful of that creativity whereas the reaction from our more orthodox peers was fear, a very fearful reaction. So working with the materials reminds me of how important an oasis Voices of Sophia was for a lot of women and men, especially at General Assemblies, which could get very tense and rife during that time. The Voices of Sophia Breakfast was always a chance to look around and make sure you are not alone, that all these other people are joined together in a Church that really is more inclusive. The Breakfasts still continue and again, keeping archives, we of a certain age are still hoping that the young ones who come along later will see how much progress has been made.... And I hope that somebody will look at Christian feminism in the Presbyterian Church someday and that these materials will be a little diamond in their discovery process.

Thank you Janet for all of your hard work at PHS! The Guide to the Voices of Sophia Records is available here.

The home of 500 years of Presbyterian history