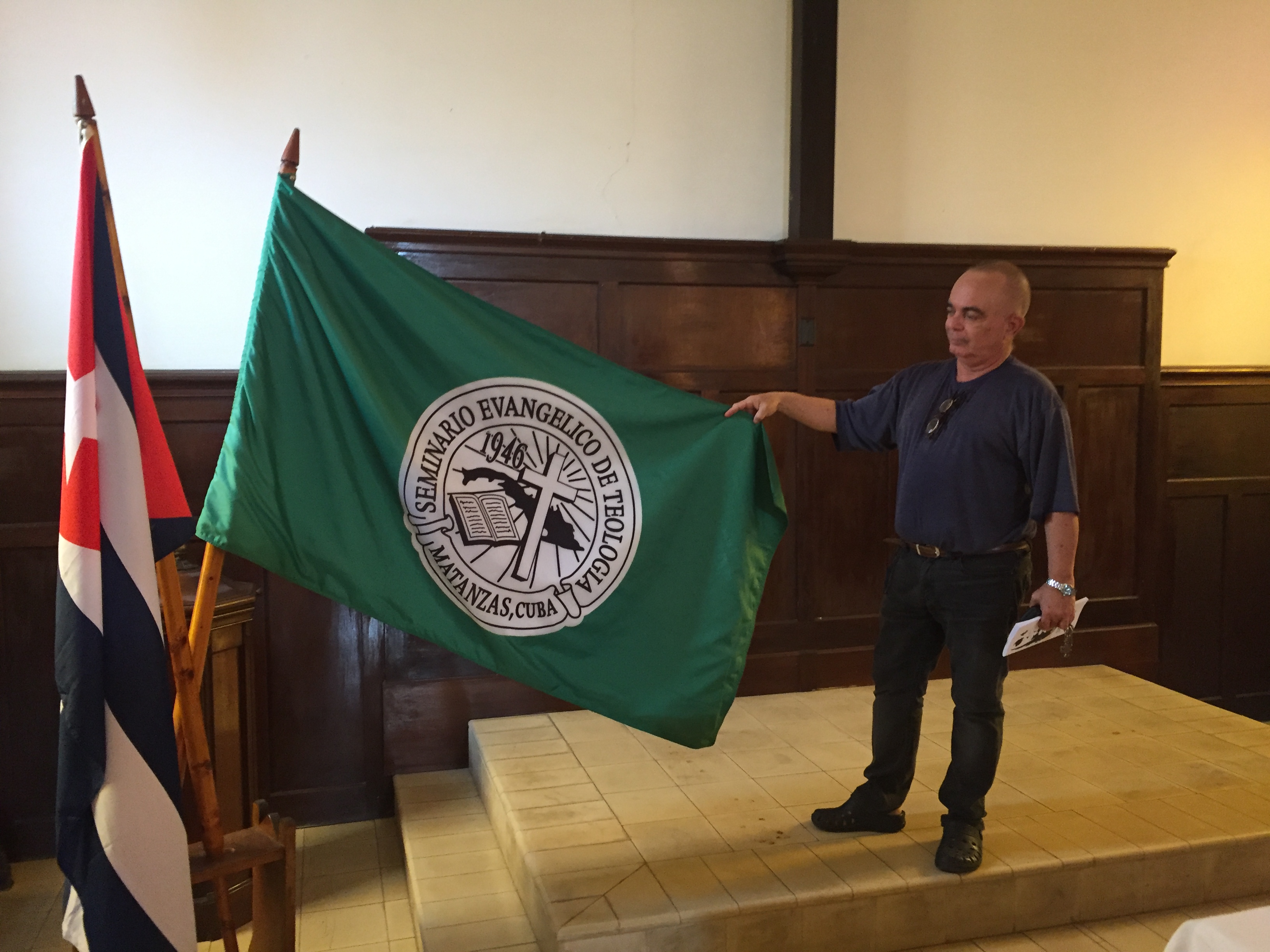 The Cuba of worn surfaces and iconic profiles, of enduring machines and fading memories, was what I first noticed during a recent visit to the island. But what impressed me most by the end of the five-day trip was the rich interiority of the Cuban people—how those I spoke with valued friendships, families, and faiths (religious faiths but also historical ones) over surface identities. Cuba looks different than other places--claro. Its irreducible essence is its soul. 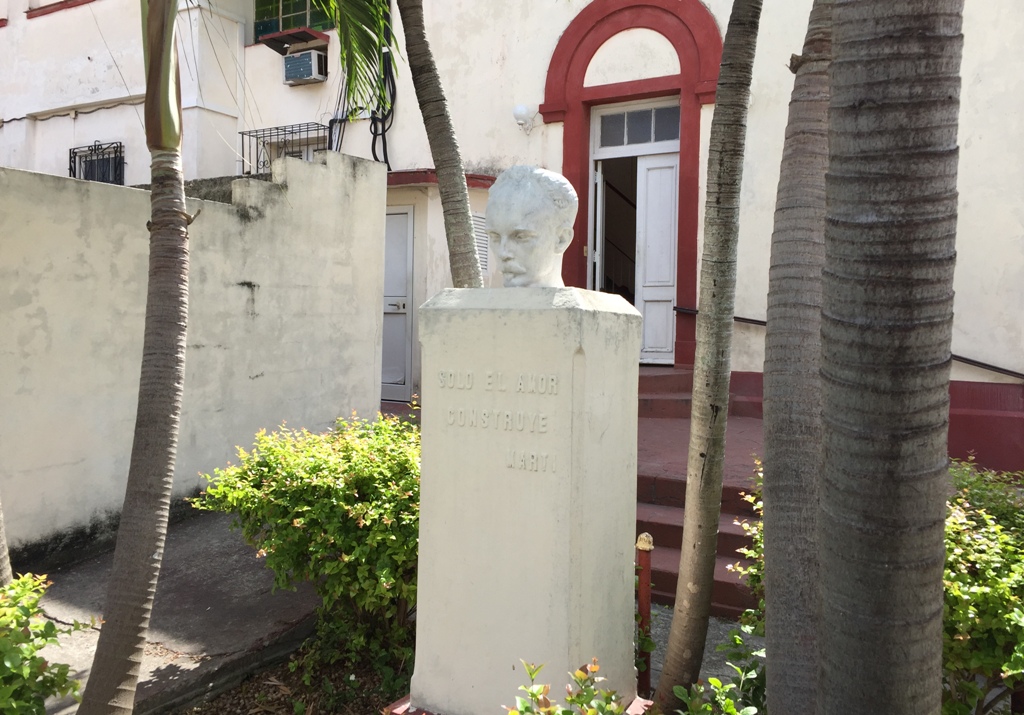 Marti bust at side of Luyanó church, Havana 2018.

I visited Havana and Matanzas as part of a PC(USA) team that included Rev. Byron Bland, an expert on international conflict resolution, and two Office of the General Assembly communications colleagues, Rev. Jerry Van Marter and Randy Hobson. Rev. Jo Ella Holman, Presbyterian Mission Agency Regional Liaison for the Caribbean, coordinated the trip and joined us at the end of our second day.

From our Havana residencia at La Iglesia Presbiteriana-Reformada de Luyanó (First Presbyterian-Reformed Chruch of Luyanó) we took short trips to famous historical sites, including the Plaza de la Revolución and Hotel Nacional, and to lesser-known monuments to the capital’s religious past and present. The pastor at Luyanó, Rev. Daniel Izquierdo, accompanied us on visits to Primera Iglesia Presbiteriana-Reformada de la Habana (First Presbyterian-Reformed Church of Havana) and Instituto Superior Ecuménico de Ciencias de las Religiones (ISECRE/Ecumenical Institute of Religious Sciences). With help from our intrepid driver Juani, we even paid roadside homage to a statue of John Calvin. 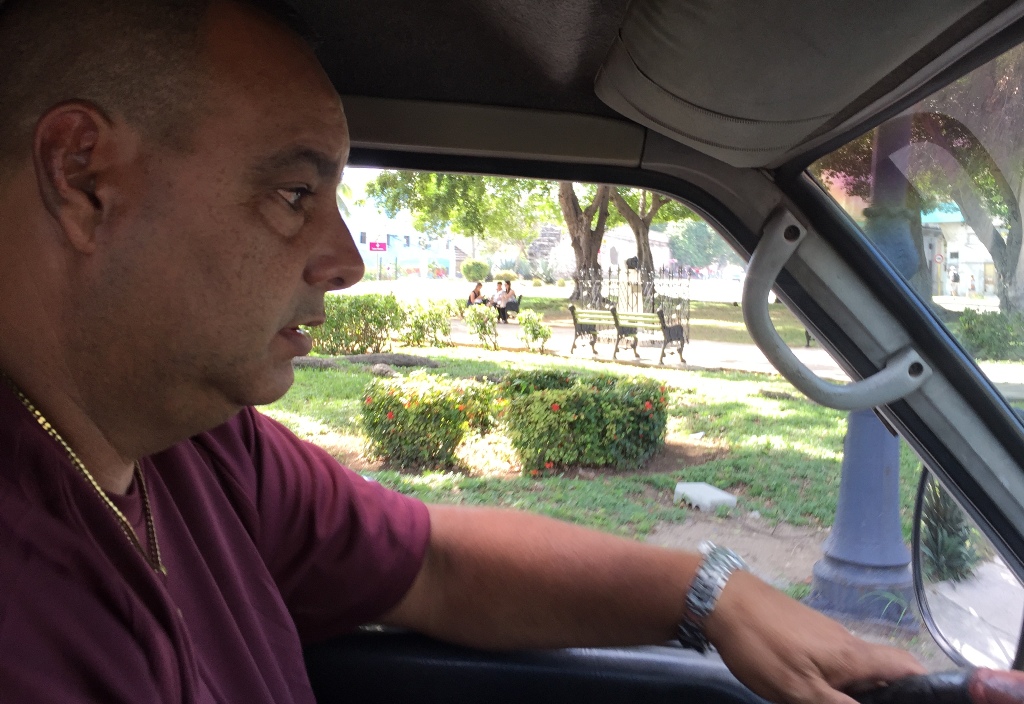 Bust of Calvin in the distance, Havana 2018.

Daniel's church in Luyanó, organized in 1922, provides for the spiritual and physical well-being of its neighbors; a Living Waters well, open to the public, will soon draw its millionth filtered gallon. First Havana’s pastor, Liudmila Hernandez Retureta,  detailed some of the ways her congregation is similarly engaged with its surrounding Chinatown community—a tai chi class filled the courtyard the morning of our visit—and with the entire island. The church's mental health hotline, “Teléfono de la Esperanza," managed by Miriam Álvarez and Martha Rodriguez Cabezas, gives Cubans remote access to mental health counseling. First Havana has a special place in the island's history books, many of which line the shelves of the church's library. The congregation's 1901 founding makes it one of oldest Presbyterian churches in Cuba. During the tense build-up to the 1959 revolution, a sanctuary gable hid the radio transmitter for Radio Rebalde, an insurgent broadcast frequency. 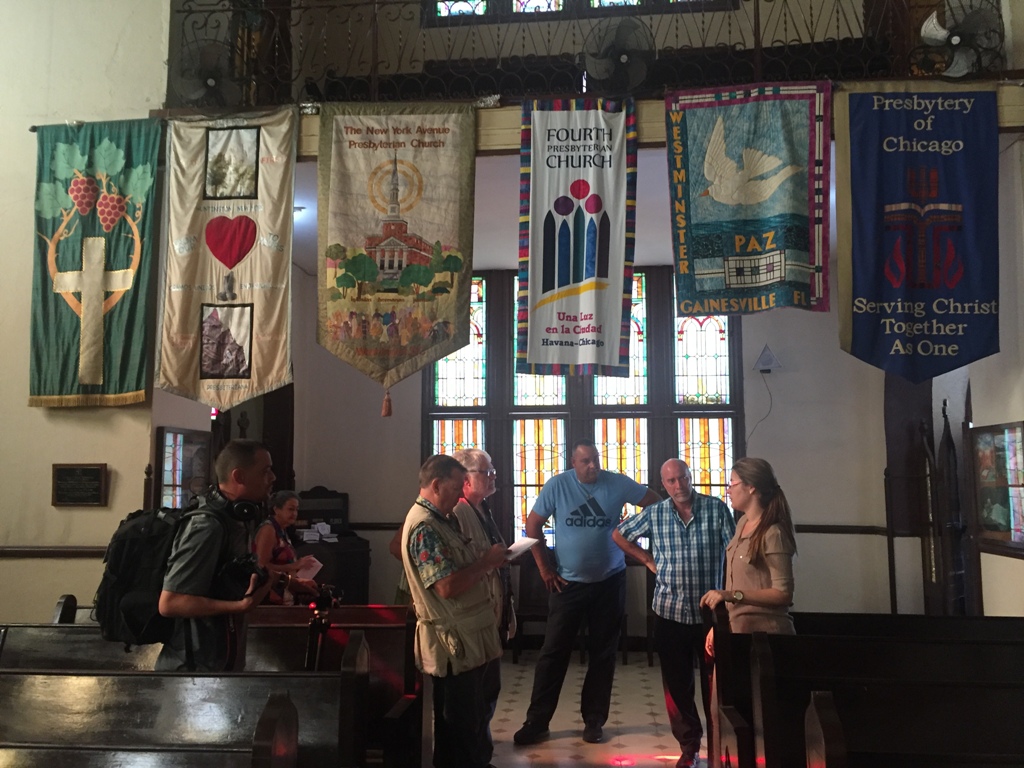 ISECRE, in the leafy Vedado neighborhood, connects students with Cuba's religious traditions—a process of ecumenical exploration that became possible during the Special Period of the 1990s, when support from the Soviet Union ended and faith groups were afforded greater latitude by the government. ISECRE's graduate programs lead students through a survey curriculum of classes including Christianity, Santeria, Judaism, and Islam—a growing religious community in Cuba. ISECRE is closely affiliated with the Seminario Evangélico de Teología (SET) in Matanzas, where we traveled on our third day.

Founded in 1946 by Methodists, Episcopalians, and Presbyterians, SET serves today as a seminary and gathering place for the island’s Protestant community. So it was no surprise to find Pastor Liudmila from First Havana visiting Matanzas on our first full day there—the same day I parted ways with the other PC(USA) travelers, who headed east to tour churches and missions damaged by the hurricanes of 2017. 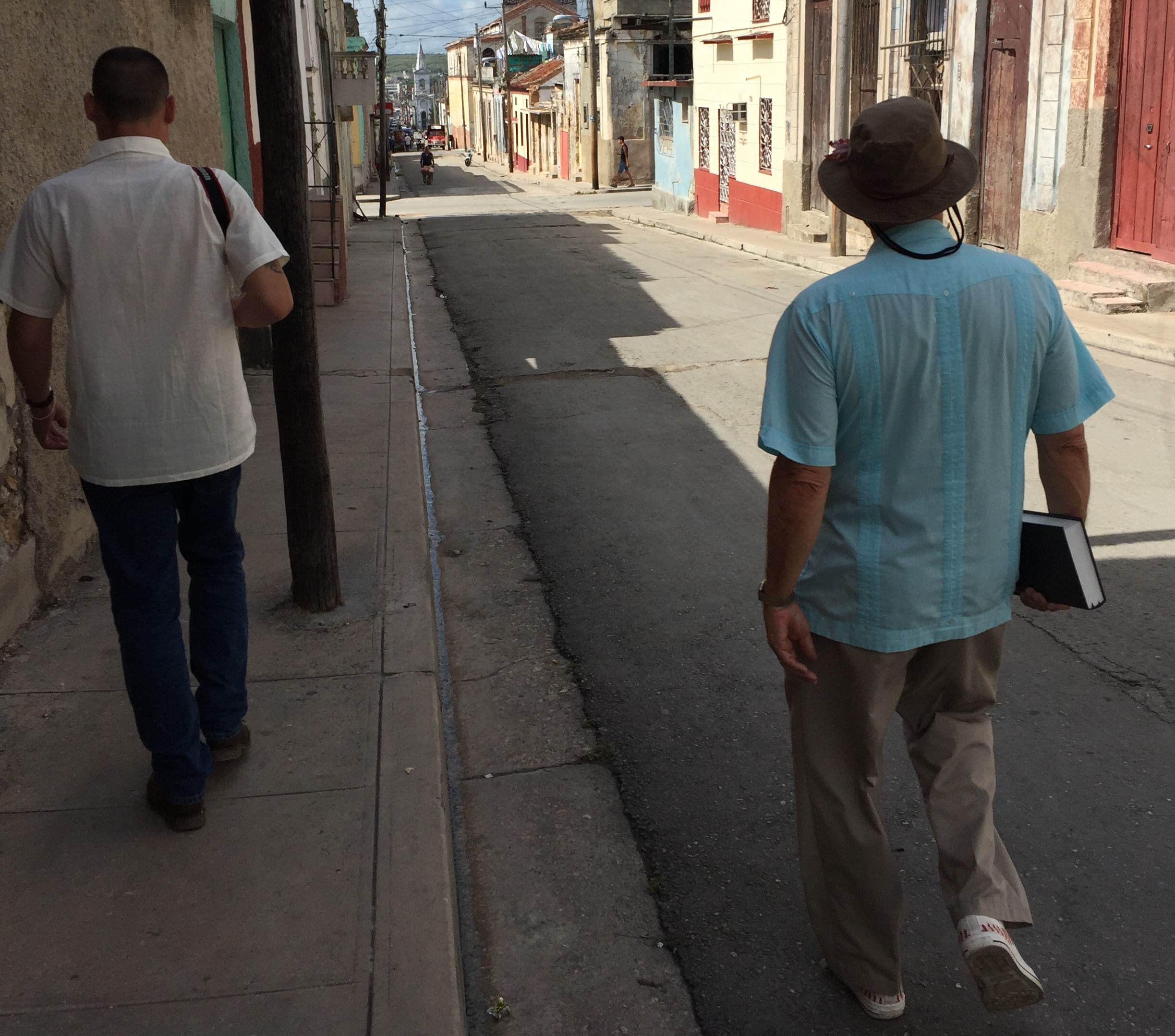 Just as Liudmila and Daniel peeled back layers of Havana’s Presbyterian history, Rev. Francisco Marrero, the seminary’s historian and former dean, brought SET’s 71-year timeline to life. Francisco was born in Havana, moved to Matanzas at age 10, and has mostly lived near the seminary since. For the past six years, he and other Presbyterian leaders in Cuba, in addition to friends from the United States such as Rev. David Cassie and Rev. Dean Lewis of the Cuba Partners Network, have led a Yale University-funded digitization project that will produce, upon completion, 200,000 preservation scans of records and historic publications documenting Cuba's Protestant past.

Francisco proved a gracious guide and entertaining raconteur as he showed me the seminary's digitization studio and other parts of SET's archival setup, introduced me to the three-person digitization and archives staff, and walked me through the well-kept seminary buildings overlooking the Bay of Matanzas. Inside the chapel Francisco posed with a flag presented to SET by the Synod of New Jersey, a PC(USA) mid council with strong ties to Cuba's Presbyterian community before and after the formation of Cuba's national church, La Iglesia Presbiteriana-Reformada de Cuba (IPRC), in 1967. 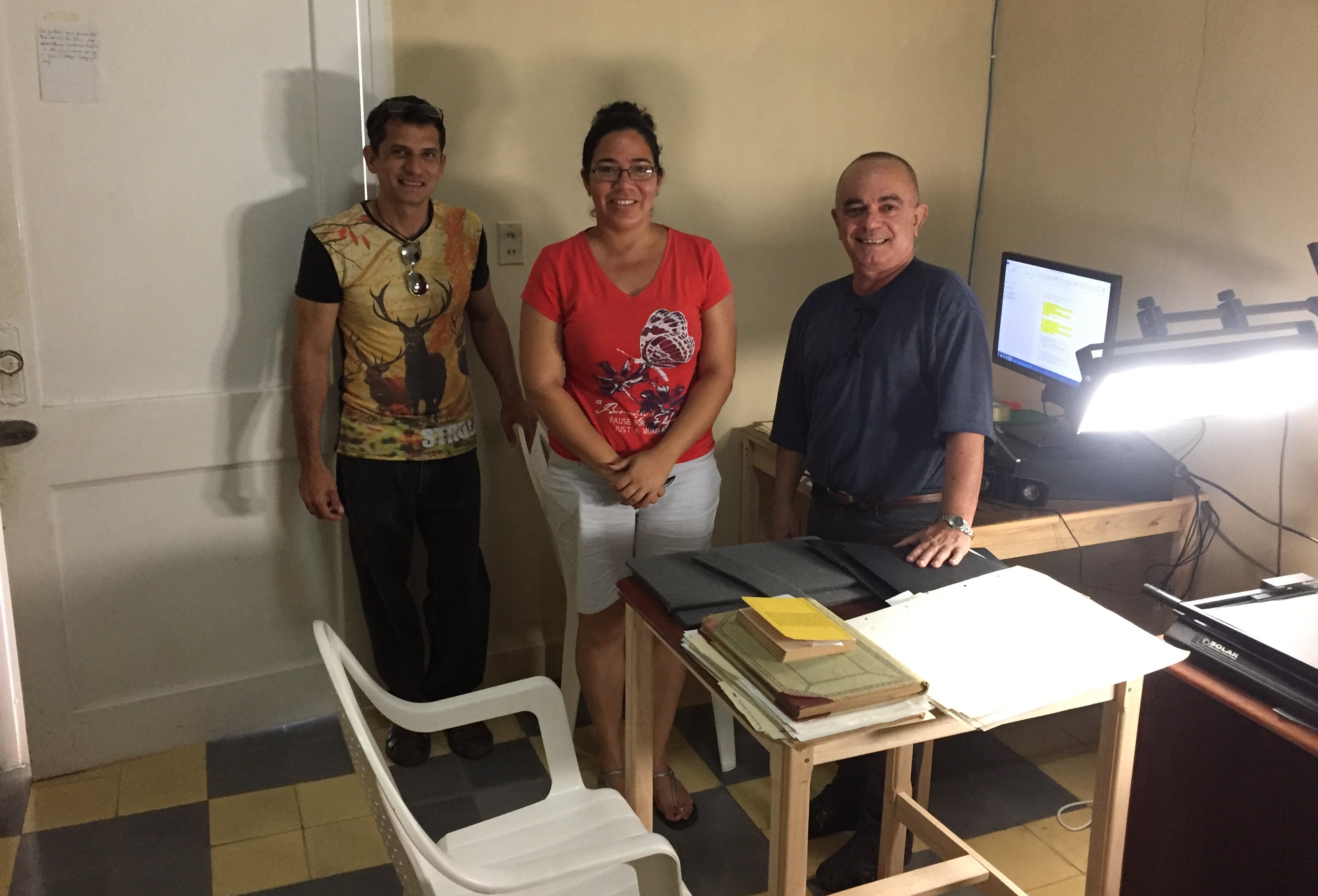 Matanzas's two Presbyterian churches, La Iglesia Presbiteriana-Reformada de Versalles and La Iglesia Presbiteriana-Reformada de Matanzas Central, are ministered to by the seminary director Rev. Carlos Emilio Ham (Versalles) and the Reverends Ary Fernandez and Beidy Casas-Aragón (Central); Ary would speak at the Cuba Partners Network breakfast during General Assembly 223 in St. Louis. Another Presbyterian leader in Matanzas, Rev. Daniel Montoya, sat with me on my last afternoon and recounted stories of his decades pastoring to Presbyterians across the island. The IPRC's membership is small—Daniel estimated that half to two-thirds of the island's Protestant clergy left Cuba after the revolution, most for the United States—with many pastors serving two or three worshipping communities at once. And yet Daniel is not discouraged. To him, the Cuban church today resembles the early Christian church in the time of Saint Paul, with an independent spirit and immense potential for growth.

The Cuban Church certainly has a strong foundation on which to build, with historic buildings, innovative schools and congregations, and talented and dedicated leaders. Francisco and I discussed plans for him to visit PHS in the fall, so that he can research the earlier Cuban Church using our collection materials and discuss technical assistance collaborative opportunities between SET's archival operation and PHS. I showed him our general brochure and began to talk about our faux-Colonial 1967 building featured on the cover. He politely stopped me from going on, explaining that he'd visited PHS once before, seen the portable compact shelving, noted the acid-free boxes, talked to our archivistas. The building was nice, but he wants to return for what's inside.

Karla Ann Koll, “Volcanic Revolution on the Home Mission Field: Response of the United Presbyterian Church in the United States of America to the Revolution in Cuba.” The Journal of Presbyterian History, Vol. 82, No. 3 (Fall 2004), pp. 149-168.