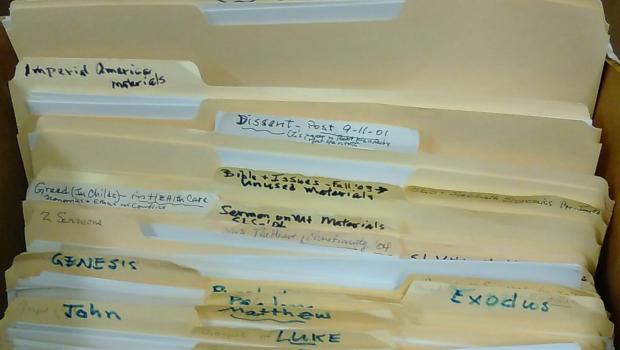 PHS recently brought into the collections the personal papers of Z Holler, a radical Jesus-follower, truth seeker, and Presbyterian. Our thanks first go out to Charlene Holler and the rest of Z's family, and to our friends in Salem Presbytery who spoke up on our behalf.

In Anderson, Z's church hosted a group of Freedom Riders. As his eulogist put it, "While they were there, he got a call from the Ku Klux Klan. They told him to stop. Z said no." While at Central Atlanta, following the assassination of Martin Luther King, Jr., Z and the church opened its building to visiting mourners, housing some and feeding more than 5,000.

Two months after Z returned to Greensboro, a confrontation pitting labor and communist activists against Neo-Nazis and the Ku Klux Klan ended with five leftists dead and more than 20 wounded. Z ministered to Greensboro's African American community and promoted inter-racial "truth speaking" in the wake of the massacre.

Upon his retirement from Covenant in 1993, with Rev. Nelson Johnson and Barbara Dua, Z organized the Beloved Community Center, a non profit devoted to racial and economic justice. In 2001, Z co-chaired the Greensboro Truth and Reconciliation Commission Project, which culminated in the formation of a truth and reconciliation commission to address the effects of the 1979 massacre, the first group of its kind in the United States.