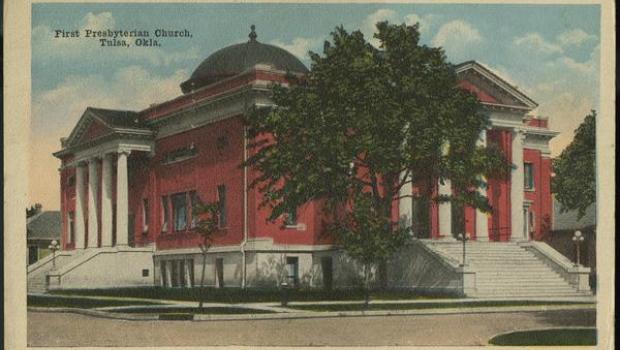 The Northern church began operating a mission day school in Tulsa in 1884; First Presbyterian Church was organized in 1885, holding services in a storefront. The city was incorporated in 1899, with a population of 1,100. Six years later, oil was discovered at Glenn Pool and the city grew prodigiously. By the time Oklahoma was admitted to the Union in 1907, Tulsa had 8,000 residents. The church built its first permanent sanctuary, pictured in the postcard above, in 1910, and its second sanctuary in 1926. By the year it hosted General Assembly, First Tulsa reported membership of 3,103, and an additional 2,100 children in Sunday school. The city's population had grown 900% since statehood, to 72,000 in 1920.

We recently digitized a short silent motion picture created by the PCUSA Board of Christian Education, including footage of the delegates, and aerial views of the city and countryside:

The unassuming host of the Assembly captured on film here, Charles William Kerr, would serve First Tulsa from 1900 until his retirement in 1941, and would serve as Moderator of the 144th General Assembly in 1932.

PHS's Records Archivist, David Staniunas, will be part of a joint presentation and will conduct an in-depth archives consultation at First Tulsa in June. Stay tuned for more reports from our Oklahoma journey.