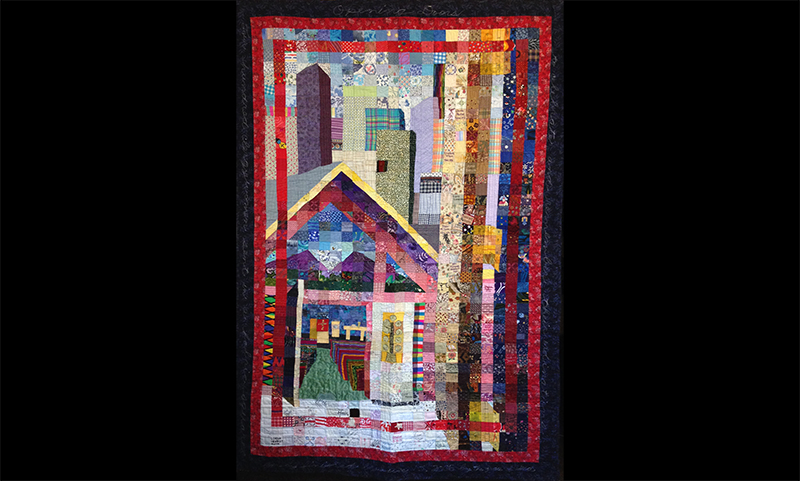 Blazing Trails is one of the three quilts that the Rev. Susan Barnes created to commemorate women's ordination in the Presbyterian Church (U.S.A.)

The Reverend Susan Barnes’s quilts are works of art—meticulous, expressive, and compelling. Susan created these quilts with small squares of fabric to commemorate women’s ordination in the Presbyterian Church (U.S.A.), and in the process connected past efforts at inclusiveness with new initiatives within the Church.

While focusing on women’s ordination[1], Susan wanted her quilts to show the service of all women in the Church. She began a letter writing campaign to congregations across the United States, inviting recipients to send her 2-inch x 2-inch squares of fabric. And send them they did. Susan received squares from over 1,000 churches, with some congregations shipping multiple swatches representing the diverse contributions women had made to their communities. Each square told a unique story. To name but a few: squares of Saedong, a traditional Korean fabric with vivid, colorful stripes; Mardi Gras-inspired fabrics honoring women pastors who ministered to those ravaged by Hurricane Katrina; African print squares honoring Arlene Gordon, an African American minister ordained in the PC(USA).

With the arrival of so many squares in every color imaginable, many covered in flower, animal, or geometric patterns, Susan set out to arrange the pieces. She did so by turning them into an artful witness to our community of faith, making three quilts each celebrating women’s ordination anniversaries: 50 years as clergy, 75 years as elders, and 100 years as deacons.

“Opening Doors” honors the first generation of women who became deacons and elders, and in the process opened doors for the first female clergy. Viewing the quilt as a whole, you look through an open door into a church, a city skyline behind. On the back of “Opening Doors” fabric squares form a clergy library depicting resources that feed the faith.

Clergy library stitched on the back of "Opening Doors"

“Building Bridges” came from a remark the Reverend Eileen Linder made to Susan: “We were slow to build bridges with our racial ethnic sisters, and I regret that.” As Susan explains it, the building of bridges is now an intentional, shared goal in the Presbyterian Church (U.S.A.). Looking at the full quilt, you see a bridge stretching across a river with a span of shadow below. The bridge depicted is a clapper style—a bridge common in Scotland, where so much Presbyterian heritage hails from. On the quilt’s reverse side is a Jerusalem cross.

Jerusalem Cross on the back of "Building Bridges"

“Blazing Trails” depicts a trail leading through tamarack pines, across green fields, and into distant mountains. Tamaracks turn bright gold in the fall and drop their needles, which Native Americans used in medicine. High-heeled shoe prints follow the path, signifying how even trailblazing church women were expected to adhere to prescribed social constraints of femininity.

Flames on the back of "Blazing Trails"

As you look at the photographs of these profound and beautiful quilts, pay special attention to the “holes.” Susan intended these negatives spaces to remind us of the work ahead that the Church faces—not only with regards to the inclusion and leadership of women, but to all peoples. Much like the squares of fabric, each individual is a particular story. Pieced together, we become a beautiful work of art, giving witness to Paul’s words that “We who are many are one body.”

Hole as seen on the back of a quilt