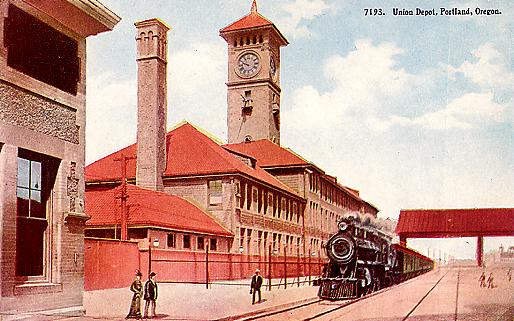 Note: This is the third of three blog posts on Fundamentalism and Presbyterians to run in 2015. Read the previous posts here.

Thousands of Presbyterians will gather in Portland over the next nine months for the PC(USA)’s Fall Polity and General Assembly, many traveling by plane across the country.

When Thomas Atherton, a commissioner from Lackawanna Presbytery in Pennsylvania, crossed the continent to Portland in 1892 for the 104th General Assembly of the Presbyterian Church in the U.S.A. (one of the PC(USA)’s predecessor denominations), it took him a week by train. Atherton, along with other Presbyterians from the East, traveled through Chicago, Minnesota, and the Badlands. From Glendive, Montana, on May 14, 1892, he wrote to his wife about the strange surroundings. “We are all crossing the plains for the first time; so if one shouts that a wolf or an Indian is in sight, the whole car-load, except perhaps a few too deep in the matter of preterition or the Briggs question, rush to that side of the car to see the object of interest.”[1]

The “Briggs question” was the great controversy at that year’s General Assembly.

In 1891, Charles Augustus Briggs became chair of Biblical Theology at Union Presbyterian Seminary in New York City. During his inauguration, Briggs read an address entitled The Authority of Holy Scripture. For nearly two hours, he argued that six common problems affect the way Christians study the Bible, including the belief in superstition, verbal inspiration, the authenticity of the scriptures, inerrancy, miracles, and predictive prophecy. “The Bible has been treated as if it were a baby,” Briggs said. “It has been shut up in a fortress, and surrounded by breastworks and fortifications as extensive as those that envelope Cologne and Strasburg. No one can get at the Bible unless he force his way through these breastworks of traditional dogmatism, and storm the barriers of ecclesiasticism.”

Briggs was an adherent of a new school of theology called Higher Criticism, which insisted that academics should subject the Bible to scrutiny as if it were a man-made work—using archaeology, comparative languages, and other academic disciplines. Briggs believed that studying the Bible in a critical manner brought one closer to God, and that the possibility of there being historical “mistakes” in the text did not place the Word’s divine origins in doubt. “These errors are all in the circumstantial,” he wrote, “and not in the essentials.”[2]

Higher Criticism stood in direct contrast to another nascent theological movement of the day: Fundamentalism. In this, too, Presbyterians were very active, with James H. Brookes, a Presbyterian pastor in St. Louis, leading the charge. Brookes spearheaded what became known as the Niagara Bible Conference, which was held annually from 1883 to 1897 in Niagara-on-the-Lake in Ontario, Canada.

The Niagara Conference was truly ecumenical, including Methodists, Baptists, Episcopalians, Congregationalists, and other Presbyterians such as J. Wilbur Chapman. Denominational affiliation mattered less than one’s attitude towards the inerrancy of the Bible. As David O. Beale would write about the conference a century later, “It is safe to say that, though Fundamentalism would have arisen without Niagara, it would have been very much different and the poorer for it.”[3]

Briggs and Brookes represented the two opposing strains of theology that would come to dominate American Christianity in the 20th century. But in the immediate aftermath of Briggs’s speech in 1891, few in the church were ready for his academic approach. His speech caused an uproar, with 63 presbyteries sending overtures to the 1891 General Assembly demanding a harsh response. Briggs was charged with heresy, though the Presbytery of New York City dismissed the charges in the Fall of 1891.

In Portland, the General Assembly would again debate the Briggs question. According to Atherton, few sided with Briggs. “It is manifest that the great majority of the Assembly are not with him in his ideas. Where ever it has been possible, every speaker has emphasized the authority and veneration due the Holy Bible…indicating that the speakers are not in sympathy with the doctrines of Briggs….[A]ll such allusions indicating such opposition have been greeted with applause.”

In addition to bringing eight specific charges against Briggs, the 1892 General Assembly released what became known as the “Portland Deliverance.” The statement decreed that anyone applying for the ministry must believe that the Bible “is without error.”[4] Ministers who believed otherwise were directed to withdraw from the ministry.

Despite the negative response to his 1891 address, Briggs had his defenders. The Presbytery of New York City dismissed the charges brought against him in 1892, just as it had in 1891. Union Theological Seminary, where Briggs had read his Authority of Holy Scripture, severed its affiliation with the PCUSA over the Briggs question and a host of other issues including the extent to which the denomination could control its seminaries. Although Briggs would be dismissed from the denomination at a third General Assembly, in 1893, he would later be reordained by the Protestant Episcopal Church.

In a letter dated May 26, 1892, Atherton wrote that Briggs was "not the man to organize or lead any great split in the church, it seems to me.” That proved true that summer in Portland. Today, we can see that Briggs was a harbinger of a great theological split, not just in Presbyterianism, but throughout Christianity.

[1] That letter, and others Atherton wrote to his wife about his month-long trip to Portland, are included in the Presbyterian Historical Society’s collections.

[4] Minutes of the General Assembly of the Presbyterian Church in the United States of America (Philadelphia: MacCalla & Company, 1892).