A Missionary Calling: I Sat Still to See the Salvation of the Lord 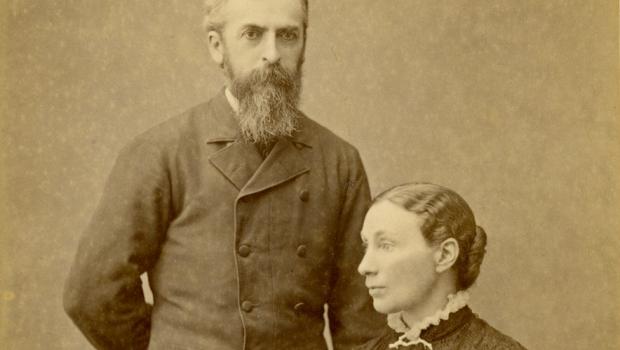 Mary Parke and her husband David Thompson served as missionaries to Japan for over five decades. In this installment from her diary, Mary writes about the initial resistance to David’s appointment as interpreter to the U.S. legation and about the acceptance of both Presbyterian and Union (interdenominational) churches. Mary also reflects on how much her life has changed since she left the United States to serve as a foreign missionary.[1]

Aug. 3: [1874, Tokyo]. Miss Gamble[2] … brought the letter announcing that the Yokohama part of the [Presbyterian] mission did not approve David’s taking the place of interpreter to the American Legation.[3]

Aug. 7: Married three months today, and how much dearer my love has grown I could not tell….Shima has come back….He told of his efforts at teaching the people the truth. Many come at first, but the number gradually grew less. His father and mother wish to believe, but do not yet pray to the true God. His grand-mother says the house would be dark without the idols. Another old woman said she could not pray unless she saw something….Some purchases—among other things material for a Japanese dress [kimono] for David.

Aug. 23: Am staying home from Japanese service that I may get well.—A mild bright day when it is easy to conceive of heaven and earth being one and peace overspreading all.

Aug. 25: David has gone to the funeral of an old woman, a member of the native church in Yokohama and the whole day I will be alone. I will spend it in paying some of my grievous debts in letter-writing. Okuno [Masatsuna] here. He told us of the death of his daughter, and that he was comforted because he thought she was a believer when she died.

Aug. 29: A meeting of our mission today to consult on the subject of Union. Dr. Ellinwood here. Everything much different and contrary to David’s expectations, in his favor, this fore-noon. His report to me was, “I sat still to see the salvation of the Lord.”

Board of Foreign Missions General Secretary Frank F. Ellinwood, circa 1880 (Image No. 4692)

Sept. 2: Our full work began again yesterday. I studying, teaching here and at Miss Youngman’s.[5] The desire to get on rapidly becomes very strong. My [Japanese language] teacher will stay all fore-noon with me and go up to recite with girls in the after-noon. This will make my number the sacred seven, and their souls are precious to me.

Sept. 5: Went to see Mizuno in the hospital in company with Miss Gamble. Took our lunch in a deserted tea-house in the pleasure grounds of Uyeno [Ueno]. A little boy followed us every where and stood and gazed upon us while we ate. When at length I presented him with several articles of food, his curiosity seemed fully satisfied, for he disappeared at once. After this Miss Gamble came home and we spent the day in making calls.

Sept. 7: A beautiful and rich [wedding] present received from Mr. and Mrs. Verbeck[6] today took me quite by surprise. It consists of five engravings from famous paintings, a beautiful glass flower stand, two books of poems, a rich bow of ribbon and velvet, and half a dozen cups and saucers with sugar bowl and cream pitcher of beautifully painted china ware. The mail came today too, bringing good news from home, but papers containing accounts of disasters in both the moral and physical worlds. Beecher’s trial in progress[7].…Father sent some flowers in the paper and in an envelope I sent to them. Their hands pressed it.

Sept. 8: It is one year today since we rode up the river in a little roofed boat and made that life contract.—Several missionaries on their way to China here today. Mrs. Crosett, Miss Cellars and Mr. and Mrs. Shaw.[8] Mrs. Crosett brought me a letter and pictures from Mr. And Mrs. Shrom. It brought strange sensations to meet those who knew my friends well. And with regard to Mr. Shaw the feeling was still stronger. He noted a queer little coincidence. Just two years ago today we rode into Savannah together in his uncle’s carriage and he remembered our conversation by the way. It was so strange that on the same day of the year I should welcome him to my own home and introduce him to my husband whose name even I did not know then. A marked day!

Sept. 9: Too many visitors, too many interruptions, much serving. At Miss Gamble’s for tea in company with Mr. and Mrs. Shaw and Mr. Leaman.[9] We got in to prayer-meeting just in time to sing the doxology. [The doxology comes at the end of the service in Japan.]

Sept. 10: A profitable morning with my teacher. No interruptions. The days are very full. Another boy wishing to be taught by me. David gone to see an officer of the Shihosho [Justice Ministry] who wishes to hear of the religion of Jesus.[10] Three men here to see him about receiving pupils to teach.

Sept. 12: Today spent at our missionary picnic and a delightful time we have had. We started from Dr. Palm’s[11] in a train of six “bashas” [horse drawn carriages] holding from four to eight persons. After a long ride and often getting out to cross narrow bridges, and go down and up hills, etc. we reached the pleasant spot settled upon by some of the party who knew the place. It was by the side of an old temple with its fresh green grass and grateful shade. The table cloths were soon spread and the ample repast arranged. The basha seats, with water-proofs, etc. were ranged round. We stood up and sang a blessing to the wise and bountiful Father, and then proceeded to partake of the provision. This was heartily entered into by all, and I think no one failed to do it justice. Meanwhile a company of men, women, and children quite as large as our own assembled and stood gazing upon us. And before we left they found they were no losers by it. One woman who had the remains of a duck rolled up in paper in her hand gave me a special look of affectionate regard as she want away.

Sept. 13: A typhoon has spent its fury today. The rain has ceased now and a lulling wind blows, and doubtless tomorrow will be bright with sunshine and pure air….Some of the native Christians came to service through all the wild storm some of those farthest away.

Sept. 15: Asaina is going to leave us too and go to Nakamura’s school….Matsudaira has gone home and expects to be married soon. Those I have known first and longest are leaving and changing…. My teacher seems a real treasure to me. I wonder when some change will take her away also.

Sept. 18: David away this after-noon to the preaching place near Asakusa. Made glad by the sight of the twenty or twenty-five earnest people assembled to listen.—Mr. Carrothers[12] asking David to teach in his school.

Sept. 19: Tomorrow is the Anniversary of the organization of the native church and so they had their meeting for business as well as thanksgiving today. Mr. Ballagh, Mr. Greene, and several of the Yokohama native Christians came up.[13] The meeting began at ten o’clock A.M. David read from the Bible, expounded, made his statement concerning the church during the year, and the many causes of thanksgiving to God which he and they had. He then offered during which there were many and frequent responses. After him Ogawa [Yoshiyasu] spoke and gave some statistics of the church. It was organized with eight members last year. There are now thirty five. He told too of the different preaching stations established and of the members in attendance. After him followed the report of Takahashi the deacon. Mr. Greene than gave an account of the work in Kobe and Okuno followed with a statement of the work and condition of the Yokohama church. After prayer by Okuno all adjourned to our house where Takahashi had provided a regular Japanese “bento” [box lunch] for them. The women all ate in our house and the men in Ogawa’s. Reassembling at the church, they transacted all necessary business and adjourned. All then went to Miss Gamble’s and partook of the tea and refreshments she had provided for them and enjoyed an hours’ pleasant intercourse together. They went to their homes with many thanks and kind adieus, and as our thoughts go after them we rejoice at what the grace of God can do. Mr. Ballagh came down home with us and stayed a little while. He read to us an account of his preaching tour to Hakone, etc. which he had prepared for his wife. And it was truly wonderful and inspiring to hear.

Sept. 20: David’s room full this morning with his class. Mr. Soper[14] preached to the foreigners, Ogawa and David to a full house of Japanese. My Sabbath school exercise in the morning very profitable.

Sept 21: This is David’s birthday—he is thirty-seven and I have had nothing to give him except myself more fully, if that were possible.—Changes made in our bedroom.—At tea with Dr. and Mrs. Palm this evening in company with Mr. Cooper and Miss Gamble.—David’s class is ended and now, my diary, good night—you will not blame me now for negligence whenever my darling claims me.

Sept. 22: At tea at Mr. Piper’s in company with Mr. and Mrs. Tyson[15]. A very pleasant evening passed together, with prayer at its close. It did me good in that I shall be able to think more charitably of Episcopalians in future.

Sept. 23: Rainy, and I did not go up to school. I was feeling a little unwell, too. A long ride to the fruit market – A basket of grapes bought that we will feast upon.—Received our home mail, a letter from Rebecca.

Sept. 26: Forenoon most enjoyably and profitably spent with my teacher reading the Scriptures in Japanese much of the time. All the after-noon for both dinner and tea spent at Dr. Faulds’.[16] And what a home feeling the friendly old way brought to me! God has not denied us here the pleasures I thought I was leaving when I left my home, at all. An opening, brightening mission field, and these innocent joys too!

[1] The Presbyterian Historical Society received the Thompson Papers in 2011, a collection that includes Mary Parke Thompson’s seven handwritten diaries. PHS volunteer Sue Althouse, herself a retired missionary to Japan, has been processing the Thompson Papers, and she has chosen excerpts from Mary’s diaries to share with readers. To see other excerpts, select the Mary Parke Thompson tag from the right hand menu of our full blog. Posts will be displayed in reverse chronological order.

[3] Despite the opposition, David did not withdraw from consideration as the official interpreter to the U.S. legation. President Grant formally placed David’s name in nomination before the U.S. Senate in Dec. 1874, and David served as interpreter until 1881.

[4] Board of Foreign Missions General Secretary Frank F. Ellinwood and his second wife, Laura Hurd Ellinwood. Frank Ellinwood (1826-1908) served as General Secretary from 1871 to 1907. His 1874 trip to Japan was part of a round-the-world trip to visit Presbyterian mission posts.

[6] Dr. Guido Verbeck was a missionary of the Dutch Reformed Church.

[7] Renowned pastor Henry Ward Beecher, son of Lyman Beecher and brother of Harriet Beecher Stowe. In the 1870s, he was one of the most famous clerics in the United States.

[10] David had to wonder if this man were interested in the religion itself, or if this were just another form of surveillance.

[11] Dr. Theobald A. Palm of the Edinburgh Medical Missionary Society.