A Missionary Calling: Papers Into the Sea 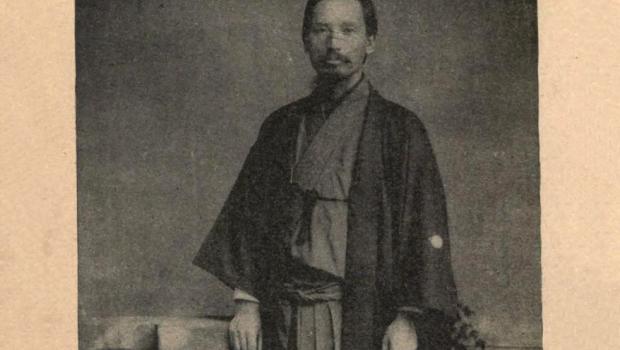 Mary Parke and her husband David Thompson served as missionaries to Japan for over five decades. In this seventh excerpt from her diary, Mary writes about the pressures felt by Japanese converts to Christianity as well as developments in her relationship with David.[1]

Oct. 10 [1873]: The mail came bringing letters from Father, Minnie and A.D. Lehmann, Mr. Lehmann asking me to be a regular correspondent of the Brainard Society of Wooster University.

Oct. 11: I had decided to go out calling with Mrs. Carrothers this after-noon, but Mr. Carrothers’ arrangement of the matter brought me to other conclusions.[2] He has gone himself. Pen, why did you make a blot there? for now, at this present after praying more earnestly than I have been enabled to do for some time, in my inmost soul I thank God for these little trials. In my love and happiness I might grow too secure and forgetful without them. These hours this Saturday after-noon alone are just what I need and so, through a little pain God gives them to me. It is the very pain that makes them profitable. O for daily grace and strength to live a blameless life in this house-hold....I will tell Mr. Thompson none of these things to grieve him or stir him up. O that the grace of the Savior may continually over-come the evil that is in me. No bitterness must be harbored.

Oct. 13: A sad affair came to us today. Yoshida, Miss Youngman’s teacher, [3] came up from Yokohama to tell of the trial of one of his brother Christians. This young man since professing Christianity has been two or three times remanded home by his father. The son not obeying, fearing to obey, the father in great wrath has come to Yokohama to compel his return. As [Mr. Thompson and I] took our little walk this evening, we had a most quietly strengthening talk on how God might, and doubtless would bring good from all these things....Either walking out or walking on the verandah are almost the only opportunities we have of seeing each other now. Though this is disappointment to us, it gives an opportunity of cultivating good graces that are very much needed to keep the soul strong and tranquil.

Oct. 14: Yoshida is going with [Masayoshi] Oshikawa to his home to see that no violence is done him there. Mr. Thompson has resolved out of the tuition of our scholars, to give to him fifteen dollars each month for three months to pay his expenses while away. A pleasant walk after school. Saw a woman throwing a great many little papers into the sea. We came and sat down on the stone near her and Mr. Thompson asked her concerning her worship but she did not tell him, and immediately walked way. We gathered several of the little papers that had stuck on the bank and found they all had the same thing written on them, a prayer to Buddah.

Oct. 16: A pleasant, profitable day. I seemed to understand better than usual what was said in Mr. Thompson’s class today, and this gave me real pleasure.—A little tired sitting still so many hours each day, a greater variety of occupation would make each task more lightsome. Not in the spirit of complaint is this written, for how much brighter and more varied is my lot than it might have been!

Oct. 20: Deeply thankful for the evidence of the power and extent of the Spirit’s work in the hearts of the two young men who go out to meet trial, Yoshida and Oshikawa, and also of the true Christian spirit of O Kin San. Mr. Thompson is so glad and assured. They came to see Mr. Thompson before supper. O Kin San naturally and truly filled the place of an elder’s wife. She provided their meal and talked to them with so much sympathy and kindness. After supper they had a long talk with Mr. Thompson over all the circumstances in their case. Oshikawa’s obstinate father-in-law, the probable sympathy of others, whose hatred of foreigners and foreign customs and a foreign religion is not so bitter, the young man living in the same neighborhood who abandoned his faith, the gloomy aspect things assumed at first, but now the happier. They had prayed that they might have an opportunity of making known the truth to their friends and neighbors, now God gave them this opportunity, indeed put them in a position where they must, of Oshikawa’s mother so eagerly hearing the news of the true God….Then [Mr. Thompson] knelt to pray with them. After the conclusion of his prayer they both successively prayed…both with such fervor and breadth and power that Mr. Thompson is filled with devout joy and wonder. He feels such a strong assurance that God goes with them. And how great the good resulting from all this who may tell!

Oct. 25: This morning a long walk, some little purchases, and Mr. Thompson’s negative taken by a Japanese woman.

Oct. 26: Gloomy in the morning, but brightening as in life I have seen it. Mr. Thompson had an encouraging congregation of Japanese. It was his turn also to conduct the foreign service….When his class was over this after-noon we had a little time alone. Then Dr. Vrooman[4] came in. We talked of the ministers in New York. I fear my words were too severe concerning some of them, not full enough of charity. O, the unruly tongue and the unruly heart too that thinketh! Let me keep a close guard. Let me go for more grace for Him who alone can keep me from falling.

Oct. 28: Such varied experiences that my heart sinks and rises.—Went this morning to see Mr. Thompson’s negative. It is as good as I expected them to take here. I am not indifferent to the kind of a picture that goes home, though I want it to look only as his dear kind face looks.

Nov. 1: In the after-noon called on…the Kaiseijo[5] people. Walked there but rode back. Pleasantly impressed with Mr. [Guido] Verbeck. His smooth, kindly voice is very musical….On returning, found Mr. Thompson back from Yokohama. After dinner he brought over the very nice blanket which he had purchased for me. As the Japanese girls are all gone home this evening, we have had a room in which to spend a while together. And how happy has been the time with my darling God-given friend. Miss Youngman seems unhappy and ill at ease.

Nov. 3: In our walk this morning Mr. Thompson said much of the uncomfortable situation in which he is at present placed, of the trying and annoying circumstances that surround us both, and of the necessity of hastening our marriage. Perhaps he was a little grieved at my reluctance. I feel that it is all too true what he said and my thought becomes happily settled in this that I did what was right and best when I yielded. And now, we may be married in April next, perhaps on the anniversary of my arrival in Japan. With what a light heart after all may I accept the cares that come with taking the place of a wife when I am to have such a husband. Not at all for lack of love or confidence have I had the feeling to shrink back a little and make the time longer. – He told me of an invitation with Ogawa and his wife to take dinner at the home of one of the members of the native church. So my teacher came and had to return home again, not however, without telling me that we would go past her home and must call….[]

She wanted her father to see me. At ten o’clock we set out, and the day being so perfect we preferred to walk. The people surely are loyal if taking this as a holiday and raising the red-globed flag of Japan on this their young emperor’s birth-day is any sign. Over each door and window it seemed a flag was swung. Reaching the home of Kowai San [her teacher], we were very kindly received, shown pictures, treated to tea, grapes, persimmons and sweet-meats, and shown about the grounds. Her father seems very lively and active, though an old man….[]

From here taking jinrikishas we went on to our destination. The neat home, the pleasant grounds with their ornamentation, the flowers, the vegetables, the tea plants, all were objects of interest to us, and became much more interesting when Mr. Thompson told me that we might be able to get this for our future home. The dinner came at length, consisting of several courses served much after our fashion, Mr. Thompson and I sitting at one of the tables and Ogawa and our host at the other. He excused his wife saying she was not accustomed to eat foreign style. She and Ogawa’s wife waited upon us, the servants not appearing before us. Mr. Thompson asked a blessing on the food, and after the meal was over, the women came in and we all knelt down while Ogawa offered a full earnest prayer, if I may speak and judge from the little I can yet understand of this speech. And O, what a sanctified home this made it seem! The wife of this man is now an applicant for baptism. Reverently she knelt with us. The whole visit was only pleasure-giving. Our walk through Shiba, and return home by one of the old ways we have learned to love must not be left out of the pleasures of the day. We saw some richly dressed officials in foreign carriages, who had been paying their respects to the Mikado, doubtless. Now with night around me in my own room gratefully I remember our heavenly Father’s tender care, and the sense of the nearness of Heaven wherever our steps go. O that we may never wander from the blessed fold at all—that we may be the means of leading many, many into it!

[1] The Presbyterian Historical Society received the Thompson Papers in 2011, a collection that includes Mary Parke Thompson’s seven handwritten diaries. PHS volunteer Sue Althouse, herself a retired missionary to Japan, has been processing the Thompson Papers, and she has chosen excerpts from Mary’s diaries to share with readers. To see other excerpts, select the Mary Parke Thompson tag from the right hand menu of our full blog. Posts will then be displayed in reverse chronological order.

[5] Kaiseijo – a government agency involved in modernizing the government. Dr. Guido Verbeck was a missionary of the Dutch Reformed Church who was hired as a consultant by the Japanese government. He was one of the first Protestant missionaries to arrive in Japan and is credited, along with J.C. Hepburn and S.R. Brown, with being one of the founders of Meiji Gakuin, an important Christian secondary school and university in Tokyo.