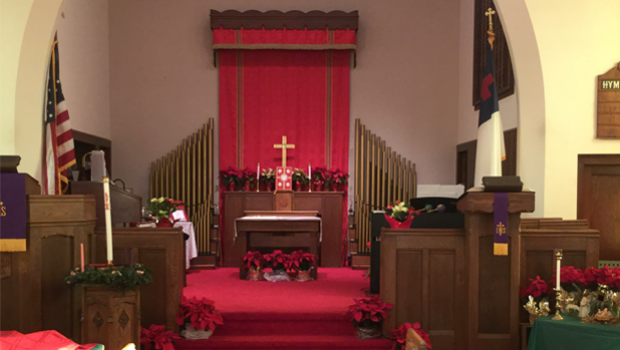 A committee of the Presbytery of Chester organized the Memorial Presbyterian Church of Upper Chichester at 3217 Chichester Avenue in Boothwyn on June 17, 1886. Situated in a semi-rural area near the boundary between Pennsylvania and Delaware, the church experienced slow growth, reaching a membership high of 236 in 1960.  The church by that time was known popularly as Boothwyn, because of its location. The name was changed officially to Memorial Presbyterian Church of Boothwyn in 1965.

The congregation divided in 1943 over the call to a minister. The dissident group established the Reformed Presbyterian Church of Boothwyn a few blocks away from Memorial. The Memorial congregation continued to grow in spite of this division until 1960. From that point membership declined every year to 85 in 1990, and the church school enrollment dropped from 112 to 26. This happened even though residential development in Boothwyn and the surrounding area provided an opportunity for further growth.

Despite the drop, we are still a Community of believers serving the Boothwyn Community in the 21st Century. Five years ago the Session and the congregation of the Memorial Presbyterian Church began on a journey for the kingdom through their evangelistic outreach. We have focused on the needs of the community. We have a diverse congregation and members are from many denominations: Catholic, Methodist, non-denomination, where all ages and various ethnic groups are represented. We began diversifying our worship to include a worship team to lead worship, along with choirs, instrumentalists, The Bells, Bible Study, Children’s Program, and a food pantry. Publications included: newsletters, community TV bulletin boards, and flyers announcing events to the Boothwyn Community and a mailing to members and non-members.

The session has formed their committees and this process aided in the development and implementation of a variety of programs. All of this kept and keeps the community informed and they respond by attending events. We are known in the community as the Church that is always doing a community event that engages everyone who attends. Memorial Presbyterian Church has established 5 programs to refocus us on our church growth.

Monday morning, April 17, 2017, we watched as fire destroyed the inside of Memorial Presbyterian Church. An emergency meeting was called to discuss the fire, the investigation, and the many invitations from surrounding churches to use their facilities. It was decided that we would accept the invitation of Linwood Heights United Methodist Church until our Church is rebuilt. We have members who could walk to Memorial Pres., but since our place of worship is now further away, we have established a transportation service where members pick up people who need a ride.

Even though the Church burned, we will continue to depend on our programs to support our work in the community and follow the calling of Christ for our Church. We have even added a Camp Meeting Series co-sponsored with the Linwood Methodist Church.

We look forward to continue growing in faith, hope and love….for the greatest of these is Love!