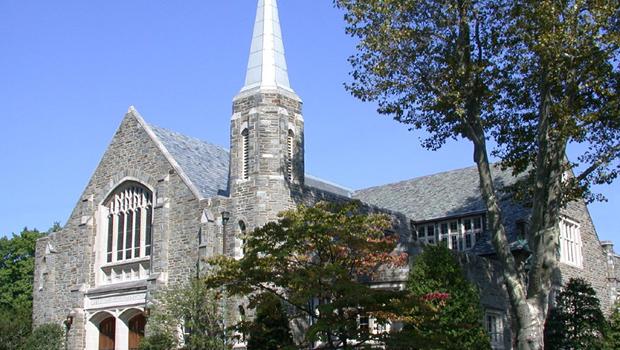 On June 1891, Narberth Presbyterian Church began at the corner of Windsor and Grayling Avenues in Narberth, a tiny borough of half a square mile in area. In its 126 years, the church building was destroyed by fire in 1896, rebuilt in 1897, expanded in 1925 and 1956, and, in the last two decades, it was further reconfigured and equipped with modern technologies to meet the changing needs of its ministries.

As NPC’s twelfth pastor and the one with the longest tenure, Rev. Stephen N. Weed has in the past 26 years led and encouraged staff and lay leaders alike to shepherd the congregation toward being a Christ-centered, biblically-based church, living out the three-pronged message of “growing up, growing together, and growing out” to fulfill God’s Great Commission.

NPC has long been a launching pad for those who sensed God’s call into Christian service. From this congregation, more than thirty have been ordained to pastoral ministry, another seventeen commissioned to missionary work across the globe, and countless more have volunteered their time and talent in ministries at the church, locally, and in short-term missions. While people come and go, NPC remains a neighborhood church with a heart and vision that go beyond its immediate environs. Its motto—to build disciples in the love of Jesus Christ—adopted in 1998, imbues the congregation with a sense of purpose. Members and friends who attend regularly use the word “family” to describe this diverse community of faith. Even so, they are nevertheless reminded that NPC exists as much for those outside the walls of the church as it does for those within.

In addition to sharing the Good News of salvation in Jesus Christ from its Windsor and Grayling Avenues location, NPC has an active presence in the Narberth borough. Seven days a week, for an hour the choir room is home to the longest-running Alcoholic Anonymous meeting on the Main Line. Once a month, on Parents’ Night Out, parents in the community are invited to drop off their children for a few hours of free activities. Kickball with the Pastor, also open to neighborhood children, has been going on each week since 1998. Volunteers help out at Narberth’s Fourth of July festivities. In the weeks before Christmas, homemade cookies are delivered door-to-door to families and businesses as the Dickens Festival gets underway. The Gifts of Hope Gallery and the benefit concert featuring Found Wandering have become anticipated year-end events to raise funds for charities and missionary organizations. Last, but not least, the Narberth Presbyterian Christian Nursery School has been serving families in Narberth and nearby neighborhoods since 1985.

Further afield, NPC partners with various ministries in the greater Philadelphia area through financial giving and volunteer work hours. Through organizations such as The Philadelphia Project, Habitat for Humanity, Neighborhood Crusades, Amnion Crisis Pregnancy Center, Presby’s Inspired Life, Quilts for Comfort, Cornerstone Christian Academy, and Timothy Academy, NPC folks offer help and relief in areas of healthcare, housing, and education. Campus ministries are also supported through CRU and InterVarsity Christian Fellowship. Beyond the regional focus, NPC’s Mission Cause Ambassadors serve as liaisons for many missionaries to keep the congregation informed of the joys and challenges of God’s kingdom work in Eastern Europe, Africa, Asia, and Central America.

NPC celebrated its 125th Anniversary on June 2, 2016. It is humbling and exciting to bear witness to the work of the Holy Spirit in a vibrant and growing congregation. We look forward to seeing what God will do in and through this church in the next twenty-five years. To God be all the praise and glory.