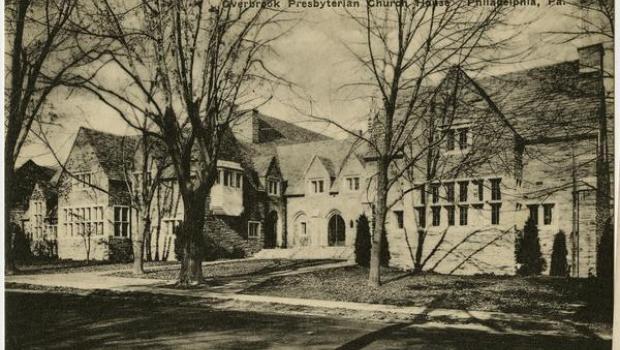 Overbrook, the “Church at the Crossroads”, was founded in 1889, when the cornerstone of the original church was laid on land donated by Wistar Morris, a wealthy Quaker who lived in the area.  The location, at the intersection of City Avenue (Route 1) and Lancaster Avenue (Route 30), proved to be strategic.  The building, which has since been enlarged and renovated, is listed as an American Presbyterian and Reformed Historical Site, and is also on the U.S. Department of the Interior’s National Register of Historical Places.

The church has been engaged in mission activity almost from the start.  In 1895, the church provided funds which resulted in the establishment of the Overbrook Hospital in Chiang Rai, Thailand, now a modern full-service hospital.  To take advantage of underutilized Sunday School rooms, the Overbrook Preschool was created in 1965 and continues as the Overbrook Preschool and Kindergarten, an independent entity.  The Women’s Association, which was very active in mission and other projects in the mid-20th century, has been affected by the increase in educational and career opportunities available to women and is now inactive as such.

Music has played an important role at Overbrook.  The Geist Memorial Organ was installed in 1939 and has, in the hands of a series of talented organists, provided music for congregational hymns, concerts and recitals.  Overbrook has had a quartet of professional singers for many years.  The Overbrook Choir was founded in 1965 and the Westminster Handbell Choir in 1972.

Overbrook’s membership, which reached its peak of 1500 in 1950, has since declined due to demographic changes in the area, but the church has continued to welcome all comers as brothers and sisters in Christ, and the congregation of about 400 is racially and ethnically diverse and enthusiastically engaged in all aspects of church life.

This brief history was recently updated as a part of the Presbytery of Philadelphia’s 300th Anniversary Year of Celebration and Witness. The story of the congregations throughout the Presbytery were revised to remind us of our past even as we live into the present and move towards God’s promised future. Read more about the 300th Anniversary: www.presbyphl.org/300th-Anniversary.