African American perspectives and experiences remain under-represented in the annals of Presbyterian history. This collecting initiative redoubles PHS's efforts to document Black lives, work, and witness in an increasingly multicultural Church—from the organization of the First African Presbyterian Church in 1807 to the election of the first African American stated clerk of the PC(USA) in 2016.

We are bringing human and capital resources to bear on collecting records of the Black Presbyterian experience--both the personal records of longtime church workers, and the original records of Black congregations. PHS seeks to represent in the archives the Black throughline: the integral presence of African Americans in what the authors of the historical volume Periscope called a “historically racist ecclesiastical body.”

Gayraud Wilmore Papers, 1848-2019, RG 526. Gayraud Wilmore was a theologian, scholar, and activist. He was named the first executive director of the United Presbyterian Church in the U.S.A.'s Commission on Religion and Race (CORAR) in 1963. He traveled to Presbyterian churches to train pastors in how to organize protests and lobby for civil rights, and joined demonstrations throughout the South. Wilmore also helped found the National Conference of Black Churchmen in 1969 and was instrumental in the creation of the UPCUSA Presbyterian Committee on the Self-Development of People in 1970. He served as the executive director of CORAR until 1972. He died in 2020. Our thanks to Jack and Carmen Wilmore for delivering these records to us in July of 2019. 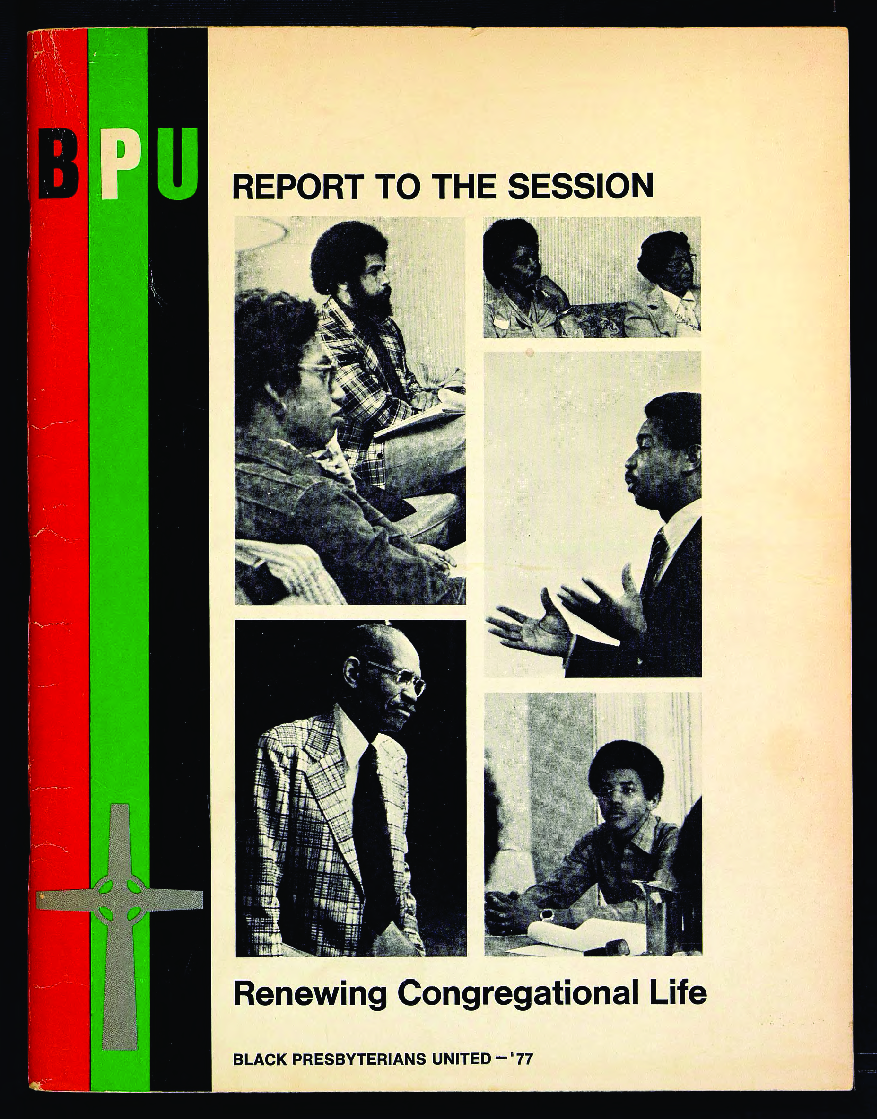 View selections from the Wilmore papers in Pearl.

In a 1982 interview conducted at Newark Airport and in Rochester, N.Y., Wilmore reflects on "taking my own theology to the streets" as director of the UPCUSA Board of National Missions Division on Church and Race. "I am convinced that one cannot do theology from a library carrel or from a study desk."(Cassette 857-858) 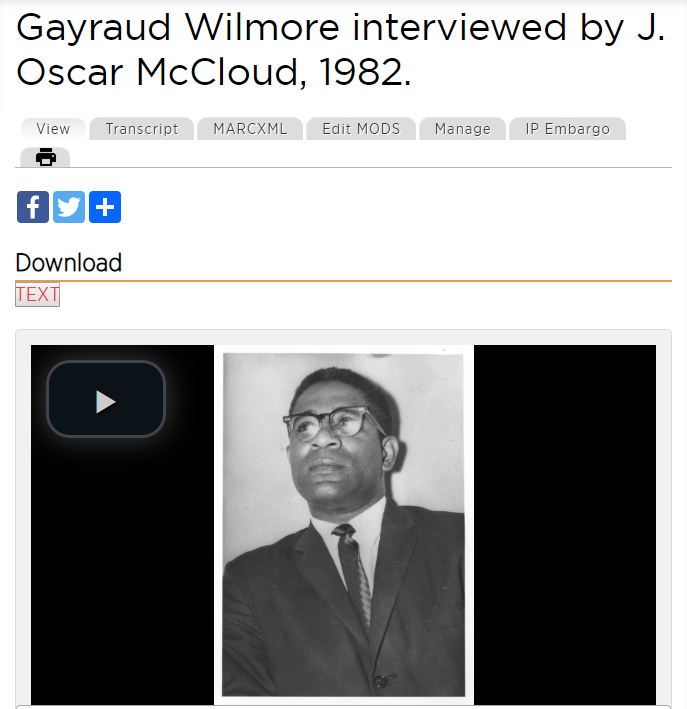 African American Synods collection, 1873-1988, RG 395 consists of published minutes, select photographs, and newsletters of the historic UPCUSA all-Black governing bodies, including this gathering of leaders from the Synods of Atlantic and Catawba in the 1960s. 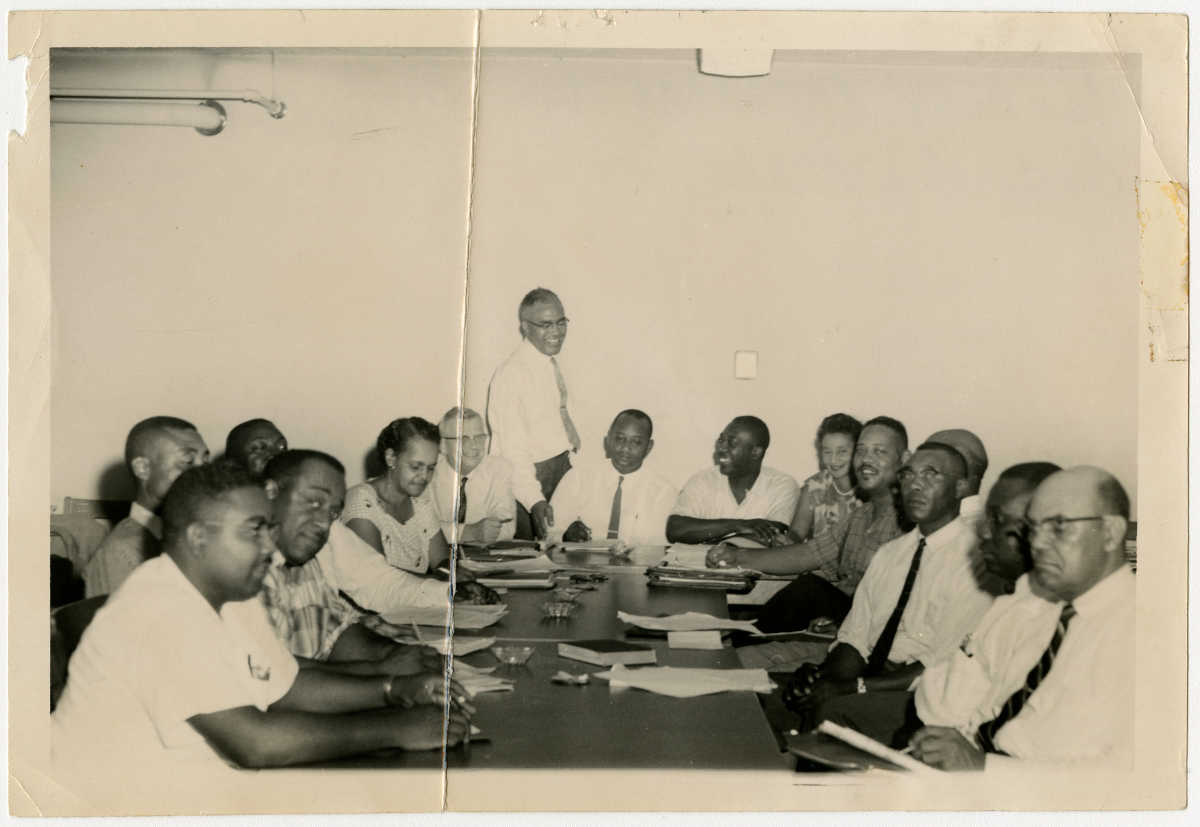 View selections from this collection in Pearl.

Katie Geneva Cannon papers, 1972-2018. Katie Geneva Cannon was the first Black woman ordained a minister of word and sacrament in the Presbyterian Church. She was born in 1950 in the Fisher Town neighborhood of Kannapolis, N.C., one of the seven children of Corine and Esau Cannon. She graduated from Barber-Scotia College (Concord, N.C.), completed a Doctor of Divinity at Johnson C. Smith Theological Seminary, and was the first African American to complete a Doctor of Philosophy at Union Theological Seminary (New York, N.Y.). She was ordained by the UPCUSA Presbytery of Catawba in 1974. A definitive voice in Womanist theology, Cannon specialized in Womanist/feminist/mujerista ethics, teaching at Temple University, and Union Presbyterian Seminary in (Richmond, Va.). She died August 8, 2018. Our immense thanks go out to the Cannon family for delivering this material to PHS in 2020. Additional material from Katie's life and work is held at the Center for Womanist Leadership at Union Presbyterian Seminary in Richmond, Virginia, and at Union Theological Seminary, New York, New York. 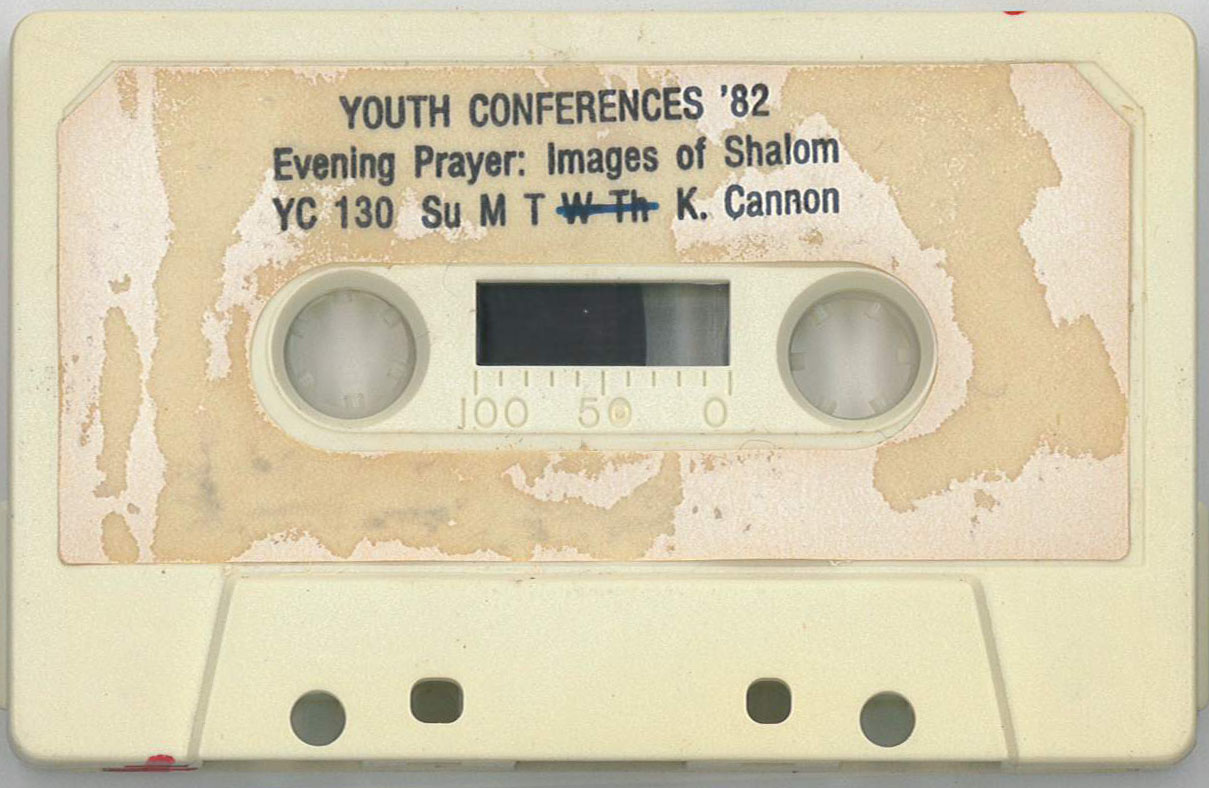 First African Presbyterian Church (Philadelphia, Pa.) is the oldest Black Presbyterian congregation in the United States, organized in 1807 by John Gloucester, a man born into slavery in Tennessee in 1776. Extensive records of the session, and of the John Gloucester Memorial Society, are held in Record Group 314. 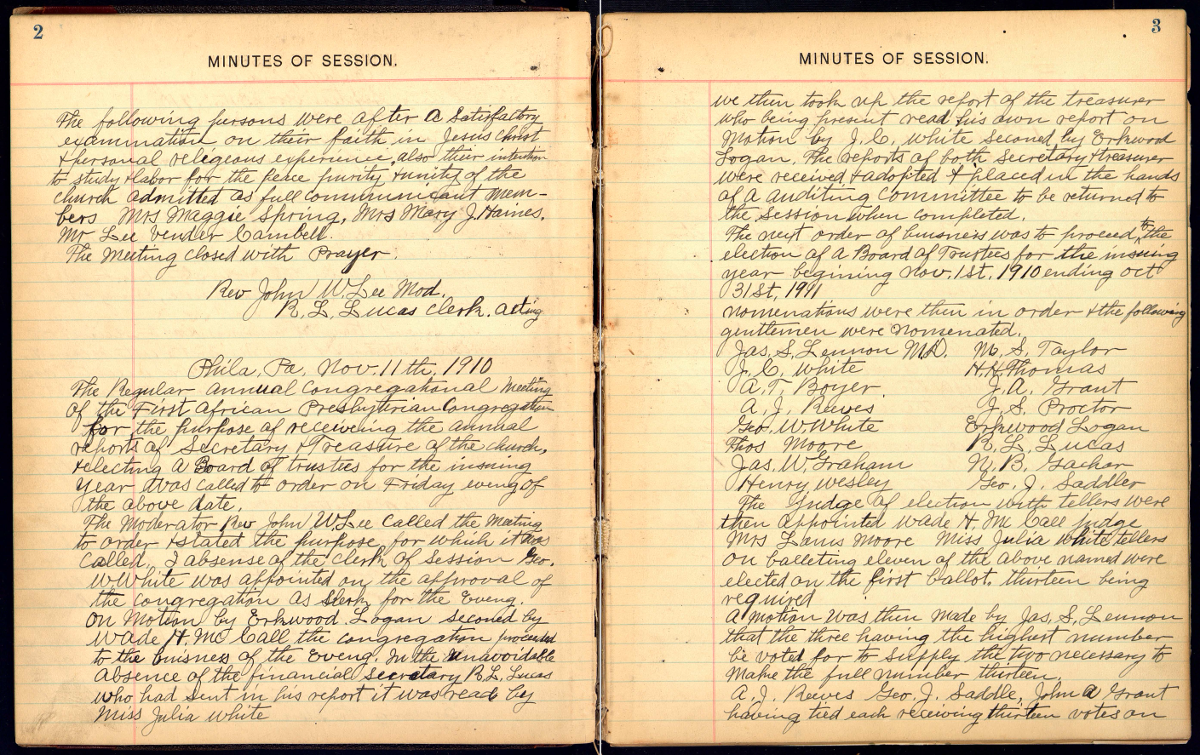 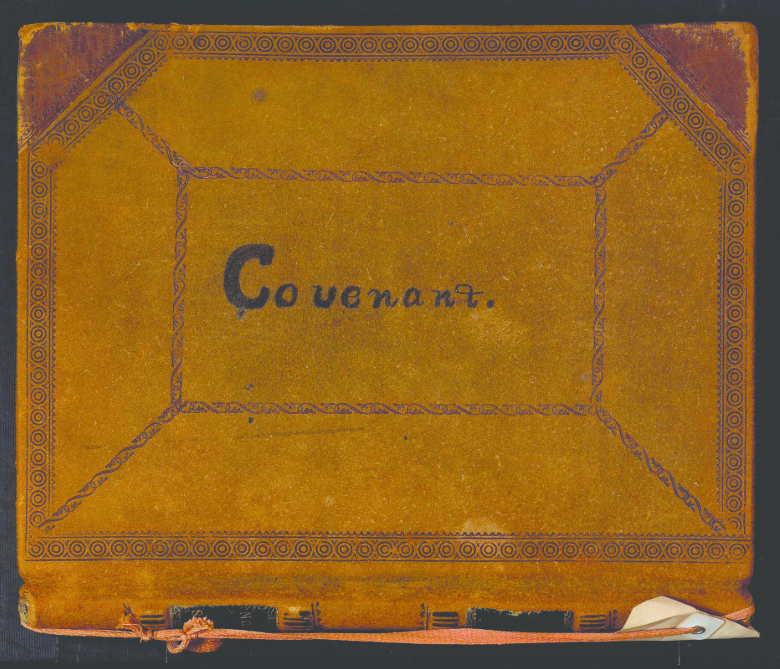 --Thelma C. Davidson Adair was the first African American woman moderator of the Presbyterian Church, elected by the 188th General Assembly in Baltimore in 1976. In a 2008 interview, Adair reflects on the work of Church Women United to create "causeways," uniting women across continents. 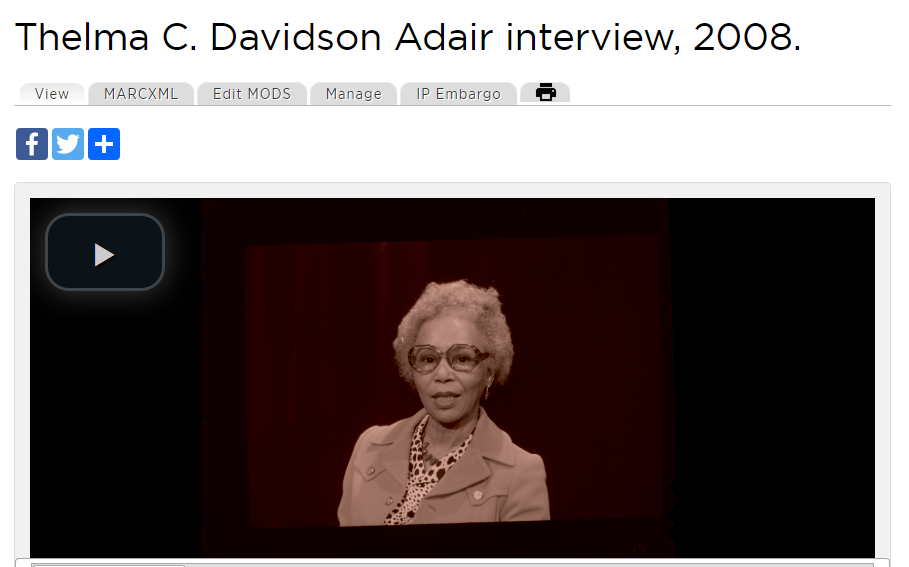