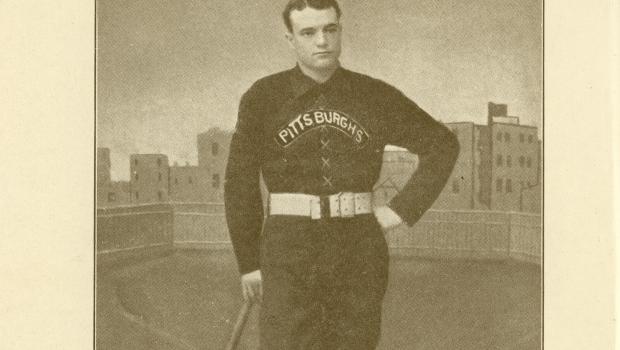 The hellfire-and-brimstone preacher with a knack for stealing second, the master of the fadeaway, a mild-mannered Whiz Kid, and one lucky fan: with great relief that Major League Baseball's pitchers and catchers have reported to Spring Training in Florida and Arizona, we bring you four stories of baseballing Presbyterians.

No history of baseball and Presbyterians can ignore Billy Sunday. Born William Ashley Sunday, son of William Sonntag, near Ames, Iowa in 1862, Sunday was discovered playing for a fire brigade team in Marshalltown by the legendary Cap Anson. He debuted May 22, 1883 for the National League's Chicago White Stockings, striking out four times. Known for his speed if for nothing else, Sunday had 71 steals in 133 trips to the basepaths in 1888 for the Pittsburgh Alleghenys, and chalked up 84 stolen bases for Pittsburgh and Philadelphia in 1890, his last season in the majors. In 1891 he was recruited as an itinerant preacher by the Presbyterian evangelist J. Wilbur Chapman. Sunday headlined his first revival in Garner, Iowa in 1896. He was licensed by the Presbytery of Chicago in 1898 and ordained in 1903. Sunday related the story of his ordination exam at McCormick Theological Seminary in baseball terms:

Professor Zenos [...] asked me about Saint Augustine, I replied, "He didn't play in the National League, I don't know him." So I muffed the first ball he threw at me. I tried to steal second, but they caught me between bases. The umpire, Dr. Herrick Johnson, then said, "Mr. Moderator, I move this needless examination stop. What difference does it make if he knows about Alexander, Savonarola and Cleopatra, or 'Pop' Anson? God has used him to win more souls to Christ than all of us combined [...]1

Sunday's preaching style relied on his athleticism. One biographer writing at the height of the preacher's fame depicted Sunday crawling, kneeling, leaping and gesticulating: "In a dramatic description of the marathon he pictures the athlete falling prostrate at the goal and --thud!-- there lies the evangelist prone on the platform. Only a skilled base-ball player, with a long drill sliding into bases, could thus fling himself to the floor without serious injury."2

Using baseball as an attraction, Sunday built a huge following as a traveling preacher, ultimately receiving millions of dollars in donations, and carrying a staff of 26. Between 1914 and 1917, Sunday earned $600,000 in personal income. Under criticism for "merchandising souls," Sunday was indirectly chastised by the General Assembly in 1918, which put a salary cap on evangelists.

Two Presbyterian pitchers are in the Hall of Fame: the first, Christy Mathewson, was born into a Baptist family in Factoryville, Pennsylvania, but converted to Presbyterianism to win the hand of Jane Stoughton of Lewisburg. The couple were married March 4, 1903 in First Presbyterian Church (Lewisburg, Pa.), and almost immediately decamped for Spring Training. Mathewson and his trademark fadeaway -- akin to a screwball or hard cutter -- won 373 major league games, 100 of them between 1900 and 1904, and threw 79 shutouts. He served in the U.S. Army Gas and Flame Division during the First World War, contracted tuberculosis, and after years of convalescence and relapse, died of tuberculosis pneumonia on October 7, 1925, just after the first game of the World Series. Known as "The Christian Gentleman," Mathewson was immediately made into myth: before the second game, the flag at Forbes Field was lowered to half mast, and the crowd sang "Nearer, My God, To Thee."3,4

The second Hall of Famer, Robin Roberts, hero of the 1950 National League champion Philadelphia Phillies, was born in Springfield, Illinois, in 1926, and grew up attending Springfield's Fifth Presbyterian Church. Roberts led the National League in wins from 1952 to 1955, for a parade of mediocre Phillies teams. The May 28, 1955, issue of Presbyterian Life featured Roberts at the height of his fame, reading the week's Sunday school lesson to his children, described by friends as "a normal human being--and the greatest pitcher in baseball."

We'll end with a story of Connie Mack doing a solid for an ordinary fan. James L. Grazier, graduate of Muskingum College and Princeton Theological Seminary, was serving Central Presbyterian Church (Norristown, Pa.) when he first wrote to the Philadelphia Athletics asking for a charitable donation, namely season tickets. Connie Mack's franchise had been foundering for the better part of two decades, so donating tickets to a nearby minister would cost Mack nothing and at least put bodies in seats. Central was a hotbed of Presbyterian baseball fervor, fielding baseball and softball teams through the 1940s. Grazier got used to the privilege, and repeated his request every year.